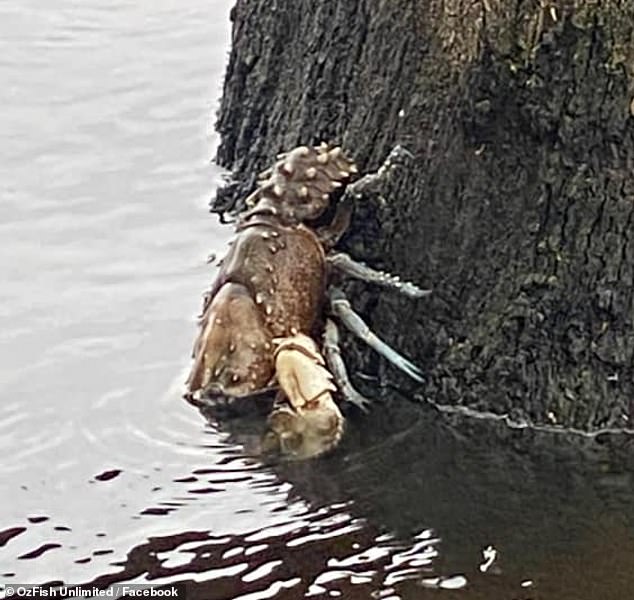 Thousands of Australians in flood-affected areas have witnessed animals leaving the water in an indication that a massive fish die-off is imminent.

The Murray-Darling Basin Authority issued a warning on Monday that excessive amounts of floodwater entering the system might lead to widespread blackwater occurrences, fish fatalities, and blue-green algae outbreaks.

A ‘blackwater’ occurrence occurs when there is a sudden loss of dissolved oxygen in the water, typically following floods that washes organic matter into rivers.

Murray cod, a native of the Murray River, has exploded in popularity in recent years, with Australian fine dining establishments purchasing the fish at unprecedented rates for their menus.

Hundreds of crayfish were captured on camera exiting the water and clinging to the shores of the Murray River.

Animals leaving the water is one of the earliest indicators of an impending catastrophe.

Renee Ferenc, director of engagement and culture at OzFish Unlimited, stated that blackwater episodes around Victorian rivers were sapping oxygen levels and will soon have dire consequences for animals.

She stated that while blackwater episodes can be beneficial in tiny doses, the most recent one has put an excessive amount of strain on the system.

She stated, “You have all of this organic material in the river that begins to disintegrate.”

As bacterial activity increases, oxygen in the water is consumed, resulting in deoxygenation of the floodwater.

“Hypoxic blackwater episodes can occur rapidly and are often brief, but they can have a devastating effect on the waterway during their duration.”

Ms. Ferenc reported that volunteer rescue teams were racing to save Murray crayfish populations that had been detected sheltering on riverbanks.

Once the event was over, the crayfish would be transferred to holding tanks provided by the NSW Government and released to the basin.

She stated that Murray crayfish are among the native species that are susceptible to hypoxic blackwater episodes.

In essence, there is insufficient dissolved oxygen in the water for them to survive, therefore they emerge onto the riverbank or climb trees and logs to escape.

‘They will remain there until the blackwater event has passed, and if they survive, they will return to the river. Sadly, the majority of them do not survive.

They are slow-growing and can take up to nine years to reach reproductive maturity; hence, the loss of any juveniles will diminish their future reproductive potential.

She stated that volunteers will leave fish in the water for the time being because they can still swim to unaffected areas of the basin.

Ms. Ferenc asked anybody who observe crayfish out of the water to leave them alone and notify authorities.

She advised, “Do not pick them up or interact with them, as they are already distressed.”

I understand that it’s distressing to see them out of the water, but OzFish has Fish Emergency Recovery Teams working to save as many crayfish as possible.

OzFish Unlimited was unable to corroborate allegations of fish kills in the mid-Murray, but issued a warning that they were certainly imminent.

If you have witnessed a fish kill in the Murray, please contact the NSW Department of Primary Industries at 1800 043 536 or the Environment Protection Authority of Victoria at 1300 372 372 to report the incident.