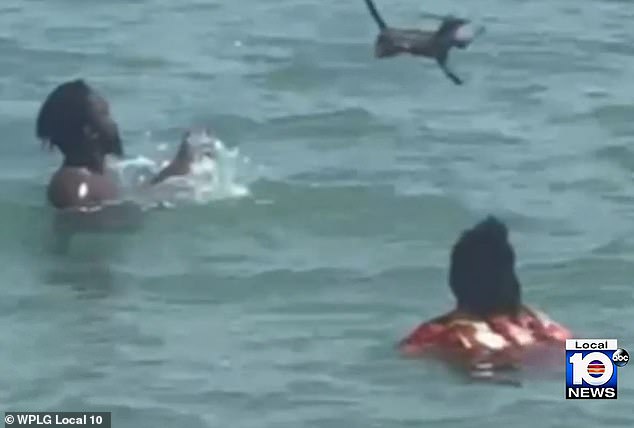 A couple is in trouble after being caught on camera tormenting a little cat while swimming at a nearby beach by tossing the hapless animal’s feet into the water shoulder-deep.

The accused, Jamarria Wayne, 22, and John Laguerre, 27, made jokes and demanded $1,000 from the Good Samaritans to stop when they were confronted by furious spectators.

Both criminals were detained by police on Sunny Isles Beach in Miami late last month after they had resisted being taken into custody and had even come dangerously close to biting one of the policemen.

One beachgoer managed to capture the whole fight on tape, and the kitten, who was shown clinging to life after the trauma, survived.

Additionally, after being apprehended, the couple did not come back to get their pet, which prompted one of the feline’s protectors to step forward and adopt the cat.

Since then, the lady has been able to find a new home for the kitten. According to her, throughout the pandemonium, her only concern was ensuring that the little pet survived the mayhem unharmed.

They were attempting to teach the cat to swim, but she was so terrified that she had already passed out. She had a partial life.

Martin attempted to approach the young pair, who were seen wading in the Florida waters as Laguerre held the frail cat in one hand, but they ignored him and reportedly started to bully the lady.

The subsequent conflict, according to Martin, “started with the man being very violent towards me.”

She described Laguerre’s reaction to being chastised during the incident, which took place on September 24, as “he begins stepping up.”

Hey, see, this is my cat, he says. You have no business in this. She responded, “I can do anything I want.

The 5-foot-9, 190-pound offender apparently started playing with Martin at that point and even tried to extort her by saying, “If you don’t want me to toss the cat, pay me $1,000 right now.”

Martin was incensed by the apparent sarcasm and immediately called beach security, then later local police.

The mistreatment continued throughout, drawing the attention of several other beachgoers who were similarly appalled by the couple’s treatment of the animal.

Martin said, “They were tossing her into the sea like this.” They were attempting to teach the cat to swim, but she was so terrified that she had already passed out. She had a partial life.

One beachgoer recorded video of the event, which seemed to support Marin’s description of what happened by showing Laguerre repeatedly throwing the animal several feet in the air as he and his female friend soaked in the critter’s suffering.

To the shock of other beachgoers, the duo is seen in the heartbreaking video throwing the animal about like a frisbee.

The kitten, who seemed to be no more than a few months old, stayed still throughout the maltreatment, seeming dazed from the repeated shock of being thrown into the rushing waves.

Martin and others objected repeatedly, but the pair persisted in throwing the animal until police came, undeterred by their pet’s evident distress.

Martin said that they had just intended to lift her up and toss her once more. There were a lot of people on the beach. They attempted to glance about and see what was happening. Everybody was stunned.