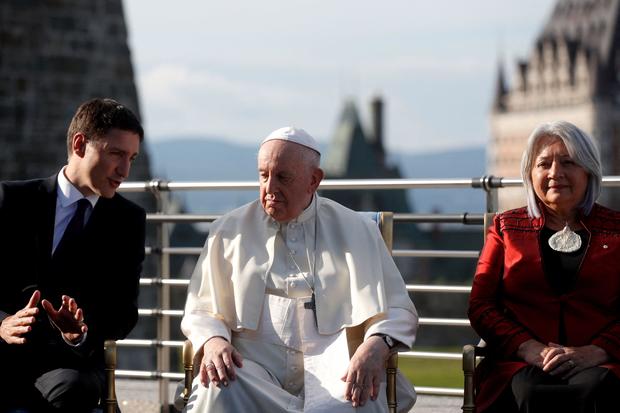 The Canadian government made it clear on Wednesday that Pope Francis’ apology to Indigenous peoples for wrongdoing in the nation’s residential schools sponsored by the church was insufficient, indicating that the process of resolving the contentious past is still very much ongoing.

During the second leg of Francis’ week-long visit to Canada, the official government response came as Francis landed in Quebec City for meetings with Prime Minister Justin Trudeau and Governor General Mary Simon at her Quebec residence, the hilltop Citadelle citadel.

The government’s concerns mirror those of some survivors and focus on Francis’ failure to mention the sexual abuse of Indigenous children that occurred in schools, as well as his initial hesitation to hold the Catholic Church accountable.

Francis has declared that he is on a “penitential pilgrimage” to atone for the church’s involvement in the residential school system, which saw generations of Indigenous children forcibly removed from their homes and compelled to attend boarding schools run by the church and supported by the government in an effort to assimilate them into Christian Canadian society. According to the Canadian government, physical and sexual abuse was commonplace at the schools, and children were frequently punished for using their native languages.

Francis stated that as part of an assimilation and enfranchisement programme, the educational system was “promoted by the governmental authorities at the time.” To the criticism, he responded by saying that “local Catholic institutions had a part” in putting that policy into effect.

Indigenous peoples have long demanded that the pope take responsibility for institutionalising the Catholic Church’s support of the assimilation policy and the papacy’s justification of European colonial expansion in the 15th century as a means of advancing Christianity, as well as for the abuses committed by specific Catholic priests and religious orders.

From the 19th century until the 1970s, more than 150,000 Native children in Canada were removed from their homes and enrolled in schools in an effort to shield them from the influence of their family and culture.

Trudeau believed that the Catholic Church as a whole carried responsibility and needed to do more to make amends. Trudeau is a devout Catholic whose father, Pierre Trudeau, served as prime minister while the last residential schools were in operation.

Speaking before Francis, he said that although Canada’s Truth and Reconciliation Commission had called for a papal apology to be made on Canadian soil in 2015, Francis’ visit “would not have been possible without the courage and perseverance” of First Nations, Inuit, and Metis survivors who travelled to the Vatican last spring to press their case for an apology.