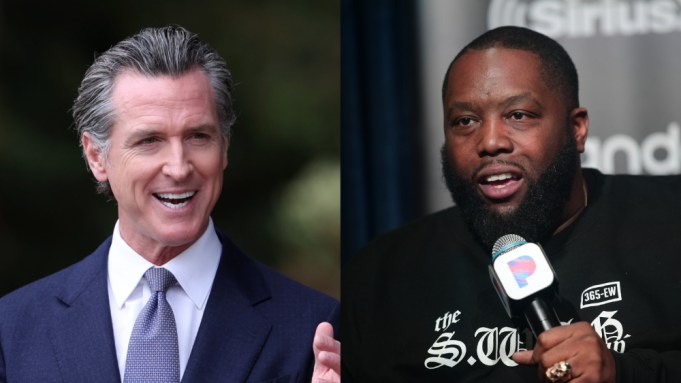 Advocates claim that a bill approved by Governor Gavin Newsom on Friday will assist safeguard artistic freedom in hip-hop.

The Decriminalizing Artistic Expression Act, commonly known as AB 2799, attempts to reduce the use of rap lyrics against musicians in California courts, as seen by legal procedures against Drakeo the Ruler, Young Thug, and Gunna.

When Newsom signed the bill, artists including Killer Mike, Meek Mill, Too $hort, Ty Dolla $ign, YG, E-40, and Tyga were practically there. The signing was also attended by representatives from the Recording Academy, the Black Music Action Coalition, and Songwriters of North America.

Hip-hop is renowned for its literal and narrative lyrics, as well as its hyperbolic and exaggerated lyrics. Some legal professionals and advocates view the use of lyrics as evidence as a breach of the First Amendment and a means of enforcing discriminatory stereotypes.

According to the American Civil Liberties Union, practically all cases in which lyrics are used as evidence involve African-American or Latino defendants. In a 2020 appeal filed on behalf of Knoxville rapper Christopher Bassett, the organization argued that rap lyrics are frequently taken out of context and, in Bassett’s instance, are irrelevant.

“Drill-style rap enjoys the same constitutional protection as other forms of artistic expression, despite the genre’s traditions. In this case, the trial court viewed rap music as intrinsically more criminal than other artistic and musical forms “The text of the amicus brief filed by the ACLU.

Prior to his untimely demise, Drakeo the Ruler was charged with first-degree murder, attempted murder, and conspiracy to commit murder. Prosecutors used lyrics from his song “Flex Freestyle” as proof that he murdered a 24-year-old man in court. The Los Angeles rapper was ultimately cleared of the allegations.

Dina LaPolt, industry attorney and co-founder of Songwriters of North America, was quoted in Variety as saying, “For too long, prosecutors in California have utilized rap lyrics as a handy way to infuse racial bias and confusion into the criminal justice system.” The SONA has been an advocate for the bill.

“This Act establishes essential safeguards that will enable courts to hold prosecutors accountable and prohibit them from criminalizing artistic expression by Black and Brown individuals. Thank you for setting the standard, Governor Newsom. As this is a nationwide issue, we hope Congress would enact comparable laws “She continued.

Since the 1990s, Erik Nielson and Andrea Dennis, authors of the book “Rap on Trial: Race, Lyrics, and Guilt in America,” estimate that rap lyrics have been used as criminal evidence in at least 500 cases in the United States.

The California proposal is comparable to the Restoring Artistic Protection Act, which was proposed in the House last summer by Georgia Representative Hank Johnson and New York Representative Jamaal Bowman.

Johnson stated to the Los Angeles Times “People make the association between rappers and gang members, drug dealers, and dangerous individuals. These are the kind of topics discussed by rappers in their raps. Simply stating that a person is a rapper generates negative perceptions and prejudices. Therefore, when you really introduce the rapper’s lyrics and utilize them as proof against them, the case is closed.”

The RAP Act bill has not yet been brought to the floor of the House for a vote.

Newsom, the Songwriters of North America, and the Black Music Action Coalition did not react promptly to an inquiry from Insider.

»California no longer allows rap lyrics as evidence against rappers«