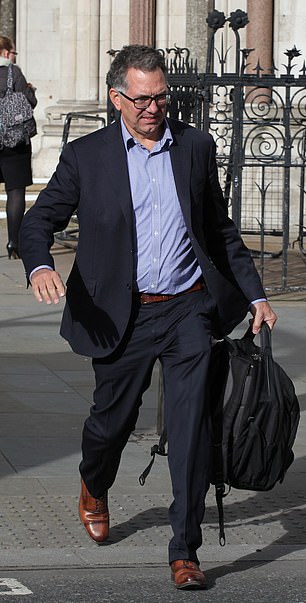 A businessman who gave nearly £200,000 to a Tinder date is fighting in court almost five years later to get his money back.

Marcel Kooter, 61, a London-based oil industry expert, said he was ‘blinded by infatuation’ when he agreed to transfer the money to 41-year-old Manuela Radeva, Bulgarian, after meeting her online in February 2017.

Mr. Kooter had a frenetic nine-month romance with Ms. Radeva, who pretended to be an investment manager and moved into his Woolwich apartment shortly after their first meeting.

He eventually realized, however, that she was neither a professional banker nor a single woman, having married another guy a few weeks prior.

Mr. Kooter sued her in December 2017 for the return of his money.

He won his lawsuit, but continues to fight for the £206,000 she owes him after filing for bankruptcy in the United Kingdom within a month after the February 2019 verdict.

However, he won his five-year battle last week when a judge in London invalidated Ms. Radeva’s bankruptcy, allowing him to pursue her for his money.

Judge Raquel Agnello KC stated that Ms. Radeva’s successful bankruptcy petition was based on a series of fraudulent assertions and a forgery of a university degree intended to create the ‘illusion’ that she was domiciled in the United Kingdom and hence qualified for bankruptcy here.

Despite their brief relationship, the High Court heard that the couple had a “lavish lifestyle” together, including skiing vacations and stays at costly hotels.

The court heard that Mr. Kooter spent thousands on gifts for his new lover, including fancy luggage and a Chanel handbag and clutch, as well as covering their “hotel and bar bills.”

After their breakup, he requested the return of £182,000 that he said he given her in the notion that she was a financial expert who would invest it for him.

Michael Collard, who represented Ms. Radeva, argued that the payments were part of their extravagant “domestic costs as a couple” and that Ms. Radeva should not be required to compensate him.

He stated, “This was a man with a very high income in a clearly committed relationship.” They were cohabitating. This connection had numerous kisses. They did not share a professional relationship.

Ms. Radeva testified before the judge that she had never pretended to be an investment manager and that trading was purely her “evening pleasure.”

Judge John Cavanagh ruled in 2019 that a screenshot of her Tinder profile from 2017 revealed that she was employed by Citibank.

However, just over three weeks later, Ms. Radeva filed for bankruptcy, naming Mr. Kooter as her sole significant creditor, and the order was issued in July of that year.

She said she resided in Epsom, Surrey, was educated and employed in the United Kingdom, and maintained her social life and conducted her business there.

However, the judge stated that serious doubt had been thrown on her assertions, notably that she had earned a master’s degree from Birkbeck UCL, which does not exist.

“It is impossible to think that someone who attended any of these prestigious institutions of higher education and received an MBA there would commit such an error,” the court stated.

She continued by explaining that a claimed certificate proving her course attendance misspelled the name of the real university, Birkbeck, and featured other typographical problems.

She also claimed to have held marketing positions in the United Kingdom, including at Picturehouse Cinemas, but she did not provide any specifics or proof that she was paid or paid taxes.

She said, “Mr. Kooter argues that Ms. Radeva is simply attempting to establish an illusion of permanent presence in the United Kingdom.”

“After reviewing the facts in front of me, I conclude that Ms. Radeva’s customary home remained in Bulgaria.

“The evidence does not indicate a genuine change of domicile.” The evidence indicates that she attempted to create the appearance of a permanent home in England and Wales.

“Her proof does not address her tight and strong links to Bulgaria.”

“She has given to this court a document that I have determined to be fraudulent.” She relies on her many marketing and other courses, but fails to provide evidence of how she finances her studies or her standard of living in England and Wales.

‘As I have held on the evidence, she did not perform any economic activity in England and Wales at the relevant time.

In light of the fact that Ms. Radeva’s major interest was in Bulgaria at the time she sought a bankruptcy order, I am satisfied that the court lacked the authority to issue such an order.

The bankruptcy of Ms. Radeva has finally been annulled.

The matter will return to court at a later date to determine the repercussions of the judge’s decision.

»Businessman who handed Tinder lover £200,000 begins new court battle to get cash back«