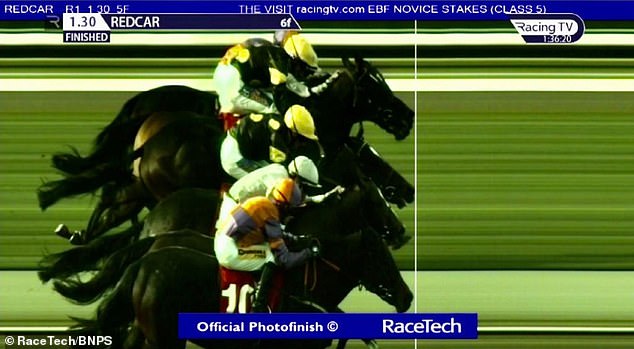 A veteran racetrack photographer was astounded when he captured “one of the tightest finishes in British racing history.”

Tony Knapton, a 52-year-old racing photographer with 28 years of experience, remarked, “I’ve never seen anything like it” as three horses neared the crossing simultaneously.

This was one of the closest finishes in the history of the short three-quarter-mile race held at Redcar, North Yorkshire.

As the twelve jockeys sped down the racetrack Project Black, Oneforsue and Hodson Point began to gain ground.

Mr. Knapton, who has worked at the racetrack for twelve years, stated, “I was astounded by how close the race was as I stood at the finish line.

“I was confident that the jockey in the middle had won, but I couldn’t distinguish between the riders in my shots.”

‘I chatted with the third-place finisher, and he couldn’t believe he had finished third; he must have been centimetres away from winning the race.

I have covered events for the past 28 years, and a photo finish with three riders is quite rare.

‘Sometimes it’s a neck-and-neck contest between two, but I can typically tell who won right away.’

Eventually, technology was able to determine that Harrison Shaw, wearing a black and yellow speckled jersey, had won the race for Project Black.