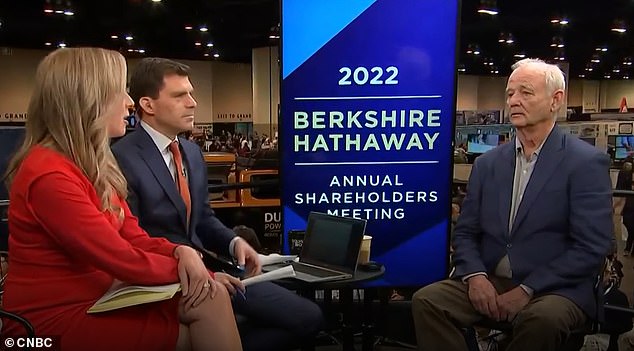 It has been reported that Bill Murray paid a female staff member $100,000 after kissing and straddling her on set, which caused the movie to be canceled.

The unnamed lady is said to have engaged with the 72-year-old comic when he was working on Being Mortal early this year.

It is stated that she was immobile due to his weight, and Murray reportedly paid the lady $100,000 after that.

There is no word on whether the $20 million film, which is the controversial comedian Aziz Ansari’s directorial debut, will ever be finished after the April incident that forced Disney to halt filming.

According to Puck, Murray was extremely friendly and even “sexual” with one female production crew member, whose identity has been withheld.

The actor alleges that at one point, he and the lady were close to a bed and that he thought she had been flirting with him.

He reportedly started kissing her body and straddling her at that point, immobilizing her with his weight on top of her.

Murray allegedly leaned in to kiss the lady on the lips despite the fact that both of them were wearing face masks at the time. The claimed incident happened in front of observers.

According to Puck, Murray instantly claimed that his actions were intended to be amusing, but the lady mistook them for sexual advances and was appalled by what had happened.

The lady allegedly reported right away, and a second employee who observed what occurred allegedly corroborated her claims.

Although no specific reasons were provided in a business statement sent to the employees, Searchlight stopped production on the movie.

Aziz Ansari would be making his directing debut.

According to a source who spoke to Puck, Murray felt awful about what had transpired, especially because other crew members had lost their jobs as a consequence of the production’s suspension.

The two parties ultimately came to an arrangement, and according to Puck, Murray agreed to pay the lady slightly over $100,000 in return for her total anonymity and signing a non-disclosure agreement.

Additionally, it is claimed that the lady relinquished any legal claims she could have had against the producers, including Searchlight and Disney.

When questioned about the incident on CNBC in April, Murray withheld the specifics.

I did something that, in my opinion, was humorous, but it wasn’t received that way. We are now speaking and attempting to find common ground,’ Murray added.

We are both professionals, we appreciate one other’s work, and we like each other, so there is no purpose in continuing to collaborate or to produce the film if we can’t actually get along and trust one another. It’s given me a lot to learn.

The world has changed since I was a little child, he said. Things and times change, after all.

Murray had hoped that the resolution would lead to the film’s production picking back up. However, in the post-MeToo environment, this hasn’t occurred, and it now looks that the movie, which had already been partially filmed and included Seth Rogan, will be shelved.

In her recent book Dying Of Politeness, Geena Davis described her own awful experiences working with Bill Murray on their 1990 crime comedy Quick Change.

The 66-year-old acting legend described to The Times on Friday how Murray reportedly made her feel uneasy during her audition for the movie, in which he also co-starred and co-directed with Howard Franklin.

She claims that Murray yelled at her on set in front of “hundreds” of people because she was supposedly late, even though she insists that the wardrobe department was the only reason for the delay.

The Times reports that “[Davis] meets [Murray] in a hotel room, where Murray welcomes her with something called The Thumper, a massage gadget he insists on using on her in spite of her adamant refusal.”

After the unsettling meeting, the Royal Tenenbaums actor apparently lost his cool while shooting Quick Change, leading to an even more embarrassing episode.

Murray confronts Davis later, while they are filming on location, and yells at her for being late (she was waiting for her wardrobe), continuing to yell at her as she rushes onto the set and even as she gets there, in front of hundreds of cast members, crew members, and curious bystanders, the report said.

Davis said about her audition with Murray, “That was horrible,” as she considered how she may have handled the situation better.

“How he conducted himself during the first encounter… I should have either left the situation or made a strong defense of myself, in which case I wouldn’t have been offered the role.

If I had known how to respond or what to do at the audition, I may have been able to prevent such treatment. But, you know, I simply didn’t because I was being so non-confrontational, she added.

However, when it was pointed out to her that her statements can be seen as victim blaming, she agreed.

‘Ha. accepted as true. Even though there is no need in regretting things, I found myself doing just that. It wasn’t my fault, and absolutely, precisely,” she said.

Murray hasn’t yet addressed Davis’ comments in public, either in the interview or her book.

Earlier last year, when they were co-stars in the action movie Charlie’s Angels, the actress Lucy Liu also spoke about the verbal abuse Murray reportedly hurled at her.

She said on the Asian Enough podcast, “Bill begins to kind of hurl insults while we’re shooting the scene, and I won’t go into the details, but it continued going on and on.”

The former Saturday Night Live cast member’s slur was described by the film and television actress as “inappropriate” and “inexcusable,” and she added that she “was not going to simply sit there and take it.”

Consequently, I did advocate for myself, and I don’t regret it. There is no need to belittle or condescend to others, regardless of your status in society or where you are from. And I wouldn’t back down, and I shouldn’t have either,’ she adamantly asserted.

The director of Charlie’s Angel, Joseph McGinty Nichol, also allegedly received a’square on the head’ headbutt from the celebrity.

He admitted to the Guardian in 2009 that “an inch later and my nose would have been demolished.”

Murray disputed the assertion and told the Times, “That’s bulls**t!” That is just nonsense! I’m not sure why he made up that tale. His imagination is highly active.

Famously, Chevy Chase and the Ghostbusters actor got into a fight in 1978 while filming SNL.

According to reports, the argument started when the two began to call one other names. Importantly, Murray instructed Chase to go have a sexual encounter with his ex-wife Jacqueline Carlin.

According to the book Live from New York: An Uncensored History of Saturday Night Live, Chase said that Murray’s face seemed to be “something Neil Armstrong landed on.”

In another incident, Murray reportedly had a “meltdown” on the set of What About Bob and flung an ashtray at Richard Dreyfuss’ head.

Murray reportedly threatened to “throw” a female producer across a parking lot and “tear off her spectacles” during a rage after being refused an additional day off on the What About Bob set in 1991, according to Dreyfuss’ son Ben, 35, who exposed the incident on Twitter earlier this year.

Ben said that in order to keep Murray and Dreyfuss, 74, apart after production started, bodyguards had to be stationed on the set.

He said in a tweet that “everyone walked off the set and took a flight back to LA,” adding that “it only resumed when Disney hired some security to physically separate my dad and Bill Murray between takes.”

Ben also said that the incident occurred when he was “like five,” yet he still referred to his time on the set as some of his “fondest and earliest recollections” and hailed the film as being “excellent.”

Among other rumors, it seems that the ashtray incident has been circulating around Hollywood for decades. Dreyfuss even addressed it in 2009.

He sat down next to me, nose to nose, and yelled, “Everyone hates you!” at the top of his lungs. At the moment, the actor responded, “You are tolerated.”

He leaned back and snatched a contemporary glass-blown ashtray before anybody could react.

He was [only a few feet away] and flung it at my face. Additionally, it weighed roughly 0.7 pounds. He also missed me. He attempted to punch me. I rose and walked away.

Murray’s reaction with “petite” producer Laura Ziskin, who refused Murray the day off, was the subject of Dreyfuss’ complaints. In 2013, she told the Los Angeles Times that Bill had threatened to toss her across the parking lot before breaking her sunglasses and doing the same.

Ziskin passed away from breast cancer in the intervening years, and the two never again collaborated.

On What Happens Live with Andy Cohen in 2021, Laraine Newman described it as a “very sad and terrible and horrific” incident that finally went violent in front of numerous costars.

Murray allegedly engaged in sexual activity with Groundhog Day director Harold Ramis. During the argument, the director is accused of throwing the actor against the wall. Ramis’ daughter said that Murray and the filmmaker didn’t speak for 20 years after the altercation and that Ramis was “heartbroken.”

Murray allegedly offended Anjelica Huston by failing to invite her to a dinner party while shooting The Life Aquatic With Steve Zissou.

He asked the whole group to go out to dinner the first week she was shooting in Italy, but he left me out. She revealed this in 2019.

Ansari was also accused of sexual misconduct in 2019 due to an event in 2018.

He allegedly disregarded verbal and nonverbal signs from a lady that she didn’t want to get personal with him at the conclusion of their date.

I’m sure some of you are wondering how I feel about the whole scenario, the man continued. And since I experienced so many different emotions over the last year or so, it’s difficult for me to respond.

The fact that this individual thought this way eventually made me feel bad. And I just hope it was a step in the right direction after a year or so.

It helped me move things forward and gave me a lot to think about, he said. I think I’ve improved as a person.

And I always recall a discussion I had with a guy in which he said, “You know what, man? I was thinking about every date I’ve ever been on after the entire incident.

And I was like, “Wow. That’s pretty amazing, I must say. It’s improved other people’s thoughtfulness, not just mine, and that’s good.

And that’s how I feel about it, he said, “and I realize this isn’t the funniest way to start a comedy performance.

But before we spend this evening together, I want you to understand how I feel about the whole situation.