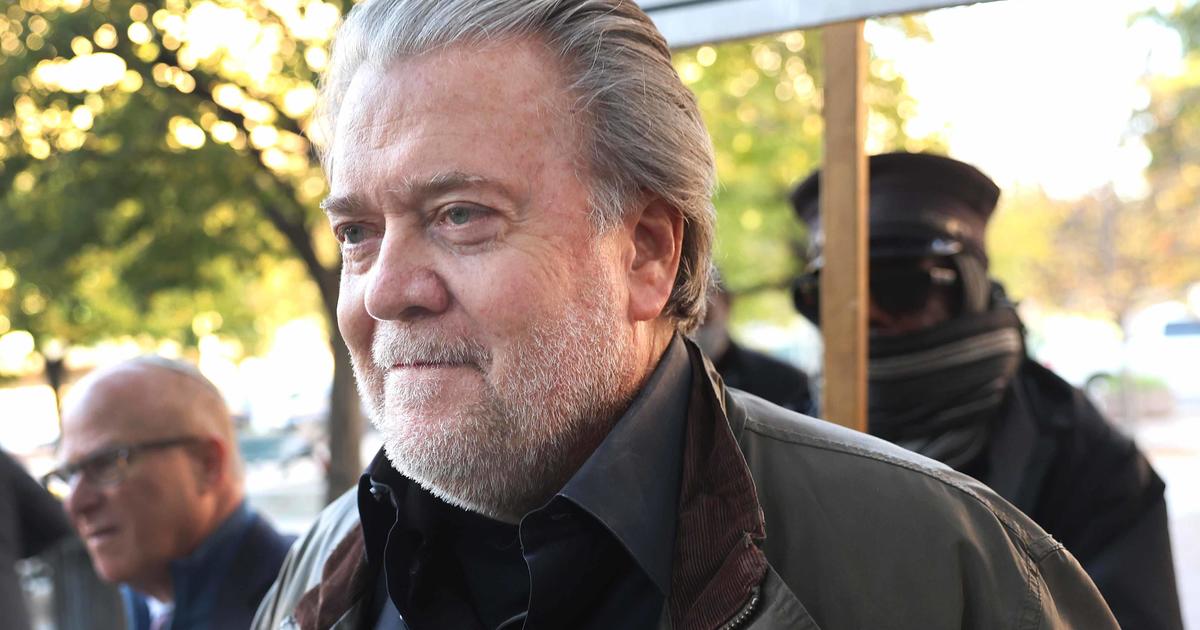 Steve Bannon, former chief White House strategist and campaign CEO for former President Donald Trump, was sentenced to four months in prison on Friday after a jury convicted him on two counts of criminal contempt of Congress for defying a subpoena from the House select committee investigating the attack on the U.S. Capitol on January 6, 2021. In addition, he must pay $6,500 in fines.

Bannon was found guilty in July, and according to his legal team, he plans to appeal his verdict.

Prosecutors requested that Judge Carl Nichols sentence Bannon to six months in jail, at the upper end of the sentencing guidelines for this case, and impose a $200,000 fine for “his prolonged, bad-faith contempt of Congress,” as argued by the prosecution. Bannon’s legal team requested a sentence of probation and a deferral of any potential prison time pending his appeal.

Nichols decided that Bannon had been guilty of crimes that carry a mandatory minimum sentence of one month in jail, stating that the “law is clear” on the topic and that Bannon had shown no contrition for his acts.

The judge agreed with Bannon’s legal team that he should be released from prison and his sentence postponed pending the outcome of his appeal.

After the sentencing, Bannon addressed the media “We will have a rigorous appeals process – I have a fantastic legal team. There will be numerous points of appeal.”

Bannon, who was a private citizen at the time of the committee’s formation on January 6, 2017, was accused after refusing the panel’s demand that he sit for a deposition with investigators and hand over relevant documents to the congressional investigation.

The committee initially requested material from Bannon in 17 key areas, ranging from his conversations with Trump to his knowledge of coordination with right-wing extremist groups during the attack on the Capitol.

Following Bannon’s not-guilty plea, a contentious legal battle ensued between the defense and prosecutors over which evidence was admissible at trial, Bannon’s attempts to postpone the proceedings, and the televised hearings showcasing the House Jan. 6 select committee’s evidence, which referenced Bannon multiple times.

During the trial in July, prosecutors told the jury that Bannon believed he was “above the law” and “thumbing his nose” at congressional demands. Bannon himself did not testify, and neither did his defense team.

The Trump ally argued at the time of his refusal that he was unable to testify due to executive privilege concerns raised by the previous president, adding that his attorney, Robert Costello, urged him not to cooperate with the subpoena due to these concerns. Nichols found that Bannon’s legal team could not offer a defense known as “advice of counsel” to the jury due to precedent from a higher court. This verdict will undoubtedly be the focus of Bannon’s appeal.

Days before the trial began, Bannon told the committee on January 6 that he would be willing to testify — publicly — after Costello stated that Trump had changed his position on these executive privilege claims.

In their pre-sentencing memo, prosecutors alleged that Bannon used his apparent change of heart to exert pressure on prosecutors to drop the case on the eve of trial, accusing him of attempting to persuade congressional investigators who sought his testimony to convince the Justice Department to drop the charges if he cooperated.

Prosecutors said earlier this week, “The Defendant intended to use the material he unlawfully withheld from the Committee to orchestrate dismissal of his criminal case.” “The record in this matter is replete with evidence that, with regard to the Committee’s subpoena, the Defendant continuously acted in bad faith and with the intent to impede the Committee’s work.”

The government stated in court on Friday that Bannon “never moved a finger to locate a responsive document.”

Prosecutor J.P. Cooney stated, “The defendant has attempted to make the case about nothing else than politics and retribution.” “He has behaved as though he is above the law. He is not the case.”

However, Bannon’s defenders maintained that their client was politically targeted and punished for following his attorney’s advice.

They contended that a prison sentence was illegal since Bannon believed he was operating legitimately.

“Any jail sentence should be suspended,” argued attorney David Schoen in court on Friday. “It would not be proper.”

“It is especially inappropriate to bring this case as a criminal matter,” Schoen argued, adding, “Mr. Bannon should not apologize.”

Schoen asserted that Bannon was acting “on principle” when he ignored the subpoena, and he stated that the legal action against Bannon was political.

Bannon, who sat mainly expressionless in the courtroom, informed Nichols that his attorneys would speak on his behalf prior to sentencing.

Nichols explained his sentence by stating that the House Committee on January 6, which Bannon disobeyed, has “every motive” to investigate the events of that day and seek to prevent similar occurrences.

The judge stated that some of the information the committee requested from Bannon had “no plausible claim of executive privilege,” although the judge was less certain about the executive privilege surrounding other items. Nichols agreed that Bannon’s legal team did not entirely ignore the committee and talked with the staff over its concerns regarding privilege.

In addition, he stated that the committee’s choice not to pursue a civil case to compel Bannon’s testimony prior to finding him in contempt “cut” in Bannon’s favor.

Nichols ordered Bannon to turn himself in by November 15, barring an appeal.