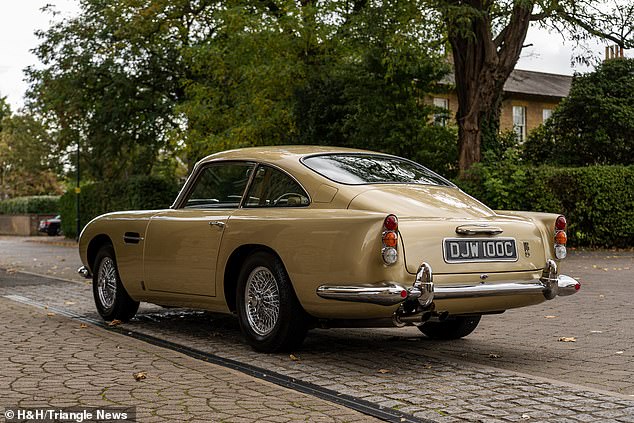 An legendary Aston Martin DB5 with a selling estimate anywhere between £450,000 and £550,000 is now up for auction. It is evocative of the design from James Bond’s classic movie “Goldfinger.”

Contrary to agent 007’s classic automobile, this one is painted gold since it was considered that the silver birch color in the movie seemed to be “unpainted.”

The first batch of DB5 models made by British toymaker Corgi were released in 1964, and this particular model will be auctioned off on October 19.

‘This Autumn Gold Beauty has been in single family ownership since 1982 and is only one of a paltry 898 DB5 fixed-heads ever manufactured,’ a spokeswoman for H&H auctioneers, the company selling the vehicle, stated.

Without a question, of all the “James Bond” Aston Martins, this one is the most well-known. On October 19, it goes up for sale via H&H Classics at the Imperial War Museum in Duxford.

It features an S5/325 ZF 5-Speed manual gearbox that is originally installed, as well as matching chassis and engine numbers.

“A well-known brand expert has rebuilt the engine to 4.2 liter unleaded standard.”

The model features a beige leather inside and is one of only 41 that were initially done in the Autumn Gold.

Although more of an evolution than a revolution, the DB5 represented a considerable advancement when it first appeared on stage in 1963. It was quicker than its predecessor, to start, the H&H spokeswoman noted.

It is said to have a top speed of over 150 mph and a seven-second acceleration to 60 mph.

The car’s basic specifications were been upgraded, and now had four silencer exhaust, reclining seats, pile carpets, electric windows, and tinted glass in addition to an alternator in lieu of the dynamo.

A 51-year-old tax disc given to the renowned Aston Martin featured in the James Bond film and sold for more than £25,000 at auction the previous year.

With the premiere of “No Time to Die,” according to auctioneers Bonhams, 007-fever was evidently spreading throughout the saleroom at the Goodwood race track in West Sussex.

The genuine 1970 UK tax disc for the Aston Martin DB5 from the James Bond movie “Goldfinger,” which was utilized by Pinewood Studios, sold for an astounding £25,250.

“This was an outstanding outcome, and we are happy to have achieved yet another auction world record with the sale of the XJ220,” stated Tim Schofield, Head of Department at Bonhams Motor Cars UK, at the time.

Following a two-way bidding battle in the Bonhams saleroom at the Goodwood Motor Circuit, it sold for more than ten times its pre-sale estimate.