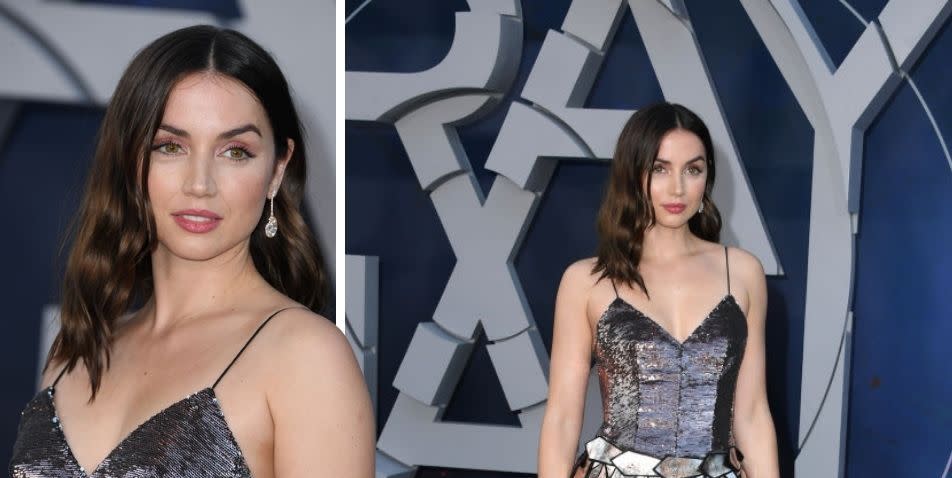 The actress wore a similarly daring velvet Louis Vuitton gown to the 2021 James Bond “No Time To Die” premiere, where she walked the red carpet.

Ana de Armas attends the global premiere of “No Time To Die” at Royal Albert Hall in London, England on September 28, 2021.

According to Grazia, de Armas embodied the adventurous character of a classic Bond girl by wearing a velvet Louis Vuitton gown while promoting “No Time To Die” in London.

The dress had a plunging neckline and a thigh-high slit, which was reminiscent of an outfit worn by her film character Paloma. According to Grazia, the shoulder straps were adorned with diamonds from Chopard.

Always one to leave fashion observers guessing, de Armas embraced androgynous style in 2019 by wearing a tuxedo with a ruffled undershirt.

Ana de Armas attends the European Premiere of “Knives Out” in London, England.

In 2019, when she wore a black tuxedo with a black bow tie on the red carpet, de Armas shown she had the ability to play the lead part. This was before to her debut as a Bond girl in a James Bond movie.

Metro reports that de Armas was a last-minute addition to the “Knives Out” red carpet event, but she made her presence known by wearing an androgynous outfit. In addition to a pink flowery boutonnière, a ruffled undershirt, and heels, the ensemble featured a few additional elements.

Ana de Armas attends the premiere of “Knives Out” on November 14, 2019 at Regency Village Theatre in Westwood, California.

At the 2019 premiere of “Knives Out” in California, de Armas demonstrated her fashion adaptability, despite her penchant for masculine trends.

The Cuban actor was a vision in a Chanel wedding-style organza dress with floral embroidery, sheer sleeves, and feather embellishment.

She does not reserve her greatest appearances for red carpets alone. In 2021, de Armas appeared on Jimmy Fallon’s “The Tonight Show” sporting a beautiful latex maxi dress.

On the red carpet, celebrities always look their best. However, on a 2021 appearance on Jimmy Fallon’s talk show, de Armas demonstrated that she can wear similarly bold ensembles off the red carpet.

Just Jared claimed that she donned a latex leather-like maroon maxi dress by Alex Perry for the event, during which she described how she was expelled from acting school for pursuing her first film. The dress featured a skin-tight bustier with a deep V-shaped neckline.

As a homage to the title of Netflix’s “The Gray Man,” de Armas stole the spotlight at the Hollywood premiere in an all-shimmering gray ensemble.

Ana de Armas attends the Hollywood, California international premiere of “The Gray Man” on Netflix at the TCL Chinese Theatre.

De Armas’ interpretation of an all-gray ensemble, which to the ordinary person probably comprises of sweatpants and sweatshirts, is much more consistent with her dazzling persona.

According to Marie Claire, the ensemble included a metallic Louis Vuitton outfit with a shimmering bodysuit and a flower-embroidered scaled skirt, as well as a pair of silver heels.

With the royal-blue suit she wore to a “The Gray Man” event in Germany, de Armas once again proved that she is not hesitant to put her own spin on traditionally masculine attire.

Ana de Armas attends a special showing of “The Gray Man” on Netflix at Berlin’s Zoopalast on July 18, 2022.

WWD reports that de Armas wore a three-piece tailored Louis Vuitton suit with a matching waistcoat, putting her own touch on traditional masculinity.

In lieu of an undershirt, she went for silver sandals with straps, a sleek ponytail, and cherry-red lipstick.

After her visit in Germany, de Armas was sighted in England sporting an outfit inspired by punk rock school uniforms.

While promoting “The Gray Man” in London, the actress definitively demonstrated how to add a punk-rock edge to the traditional school uniform.

According to Grazia, de Armas wore a Louis Vuitton combination consisting of a navy pleated knee-length skirt and a matching monogrammed blazer over a white blouse. She complemented her ensemble with a black tie and black boots with heels.