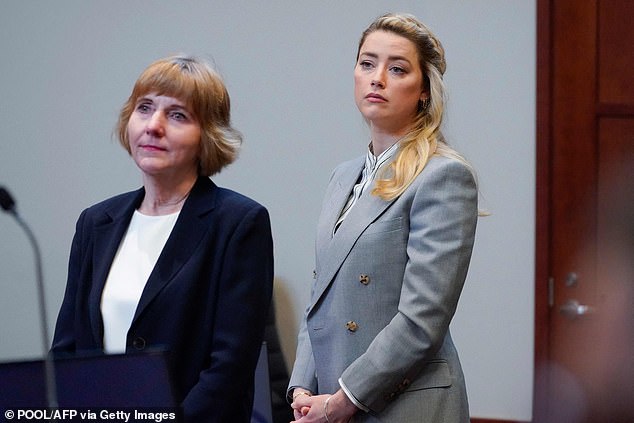 Amber Heard has switched attorneys yet again in an effort to get two insurance companies to foot the bill for her libel settlement with her ex-husband Johnny Depp.

At the conclusion of the explosive trial in June, Heard, 36, was ordered to pay her ex-husband more than $10 million in damages after a jury determined that she had defamed Depp in a newspaper opinion piece written in 2018.

She is currently being represented in her appeal of that judgment by David L. Axelrod and Jay Ward Brown.

According to Puck News, the actress recently added Kirk Pasich to her legal team in an effort to convince many insurance providers to pay her potentially $15 million in legal expenses.

Puck asserts that before the Virginia trial even started, Heard’s expenses increased by over $8 million. It appears that Heard’s team wants homeowner’s insurance to pay for those expenses.

Heard had received a general liability insurance policy from New York Marine for $1 million, while her homeowners policy with Travelers only covered “libel” to the tune of about $500,000.

The main contention in the lawsuit was that New York Marine thought the matter was “pretty plain forward,” while Travelers thought Heard had the right to choose her own attorneys. The judge supported New York Marine’s request to hire less expensive local attorneys.

Travelers argued that Timothy McEvoy and Sean Patrick Roche, who were chosen to represent New York Marine, ‘piggybacked’ on the work of Heard attorneys Roberta Kaplan and Elaine Charlson Bredehoft.

On the other hand, New York Marine said that Kaplan and Bredehoft had barred their lawyers from representing them. Due to the fact that their attorneys were excluded from many court hearings, they now want the return of the $621,693 they contributed to Heard’s defense fund. In order to avoid paying into the $10.35 million libel judgment that the Aquaman actress is expected to pay Depp, the insurers are presently suing Heard. They are doing this in accordance with a California statute that forbids insurance from paying for “willful conduct.” In an effort to handle this problem on Heard’s behalf, Pasich is acting as her representative.

If the verdict stands after her appeal, Double Jeopardy for Heard may hold her liable for the whole amount since Travelers would want to avoid paying it if Depp could show she made false claims.

Depp, 59, received $10 to $15 million in compensatory damages and $5 million in punitive penalties at the conclusion of the defamation trial.

Later, the court set the maximum allowable damages for the state at $350,000, leaving Depp with a total recovery of $8.35 million.

Heard’s three countersuit allegations about comments made by Depp’s attorney that implied the actress and her companions had wrecked their flat before contacting the police were successful in one of her three cases.

Out of the $100 million that the actress requested in compensatory damages, $2 million was granted.

Depp’s team did the same to challenge the couple million the star owes to his ex-wife a day after Heard’s team filed an appeal.

In order to guarantee that “all information is examined by the court” when they return to evaluate Heard’s appeal, the Pirates of the Caribbean actor’s team said they filed an appeal.

Heard’s lawyer requested that the court set aside the verdict and declare a mistrial before Heard filed an appeal. One of the jurors in the case was said to not have been qualified to participate since his summons was meant for his father, who had the same name and residence.

The judge denied the motion, stating that the jury’s decision should remain since there was no “proof of fraud or misconduct” by the juror.