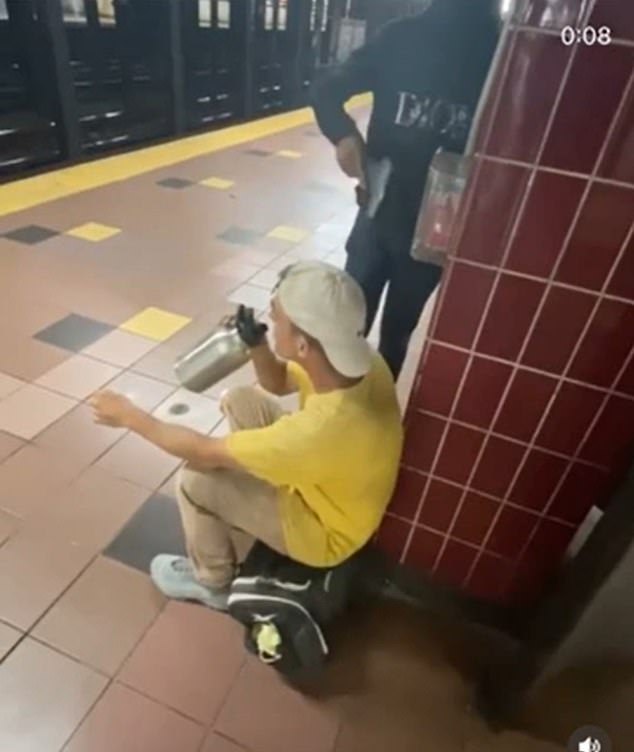 After the “summer of mayhem,” which witnessed over 750 shootings, the city of Philadelphia is still experiencing a crime wave.

A shooter was recently observed pointing a weapon to the head of a subway passenger in Philadelphia.

The distressing video, which quickly became popular online, depicts the man, who is wearing a black hoodie, standing up and aiming his gun towards the platform passenger’s head.

The incident occurred in July, according to statements made to DailyMail.com by SEPTA and Philadelphia police.

No guns were fired during the encounter, according to a SEPTA representative, and no one was hurt, but the horrifying video has shocked locals in the city’s lawless neighborhood.

As a bystander videotaped the encounter, the man appeared to brush off the potential threat while sitting on the ground wearing a white hat and sipping water from a bottle.

No arrests have been made, according to police and transportation spokespeople, and the incident is still being investigated.

According to the Philadelphia Inquirer, it happened during a summer in which, from Memorial Day to Labor Day, 750 shootings were placed in the City of Brotherly Love.

According to Fox29, a 19-year-old was shot 21 times in the body just this past Monday afternoon and killed. In this case, police have not yet made an arrest.

Through September 25, crime in Philadelphia had increased 26.5 percent, as it has in many major American cities.

While killings, rapes, and assaults are down in Philadelphia in 2022, shootings and robberies are on the rise.

In June, following an overnight mass shooting that left three people dead and at least 11 injured in his city, the Democratic mayor of Philadelphia denounced the “horrendous, audacious and terrible act of gun violence” that is afflicting the country.

Jim Kenney demanded that authorities “address the availability and ease of access to firearms” in the US as a manhunt for the perpetrators of Saturday’s heinous attack got under way.

Kenney advocated for greater gun regulations and more effective methods to reduce gun violence, like many of his Democratic counterparts.

We will always face an uphill struggle unless we address the availability and ease of access to firearms.

The mayor declared, “As Mayor, I will continue to work for the safety of our neighborhoods and urge people to support stricter gun control regulations that keep weapons out of the hands of criminals.”

“I’m not just heartbroken; I’m enraged about the rise in gun violence that we’ve witnessed across the country, including here in Philadelphia.” All of our local and federal law enforcement agencies are working together with our administration to minimize violence and build safer neighborhoods.

Philadelphia recently gained notoriety when the city’s renowned convenience shop Wawa was broken into on a Saturday night in the Mayfair district.

The event happened a few weeks after several Wawas were reportedly trashed by dozens of young people in Philadelphia’s Center City, forcing stores to close early.

Violence has dramatically increased in the “City of Brotherly Love,” with overall crime up more than 26% so far this year compared to the same period in 2021.

While there has been a noticeable decline in assaults and rapes this year, there has only been a slight decrease in homicides, from 378 cases last year to 385 so far this year.

The most significant increase has been in robberies, with 4,199 occurrences reported this year, up 40.5 percent from the 3,042 cases reported in 2016.