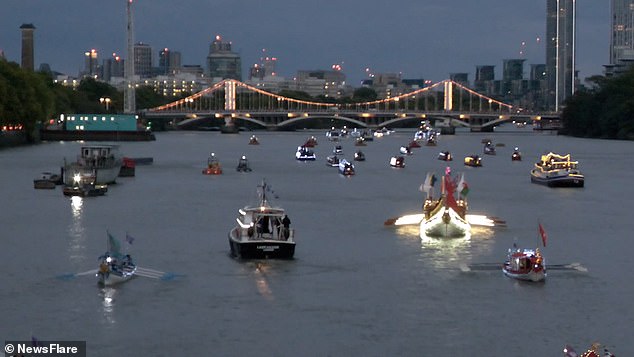 A large crowd came to see a flotilla of 150 boats honour the Queen this evening as they sailed down the Thames.

The glowing memorial to Her Majesty was a component of the “Reflections” exhibit, which was initially intended to commemorate the Queen’s Platinum Jubilee.

The gleaming boats were making an effort to imitate a lovely “nighttime Canaletto scene” — an Italian painter well renowned for his paintings of Venetian canals.

The Royal Barge Gloriana was one of the vessels in the parade, which started at Albert Bridge.

The team was seen rowing across the water with lit oars in the video.

The RNLI will use the £20,000 the flotilla raises to build a new lifeboat station at Waterloo Bridge.

»150 vessels sail down the Thames to honour the Queen«