Skip to content
Go Home «» News «» World News «» 13,000 migrants from Texas have been bused to the Bronx since August 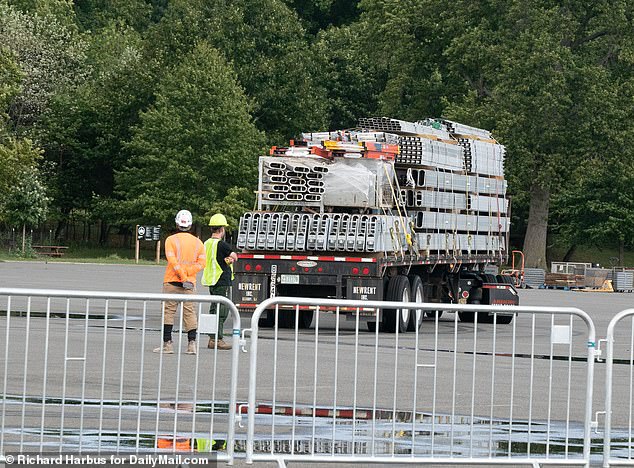 The first of two tent cities, intended to house the 13,000 migrants who have been bussed into the Bronx from Texas since August, was being built by construction workers on Monday.

New York City’s mayor, Eric Adams, declared last week that tents will be built to accommodate the inflow of refugees.

He mentioned two locations: Orchard Beach in the Bronx and an undetermined third.

Hardhatted workers were spotted hauling metal poles that had been transported by trucks, while others prepared the ground by drilling holes for the tents to be built.

Vanessa Gibson cautioned against visiting Orchard Beach since it frequently floods and noted that it is a remote area without access to public transportation.

The entire Orchard Beach parking lot is classified as a “special flood hazard area” by the Federal Emergency Management Agency.

The parking lot is designated by the city as a “Zone 1” hurricane evacuation location, making it particularly susceptible to hazardous flooding during storms.

In a statement, she added, “My team and I are working with the Adams administration to ensure that any site identified for our borough provides wraparound services, even though this is not the optimal location and we have voiced fair concerns.”

These services must be offered in a respectful, humane, high-quality, and secure environment that doesn’t cause more harm than good or place an additional strain on clients and families.

“Under these emergency conditions, we will collaborate with the administration in a thoughtful and calculated way to prevent the Bronx from being overburdened.”

The Adams team promised to offer a shuttle bus so that immigrants can use public transportation. Concerns of floods have not received a response from them.

Despite declining to directly address Gibson’s claim, a spokesperson for the mayor told The New York Daily News that 50 sites from all five boroughs had been considered before the Orchard Beach site was chosen.

Last week, Adams hailed the proposal as a success and evidence that he is aware of his “moral duty” to the tens of thousands of migrants, mostly from Venezuela, who are currently arriving in New York City each week.

He didn’t specify in his press release when the sites will open or, more importantly, how many beds they will have.

In a few weeks, the Orchard Beach location is anticipated to open.

Meanwhile, Texas and Florida continue to send thousands of migrants every week, and Republican leaders believe it’s time for Democrats like Adams to realize the true scope of the situation.

Adams has given Bronx Family Network a $34 million contract in addition to the two migrant camps to build up beds for both migrants and the homeless in the same location.

In a press release on Thursday, Adams said that the new relief facilities will assist solve the issue in New York: “More than 100 years ago, Ellis Island opened its doors to welcome individuals’ yearning to breathe free.

It is more obvious than ever that we are once again faced with a humanitarian crisis brought on by human activity.

According to Adams, they would only stay there for up to 96 hours before being transferred to their preferred “settlement” locations.

He declared, “This is not a regular homeless situation; this is a humanitarian disaster that calls for a different strategy.”

Because of this, asylum seekers will initially contact the Humanitarian Emergency Response and Relief Centers, which will offer them a variety of services and support as families decide what to do next.

“As we continue to seek help from our federal and state partners to continue this effort, this emergency reaction exemplifies what we know must be done during this humanitarian crisis.”

According to Adams, “New York will give the thousands of people who are currently settling in our city the basis to construct a better life, like the generations who came to our city before them.”

»13,000 migrants from Texas have been bused to the Bronx since August«