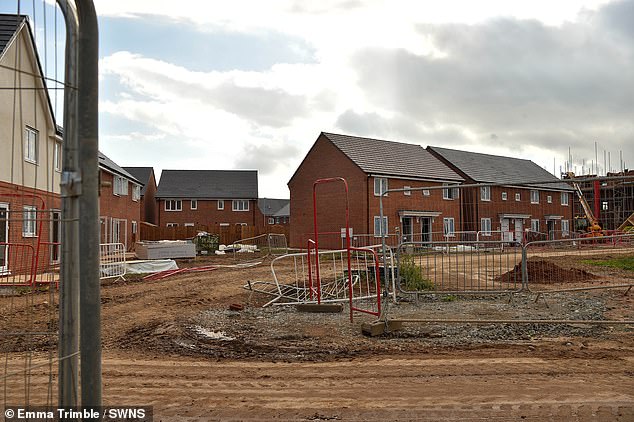 Construction noise as loud as a jet engine on a neighboring newbuild estate, which rattles houses and covers yards in thick dust, is allegedly driving locals “crazy.”

Furious homeowners as a result of the ongoing noise of pile driver machines building the St. John’s housing complex in Worcester, which started four weeks ago.

The ear-splitting boom, according to the locals, has been shaking the foundations of their houses between 7am and 5pm every day since the construction allegedly started without their knowledge one month ago on property they assumed would remain green belt area.

Additionally, they are enraged by the quantity of heavy dust that is overflowing from the building site and coating their gardens, washing, and forcing them to keep their windows closed.

Others claim that the new estate, which is run by Vistry Partnerships and Stonewater developers, is going to destroy their view of what were once fields.

The hammering noises may reportedly be heard up to a mile distant.

One homeowner, who requested anonymity, said: “It’s horrible; since I work nights, I have to sleep in the rear room to try to avoid the noise.”

But even when you’re just settling down for a cup of tea, the roar of the equipment is actually rocking the house.

God alone knows the extent of the harm they are doing on our newly constructed houses, whose foundations require time to settle. It’s making us crazy.

From 7 am to 5 pm, the noise is nonstop. It seems like we are living at an airport, right next to a jet engine. Additionally, you shouldn’t leave your laundry out since it will become coated in dust, which might enter your home if the windows are left open.

We had no prior knowledge of it, and the locals weren’t even consulted; we believed the property to remain green belt until all of a sudden, a ton of diggers appeared.

“Some people have had their garden vistas destroyed, and as they build more than a hundred houses, it’s just going to become worse.”

“If anybody else were making this much noise, something would be done about it,” he said. However, you can immediately tell that nothing will happen since the development was supported by the council and major business.

Homes ranging in size from two to four bedrooms are being built along University Park Drive and Bromyard Road.

Richard Udall, a county and municipal councilor for St. John’s Labour Party, claims that the construction is so noisy that neighbors on the opposite side of the River Severn can hear it.

He said, “I have got several complaints from a very broad region.”

Even though I live about a mile away from the construction site, some locals claim they can hear the noise on the opposite side of the river.

It’s awful; there is a loud, incessant hammering noise that never stops. To make matters worse, we have been told that it will last for another four weeks.

The majority of people had no previous notice or warning, and because certain locals are sensitive to noise, they are unable to avoid it. It’s quite scary and invasive.

The quality of life for many inhabitants is being seriously and negatively impacted.

He continued by saying that he has urged Environmental Health and Planning Enforcement to step in but that “both seem to be helpless to assist.”

“We have no electricity as long as the construction work is done between 7.30am and 6pm,” he stated.

In an effort to lessen the effect of the machine, I hope the construction business would think about securing noise dampeners or echo barriers to it. It is obvious that the work must be done, but it shouldn’t have to cause so much inconvenience and harm to so many people.

The Worcester City Council is aware of the issues, according to a spokeswoman.

After looking into these complaints, they said, “We have not found any evidence of a violation of the requirements linked to the planning permission regarding working hours and best practice that tries to minimise the effect of noise on surrounding people.”

Residents can contact Worcestershire Regulatory Services at 01905 822799 or enquiries@worcsregservices.gov.uk if they are worried that serious noise disturbance is happening outside of these criteria.