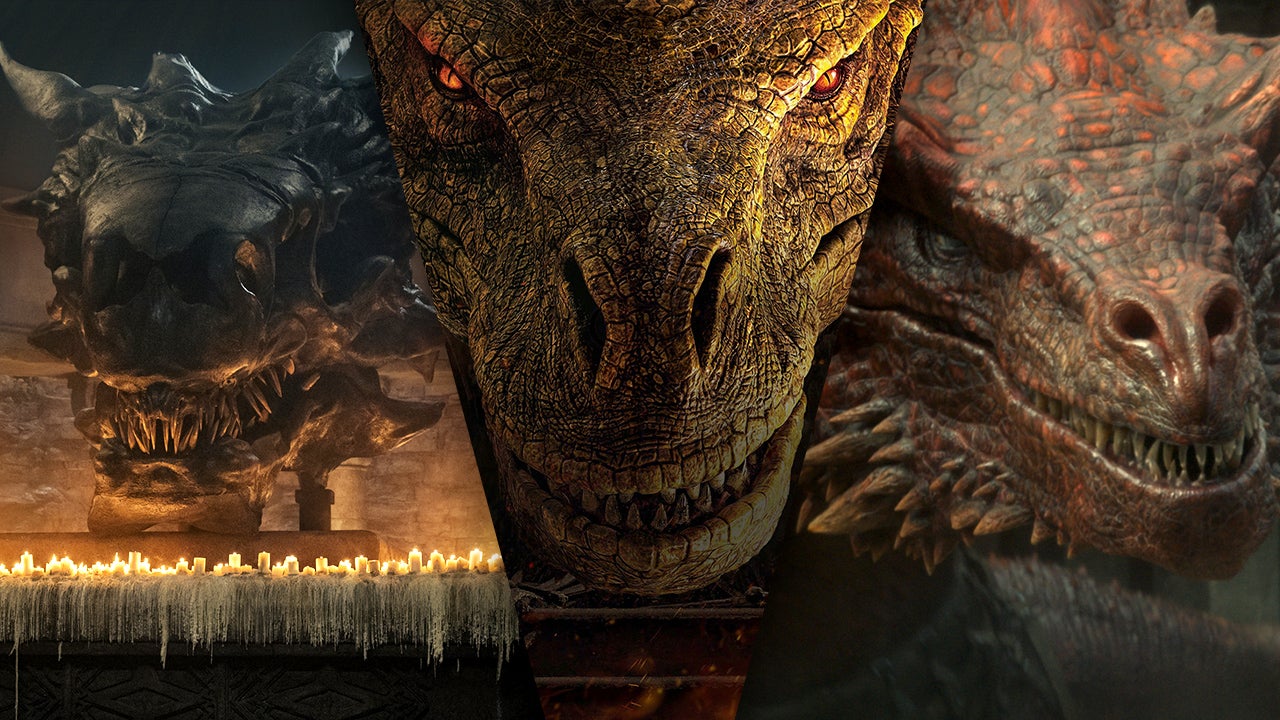 Vhagar is the most massive dragon.

Vhagar was perched atop a cliff.

Vhagar is the largest dragon in the Targaryens’ brood, and in the few aerial shots she’s had so far, the program has emphasized how scary she is.

Vhagar is the oldest of the dragons owned by House Targaryen in “House of the Dragon”; Visenya Targaryen rode him during King Aegon I Targaryen’s reign, many years before the story begins.

Visenya Targaryen rode Vhagar in the past, but in the “House of the Dragon” timeline, Princess Laena Velaryon (Nanna Blondell) owns her. Even when they return to Pentos, we see her flying beside her spouse, Prince Daemon Targaryen (Matthew Smith).

In episode six, Laena suffers a horrific birth that puts her and her kid in danger, and she compels Vhagar to end her suffering by torching her with the all-important word “Dracarys.”

Caraxes may not be the largest dragon in the group, but his neck is longer than the majority of the others. In addition, he has bright red scales, which give him a very striking appearance. Before Aemon Targaryen, the son of King Jaehaerys I Targaryen, was murdered by Myrish pirates, he belonged to the prince.

Daemon Targaryen is in charge of Caraxes.

Prince Daemon Targaryen, who repeatedly rebels against his brother throughout the book, owns Caraxes. He uses Caraxes to scare Ser Otto Hightower’s (Rhys Ifans) forces as they attempt to dislodge Daemon from the castle in episode two. However, things do not go well when another dragon appears…

Scales of the Syrax are yellow in color.

Syrax, a golden dragon of comparable size to Caraxes, provides Otto and the men with their own dragon support. She is a far younger dragon than Vhagar and Caraxes, yet she is no less cruel. It is one of the reasons why Daemon retreats when faced on the Dragonstone bridge. However, this may possibly have something to do with who was riding Syrax.

Yes, Princess Rhaenyra Targaryen (Milly Alcock) leads Syrax, and the first two episodes of the series depict the strong girl riding the yellow dragon. The fact that she is prepared to confront her uncle Daemon is likely one of the reasons he is first attracted to her.

The hole has a little dragon named Vermax.

Vermax is considerably younger than the majority of the other dragons in the series and does not tower above humans like Vhagar, Caraxes, or Syrax. In the sixth episode, the dragonkeepers introduce him to Rhaenyra and Alicent’s children. Vermax has a unique appearance, with green scales and a scarlet spine, but he has not yet gone to the skies.

Jacaerys Targaryen is acquiring the ability to command Vermax.

Jacaerys Targaryen (Leo Hart) is still learning how to handle the young dragon, Vermax, as he receives instruction from the dragonkeepers on how to utilize the “dracarys” command. Vermax reacts to an instruction by roasting a goat, indicating that their efforts are paying off. Poor goat.

Seasmoke participates in the Stepstones war.

Seasmoke is another of the Targaryens’ dragons, but he belongs to the Velaryons because Princess Rhaenys Targaryen (Eve Best) married Corlys Velaryon (Steve Toussaint), also known as the Sea Snake. Seasmoke is a silver-and-gray dragon who proves essential in the War for the Stepstones.

The rider of Seasmoke is Laenor Velaryon.

Laenor (Theo Nate), the son of Rhaenys and Corlys, is the one who saves Daemon in the War for the Stepstones when he faces off against the Crabfeeder and his army.

Laenor finally marries Rhaenyra, and they remain married after the time jump – during which John Macmillan assumes the job. Although Ser Harwin Strong is the actual father of their children (Ryan Corr).

Meleys is referred to as the “Red Queen.”

Meleys is a very enormous red dragon that has been seen only once in “House of the Dragon” thus far, as she heads to King’s Landing alongside Seasmoke and Laenor Velaryon. As tensions increase between the Targaryens and Velaryons, Meleys will likely make a few more appearances before the series concludes.

Eve Best is Rhaenys Targaryen in Game of Thrones.

Laenor’s mother Rhaenys, who is the cousin of King Viserys I Targaryen, rides Meleys. She and Corlys are ready to propose that the king marry Laena at the age of twelve. Thankfully, he declined and instead married Alicent.

It is important to remember that Rhaenys is also the one who cautions Rhaenyra that she is in a hazardous position as Iron Throne heir because most males in Westeros do not want a woman to rule.

It was intended for Baelon Targaryen.

Additionally, there is Dreamfyre. Don’t worry if this doesn’t immediately ring a bell; she was only briefly referenced at the Small Council meeting in episode two. Dreamfyre is mentioned because Daemon steals one of her eggs destined for Rhaenyra’s newborn brother Baelon Targaryen, who died shortly after his birth in the first episode.

In the future, Princess Helaena will ride Dreamfyre.

Princess Helaena (Evie Allen), the daughter of Viserys and Alicent, has not yet become an integral part of “House of the Dragon.” According to the 2018 novel “Fire and Blood” by “Game of Thrones” author George R. R. Martin, however, she will eventually be the one to ride Dreamfyre. Helaena becomes an integral component of the civil conflict, termed the “Dance of Dragons,” that rips House Targaryen apart.

»Who owns the ‘House of the Dragon’ dragons«