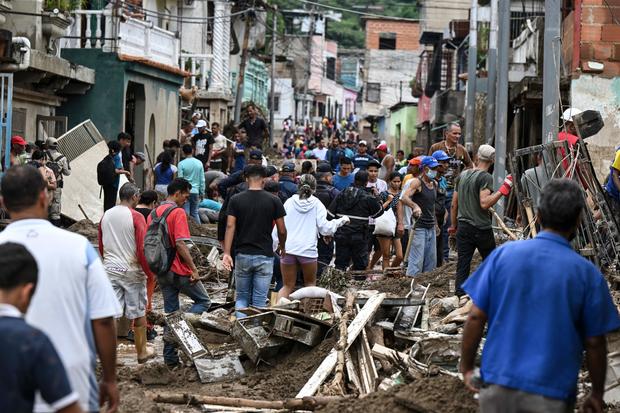 At least 22 people were killed after a landslide carried mud, rocks, and trees through homes in a town in central Venezuela, according to officials. The landslide was triggered by floods and days of heavy rain. There are many of individuals missing.

Residents of Las Tejeras in Santos Michelena, an agricultural and industrial town in the state of Aragua, 54 miles (87 kilometers) southwest of Caracas, had just a few seconds to flee late on Saturday when debris poured down a slope upon them.

She reported from the disaster’s site, “There was a significant landslide in the middle region of Las Tejeras,” where five streams flooded. “There are more than 52 individuals missing, and we have already recovered 22 deceased persons.”

Rodrguez said, “There are still individuals who are walled in.” “We’re attempting to save them, save them alive.”

She indicated that for those who lost their houses, shelters will be put up.

Most of the homes further up the slope were destroyed, including that of several Evangelicals who were praying when the avalanche struck, according to housewife Carmen Teresa Chirinos, a local of Las Tejeras. In front of devastated houses and businesses, families held one another in sorrow.

Many persons are reported missing, according to Chirinos.

Major General Carlos Pérez Ampueda, the deputy minister for risk management and civil protection, had tweeted a few hours earlier that numerous persons had been reported missing in the town’s northern El Béisbol and La Agotada areas. The landslide caused damage to dozens of dwellings.

According to Pérez Ampueda, search activities were being conducted by rescuers using drones and trained dogs. Roads were cleared of debris so that water and power could be restored, and heavy equipment and labor crews cleared the way.

Luis Fuentes, a businessman who built his pizza shop two years ago, lamented that “so many people lost their homes and I, as a businessman, lost my pizzeria.” I have nothing, you see.

The governor of Aragua, Karina Carpio, said that the flood waters “terribly impacted” 21 districts of Las Tejeras, the administrative center of the municipality of Santos Michelena, which has around 54,000 residents.

Flooding has occurred during the previous week in 11 of Venezuela’s 23 states as a result of severe rainfall.

According to President Nicolás Maduro, 20.000 authorities, including rescue workers and security personnel, have been sent to the affected areas.