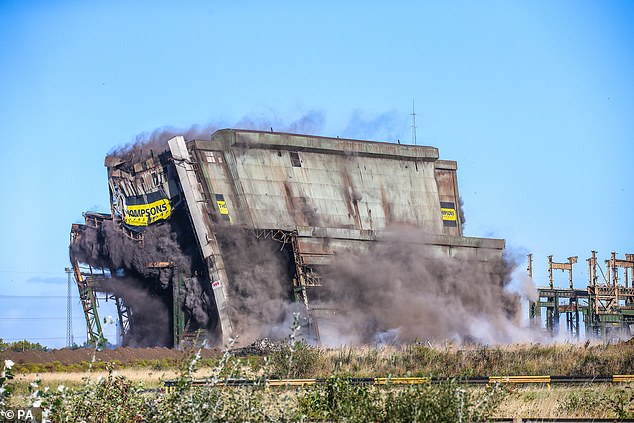 One of the largest explosive demolitions in the UK is said to have taken place when a disused steelworks was demolished.

The demolition, which used almost 1.6 tonnes of explosives, was one of the biggest of its sort ever to take place in the UK, according to the Tees Valley Combined Authority.

Mr. Houchen called the occasion “bittersweet,” but he said that the structure, which is believed to have contained some 105,000 tonnes of steel, had been abandoned since it was shut down seven years earlier.

When SSI UK, which had bought the property in February 2011, was liquidated, the factory was shut down after 98 years of operation.

The same month that it was revealed there were no realistic prospects for bidders to purchase it from the Thai owners, it ceased manufacturing.

Every time one of the historic steelmaking buildings on this site is demolished, Mr. Houchen said, “it is a bittersweet moment since they have played such a significant role in creating our neighborhoods, people, and identity for decades.”

This mill has been idle and unutilized ever since the SSI steelworks shutdown caused such pain in our community almost seven years ago to the day.

“While we reflect on our history, we must never lose sight of why we are taking this action. Today is another step in fulfilling my pledge to create a brighter future for the residents of Teesside, Darlington, and Hartlepool.

We can already see it happening only a few hundred yards away, as SeAH Wind is building a sizable offshore wind production facility. This £400 million investment has already given locals access to high-quality, well-paying employment.

“Net Zero Teesside will soon join it, bringing with it 5,500 new employment created only to construct the £1.5 billion carbon capture, use, and storage power plant.”

“We’re clearing the way for more of the cleaner, safer, and healthier industries of the future, producing high-quality employment for locals,” the statement said.