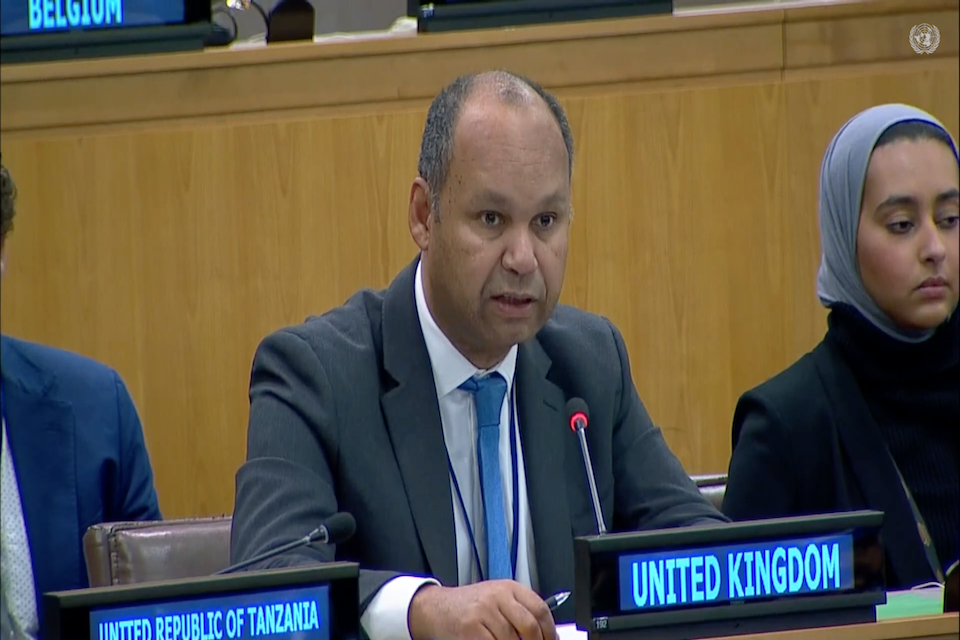 Thank you, Chair, and just to start let me say what a pleasure it is to be back in the Third Committee where I started my UN career.

Mr Chair, seventy-seven years ago the first UN Member States signed the UN Charter, “determined to save succeeding generations from the scourge of war” while “promoting and encouraging respect for human rights and fundamental freedoms”.

Those principles have stood the test of time, and must remain the guiding light for our work at the UN and in the Third Committee. But regrettably, today, the world remains ridden with conflict. While suffering is most acute at the front lines, millions more are impacted by the secondary effects.

Since February, Russia has waged a war of aggression against Ukraine, displaying heinous butchery and wanton destruction. The Independent International Commission of Inquiry on Ukraine concluded that war crimes have been committed. Russia has deployed explosive weapons in populated areas, tortured those in unlawful confinement and some Russian soldiers have committed sexual and gender-based crimes, including against children.

In April, horrific images from Bucha and Irpin demonstrated the lengths Russia will go to to supress dissent: merciless and deliberate killing of civilians. Russia’s barbarism cannot be ignored by this Committee. Those responsible must be held to account.

Russia’s gross and systematic violations of human rights and violations of international humanitarian law are well documented; and it was right that the General Assembly suspended Russia’s membership of the Human Rights Council.

As Russia’s human rights record further degrades, we also welcome the HRC’s decision to examine Russia’s repression of its own citizens. We must support ordinary Russians who face brutal restrictions on fundamental freedoms. And we must recognise how this repression enables Russia’s aggression abroad.

Mr Chair, we also remain deeply concerned by the situation of the Uyghurs and other minorities in Xinjiang. The former High Commissioner for Human Rights found evidence of arbitrary detention, torture, sexual and gender-based violence, forced sterilisations and abortions, and destruction of religious sites. The wealth of evidence led her to conclude that China’s actions may constitute crimes against humanity. Rather than stifle debate and deny the findings, we urge China to implement the report’s recommendations, including by allowing independent UN experts to conduct unrestricted visits to Xinjiang.

Such systemic discrimination only reaffirms the need for our collective commitment to freedom of religion or belief. Building mutual understanding and respect between communities is essential to fighting intolerance. In July, the UK hosted a Ministerial Conference on FoRB and will never stand by while individuals live in fear of discrimination, hostility or acts of violence because of their religion, belief, or ethnicity.

This pursuit of equality is central to the UK’s human rights approach. Nowhere more so than in our efforts to advance gender equality through the protection and promotion of women’s and girls’ rights. We remain steadfast in respecting the bodily autonomy of women and girls as they exercise their sexual and reproductive rights. We must also increase efforts to prevent gender-based violence, and to eliminate harmful practices such as female genital mutilation and child, early and forced marriage.

We also remain deeply alarmed by the continued proliferation of conflict related sexual violence. Next month, the UK will host a Ministerial conference to highlight the best means to prevent CRSV, improve justice and accountability, and understand ways to better support survivors.

Mr Chair, we recognise the vital role of civil society in the promotion of human rights. The UK looks forward to joining the NGO Committee in January. Through our membership, we will continue to champion civil society participation, both in the field and in discussions at the UN.

Mr Chair, we can all do better to uphold our human rights obligations. We must act now and fight impunity wherever it may occur.