When their aircraft crashed in a rural area after colliding with power lines, two Tennessee law enforcement officers perished. As emergency personnel searched for the scene of the incident, lines fell across an interstate and lanes of the highway were shut down, according to officials.

According to Highway Patrol Capt. Travis Plotzer, the collision in Marion County on Tuesday afternoon claimed the lives of a Tennessee Highway Patrol officer and a Marion County deputy sheriff. At a news conference, he declined to answer any questions and their names were not immediately revealed.

He said that an inquiry was being launched by the National Transportation Safety Board.

According to officials, the power lines on Aetna Mountain in Whiteside, Tennessee, were struck by the chopper and fell across Interstate 24. Despite not releasing their names, officials have confirmed that a Tennessee Highway Patrol officer and a Marion County deputy died in the helicopter crash. “Law enforcement is having a very tragic day today. 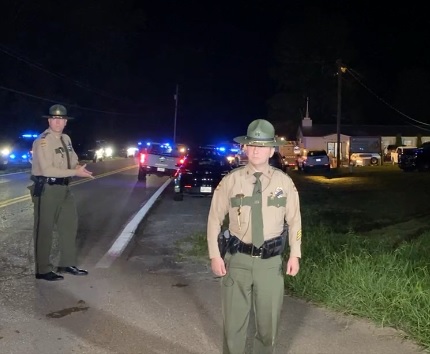 Driver Dan Hostetler told WVLT-TV that just before he was about to be struck by the electrical cables, he observed a black helicopter buzzing around.

Hostetler recalled that the vehicle “kind of dipped and waggled a little bit, then there was a bright flash of light and puff of smoke, and it hit one of the power lines that went across the highway, and sure enough the power lines started gliding down toward me, and all I could think of was it’s going to land on top of me.

” I hit the brakes hard and came to a stop about two car lengths from the line.

The helicopter, a Bell 206B, was identified by the National Transportation Safety Board. The organization is looking into the collision.