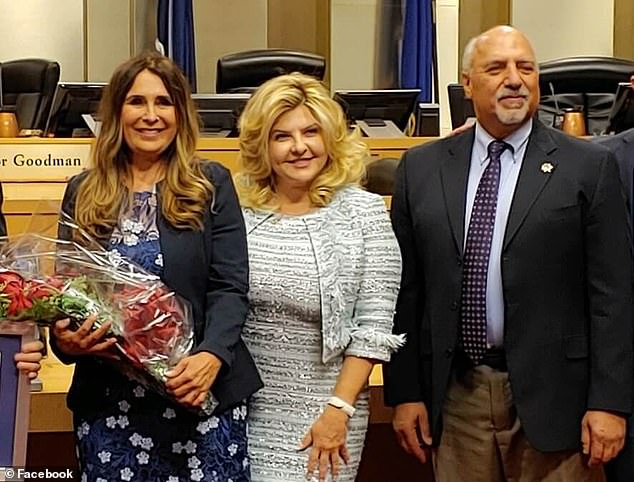 A dispute at city hall that was captured on an ostensibly since-deleted video resulted in the scolding of two Las Vegas GOP councilwomen, among them a Trump-endorsed candidate for Nevada State Treasurer.

For the altercation, in which Michele Fiore allegedly broke Victoria Seaman’s finger and attempted to hurl her to the ground, the two were found to have violated the city’s code of conduct. Fiore disputes the allegations.

The altercation, which happened on January 11, 2021, is described in a 61-page report. Seaman has now sued her fellow Republican senator as a result.

While the Vegas City Council is a nonpartisan body, Seaman and Fiore formerly served together in the Nevada State Assembly. Fiore is the Republican candidate for Nevada Treasurer.

Despite being captured by security cameras and presented to both combatants, the film was eventually removed when the city decided that the demands from the media did not warrant its distribution.

The investigation sought to ascertain the truth of Seaman’s assertions and if a cover-up led to the deletion of the tape.

According to 8 News Now, it was determined that both women had broken the code of conduct and that Seaman’s accusations were unfounded.

According to the Las Vegas Review-Journal, Seaman and Fiore were formerly close friends, but Fiore withdrew after achieving little national prominence.

Although the report mentions “tension between the two women,” she claimed that Fiore became “verbally abusive and more antagonistic” and that she feared Fiore would “say everything she could to frighten” her. However, the investigator found no proof of this.

Fiore disputes Seaman’s allegations that she was assaulted “like an animal” and instead asserts that Seaman kicked her in the shin before she pulled Seaman by the hair to help her fall to the ground.

According to the report, Seaman, Fiore, and other municipal officials viewed the video before saving it on a flash drive.

They further claim that “the evidence does not support a coverup” and that no open records requests were pending at the time the video was erased. They mention that an effort was made to rescue the footage, but it was unsuccessful.

The study concludes that both parties violated the city’s code of conduct, regardless of who initiated the altercation.

Seaman sent a comment on Twitter that said, “The story was complete rubbish.” Consider the fact that Las Vegas conducted its own investigation. That is comparable to a bank robbery investigation. The city has to come honest and show the mysteriously vanished footage. The video has vanished. Who or what is running? Our legal team will continue to advance until there is total openness in the City of LV. Put everyone on oath and let the courts make the decision.

In her unsuccessful bid for the GOP gubernatorial nomination, she burst into the national political scene with an advertisement showing her shattering beer bottles.

Prior to standing for government, she had also shown sympathy for the Proud Boys militia and appeared in a low-budget movie.

In the video, Fiore flaunts her gun and identity as a Washington outsider who supported former President Donald Trump early on as she exits a pick-up vehicle with a Trump 2024 bumper sticker.

The political advertisement is not the first time Fiore has utilized weapons to further her career. She sent out a Christmas card in 2015 with pictures of her family clutching semi-automatic weapons, including her five-year-old grandson Jake holding a Walther p22.

If you look very closely, you’ll notice that his finger is not on the trigger, she said in defense of the photograph.

“My five-year-old grandson has complete control over his trigger finger.”

“I believe giving and receiving weapons as gifts is a fantastic present, and since Christmas is a family event, I think our first job is to defend and ensure the safety of our family.”

Fiore tried her hand in the entertainment industry before entering politics.

Storm Fagan, a wife and mother who chooses to attempt to live out her longstanding ambition of being a famous rock singer, was portrayed by Fiore. Reporters were informed that she gained 20 pounds for the part and dropped 30 throughout the filming.

The 2006 movie’s imdB description reads, “She appears like your average overweight middle-aged wife & mom but her goal of becoming a rock star still weighs heavily on her spirit.” “They” think she can’t do it, yet watch her change and overcome life’s harsh challenges to realize her ambition.

The film was a failure; Fiore herself referred to herself as a “Sundance reject” since just 12 people showed up for a showing at the festival.

Fiore was raised by a Kennedy-era liberal, lesbian mother who attended equality marches in the late 1970s. Fiore was born in Brooklyn. She learned how to use a firearm from her relatives, who were NYPD cops.

According to her biography, she still looks after her mother Lili.

She was twice married and divorced. She married Timothy Johnson for the first time when she was 16 years old and gave birth to her first daughter at the age of 19 while residing on a US Naval Base in Guantanamo Bay.

Sheena and Savanah, two of Fiore’s daughters, are allegedly both wed to first responders named David and Kyle. She has seven grandkids between her two daughters, including Jake, age 10, and twins. Seven-year-olds Morrigan and Mara, Jayden, Jemma, three, Jackson, two, and Jetson the newborn.

Her second husband, Nat Kaime, with whom she co-owned a health care company, was a committed Rush Limbaugh listener, which contributed to her conservatism.

In the end, Fiore started volunteering and running for Congress. The casino magnate Steve Wynn persuaded her to run for the House of Representatives in 2010 amid the Tea Party rebellion. In a primary with eight contestants, she came in second.

»Two GOP councilwomen were reprimanded over a deleted fight video«