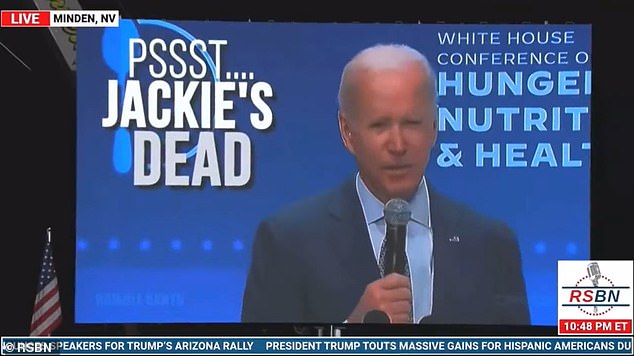 It appears that Donald Trump has found a new method to humiliate President Joe Biden at his ‘Make America Great Again’ rallies by unveiling a video compilation of the Democrat’s many gaffes in the style of professional wrestling.

The two-minute-long video released on Saturday featured a tape of Biden from an event on ending hunger late last month, in which he appeared to cry out for the late Republican Representative Jackie Walorski to commend her for her contributions in the campaign.

Whereabouts is Jackie? Despite Walorski’s untimely death in a car accident with two of her staff members earlier this year, Biden posed the question.

Letters appear on the screen alongside Biden with the fairly crude admonition, “Pssst… Jackie’s dead.”

Biden reportedly apologized to Walorski’s family in a more private setting after the incident.

At his Nevada event on Saturday night, Trump, who is no new to insulting his political opponent, debuted the video.

A narrator proclaims, “Let’s get ready to bumble!” to open the two-minute film with a spin on WWE announcer Michael Buffer’s iconic phrase.

He has displayed similar footage and photos at other rallies, such as his recent event in Michigan, but Saturday’s film appears to be the longest and most meticulously-produced of the bunch.

One moment criticized Biden for appearing to forget that Republican Representative Jackie Walorski had died.

Saturday night, in a rage about the Justice Department’s ongoing investigation into his handling of secret documents, Trump attacked Biden’s mental acuity and again accused him of directing a politicized federal investigation.

In spite of the White House and the president denying any involvement in the inquiry or the August 8 FBI raid that brought it to the public’s attention, this is the case.

Trump told his fans, “You could combine the five worst presidents in American history and they would not have done the harm Joe Biden has done to our nation in less than two years.”

He asserted, “When Biden hears me talk, he realizes he has no choice but to attempt to get me through these prosecutors”

‘That’s the only way he could possibly get me, but I don’t think he can since, first and foremost, we did nothing wrong. It helps when, after six years, you’ve done nothing wrong,’ Trump reportedly added in reference to the numerous investigations against him.

He is unable to speak or think coherently, so he tells law authorities, “Do something about this guy, he’s killing me.”

Trump then addressed the crowd, “So we made a brief movie, would you like to see it?”

This year, Walorski, who was endorsed by Trump before her death, passed away.

The subsequent video depicts Biden’s misstatements and verbal blunders interwoven with clips of him falling down Air Force One’s steps and Jill Biden assisting him with putting on a jacket.

Throughout, 2 Unlimited’s “Get Ready for This” from 1991 plays continuously in the background.

When the video concluded, Trump fans chanted, “Joe must go!”

He is the most recent critic of the 79-year-old president to criticize his unpleasant slip-up over Walorski, whom he backed before her death.

The White House’s handling of the situation sparked a media firestorm of scrutiny.

When pressed by many reporters at her normal news briefing following Biden’s speech, Press Secretary Karine Jean-Pierre consistently refused to call it an error.

She stated again that Biden brought up the deceased congresswoman because she was “at the forefront of his mind.”

Biden himself apologized to Walorski’s family for the incident, according to the South Bend Tribune of Indiana.

They visited with him in the Oval Office during the signing of a measure honoring Walorski.

Keith Walorski, her older brother, told the site that the president was ‘very polite.’

“He brought up the “Where’s Jackie?” remark and basically stated, “I’m sorry that came out the way it did” and that it was a slip of the tongue. ‘He was the one who brought it up, apologized, and we told him we were fine and had no hard feelings,’ Keith added.