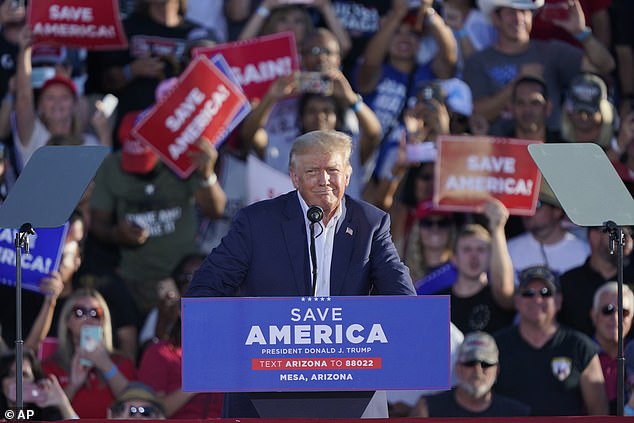 The Jan. 6 committee was criticized harshly by former president Donald Trump for spending “hundreds of millions of dollars” on its probe into the circumstances leading up to the Capitol riot and for neglecting to delve into claims of election fraud.

In a letter to the committee that was made public on Friday morning, Trump said, “This memo is being sent to voice our outrage, dissatisfaction, and frustration that with all of the hundreds of millions of dollars spent on what many regard to be a Charade and Witch Hunt.”

Despite many, insistent demands, you have not given the widespread election fraud that occurred during the 2020 presidential election even a fleeting thought.

In its last open session on Thursday, the committee, which consists of seven Democrats and two Republicans, unanimously decided to subpoena Trump.

In his 14-page paper, Trump made no mention of the subpoena, but he did post a Fox News piece on his Truth Social page stating that a Trump source had indicated the president “loves the idea” of testifying.

Trump argues in the letter that the fact that he received more votes in 2020 than in 2016 makes it impossible for him to have lost.

No incumbent President has gained votes and lost reelection since 1888, he said in his essay. In an unprecedented turn of events in our political history, I earned many millions more votes in 2020 than I did in 2016. No President has lost the General Election since 1960 when you take Ohio, Florida, and Iowa, which I did with a landslide.

With 66.3 percent of those eligible to vote turning out to cast votes, the 2020 election had the greatest voter participation in more than a century. More votes than any other candidate for president—more than 81 million—were voted for Vice President Biden.

“A huge number of American Citizens, including nearly the whole Republican Party, believe that the Election was Rigged and Stolen,” the former president added.

Then, according to Trump, he gave the go-ahead for the National Guard to establish a presence in Washington, D.C. before January 6 because he anticipated a “very massive” turnout that would be “much higher than anybody believed imaginable.”

The National Guard personnel could have easily been present in the Capitol prior to January 6th, according to the Department of Defense timetable, and I completely endorsed this advice and request, he stated.

He said that Nancy Pelosi, the House Speaker, had rejected the authorisation for the Guard.

“The Department of Defense was astonished to get a total denial, in writing, from D.C. Mayor Muriel Bowser and the Capitol Police, who report to Speaker of the House Nancy Pelosi and not to me.”

According to an official sequence of events leading up to the assault on January 6, Sean Gallagher, the deputy head of Capitol Police, was initially contacted by a Defense Department official on January 2, 2021, to inquire about the possibility of a request for soldiers. After discussion with the then-Chief Steve Sund, the proposal was rejected.

According to a Jan. 3 note, “Gallagher answers to DOD via text that a request for National Guard help is not forthcoming at this time after consulting with COP Sund.”