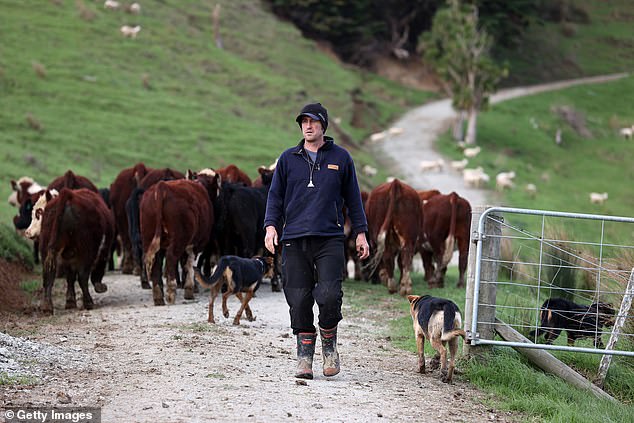 As part of a strategy to combat climate change, the government of New Zealand has suggested charging the greenhouse gases that farm animals produce when they urinate and burp.

The government said that the farm tax would be a first in the world and that farmers should be able to recover the expense by raising the price of items that are environmentally friendly.

Farmers, though, swiftly criticized the scheme.

The idea would “tear the guts out of small-town New Zealand,” according to Federated Farmers, the industry’s leading lobbying organization. Farms would be substituted with trees.

According to Andrew Hoggard, president of Federated Farmers, farmers have been working with the government for more than two years to develop an emissions reduction strategy that won’t reduce food production.

Hoggard said, “Our objective was to keep farmers farming.” Instead, he said that farmers would sell their land “so quickly” that you wouldn’t even see the dogs howling as they departed in their pickup trucks.

The idea, according to opposition MPs from the conservative ACT Party, would actually raise global emissions by shifting farming to nations that were less effective at producing food.

The agricultural sector in New Zealand is essential to its economy. China’s top export is dairy goods, which are also used to create baby formula there.

In New Zealand, there are just 5 million humans, but there are also 26 million sheep, 10 million beef and dairy cattle.

Due to its oversized sector, New Zealand is uncommon in that farms are responsible for nearly half of the country’s greenhouse gas emissions. Particularly methane from the burps of cattle and nitrous oxide from their urine, farm animals emit gases that warm the globe.

The discussion regarding farming’s effects on the environment and the efforts some believe are necessary to mitigate them is a part of a larger global debate that goes beyond New Zealand.

Farmers in the Netherlands have drove tractors down major highways and dropped hay bales on the ground to protest government attempts to reduce harmful pollution emissions.

By 2050, the New Zealand government intends to cut greenhouse gas emissions and achieve carbon neutrality. A commitment to cut farm animal methane emissions by 10% by 2030 and up to 47% by 2050 is a part of that strategy.

Farmers will begin paying for emissions under the government’s planned scheme in 2025, but the cost has not yet been decided.

All of the money raised from the planned farm tax, according to Prime Minister Jacinda Ardern, will be reinvested in the sector to finance new technologies, research, and incentive payments for farmers.

According to Ardern, “New Zealand’s farmers are likely to be the first in the world to decrease agricultural emissions, preparing our greatest export market for the competitive advantage it brings in a world that is more selective about the source of its food.”

Damien O’Connor, New Zealand’s minister of agriculture, described it as an exciting prospect for the country’s farmers.

Farmers are already feeling the effects of climate change, according to O’Connor, who noted that droughts and floods are occurring more often. It is advantageous for the environment and our economy to take the initiative in reducing agricultural emissions.

The liberal Labour government’s idea is reminiscent of a previous Labour administration’s 2003 attempt to charge farm animals for their methane emissions, which was also unsuccessful.

Farmers at the time fiercely resisted the plan, and political opponents mocked it as a “fart tax” (though technically a “burp tax” would have been more appropriate given that most methane emissions are caused by belching). The idea was ultimately dropped by the administration.

Since Ardern’s reelection in 2020 in a landslide win of historic proportions, surveys show that Ardern’s Labour Party has lost support and has overtaken the major opposition National Party.

Farmers in New Zealand have significant political influence, so if Ardern’s administration can’t come to an agreement with them on the idea, it will probably be more difficult for Ardern to win reelection when the country goes to the polls again the following year.