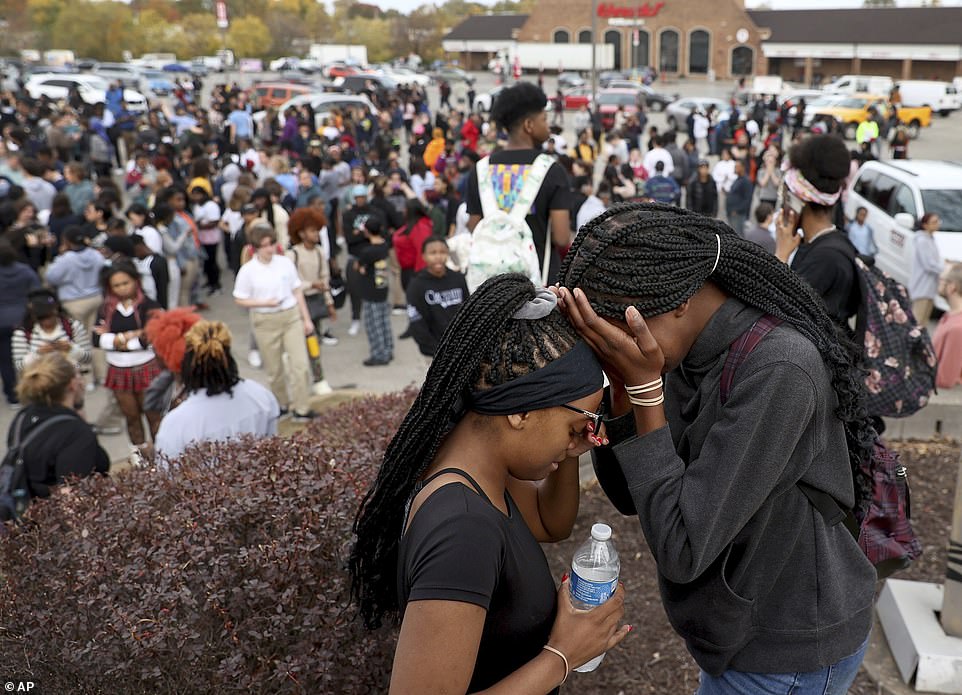 On Monday, a shooter clad entirely in black opened fire at a performing arts school in St. Louis, killing a female adult and a teenage girl who were later slain by police.

Two of the victims were pronounced dead at the scene: an adult woman and a teen girl. The severity of the injuries sustained by the remaining seven victims who were carried to the hospital is unknown.

Their traumas include gunshot wounds, shrapnel injuries, and even cardiac arrest.

The shooter has not been identified, and it is unknown how he gained entrance to the facility; authorities insist the doors were secured this morning, but refuse to comment on how he managed to enter.

Students evacuated the school by climbing through windows and onto roofs, as they were terrified. The shooter was slain by police after he killed two people.

On Monday, October 24, 2022, students stand in a parking lot near the Central Visual & Performing Arts High School in St. Louis after a reported shooting at the school.

This was the scene Monday morning outside Central Visual and Performing Arts High School in St. Louis when a gunman opened fire and killed two people.

Less than four hours into the school day, students were evacuated due to the presence of an active shooter.

Monday morning, a swarm of police cars was visible outside the Missouri school.

Armed officers approached the scene with caution after two students were shot by an unnamed suspect. According to district officials, officers were able to swiftly halt the shooter by fatally shooting him.

Sack stated that as students fled the building, several reported to authorities that the culprit was inside with a ‘long gun.’

‘As children fled the building, they spoke with several of the children who informed them that the shooter was armed with a long gun,’ Sack said during the press conference.

He continued by saying that the officers then entered the school, located the shooter, and fatally shot the suspect.

The commissioner indicated that there was an exchange of gunfire after the officers located the subject. He also stated that it is yet unknown how the suspect gained entry.

“The doors were locked,” Sack declared.

In addition, according to a district official, there were seven security officers inside the premises before police arrived.

After a reporter asked the police commissioner how the gunman obtained entry, Sack said, “We will not discuss how the suspect acquired access.”

Monday, October 24, 2022, in St. Louis, authorities examine the scene of a shooting at Central Visual and Performing Arts High School.

Monday, October 24, 2022, in St. Louis, authorities examine the scene of a shooting at Central Visual and Performing Arts High School.

Jones stated, “I’m stressed and heartbroken; I’m heartbroken for these families.” Our children should not be subjected to this. They shouldn’t be required to participate in active shooter drills, but regrettably, that is exactly what happened today.

Jones also replied to the news of the massacre earlier in the day with a gloomy tweet made just before 10:30 a.m.

The group also commended the officers who “rushed to the shooting” inside the school.

“I also want to thank our first responders who rushed in to ensure the safety of our infants and took care of the problem as quickly as possible,” stated Mayor Jones.

Another school official stated, “I do feel that their prompt efforts saved lives, so thank you to the police department.”

Cori Bush, a member of Congress, was also present at the press conference. The Democrat represents the district that contains St. Louis.

Rep. Bush stated, “Today is one of those days, those days that we pray never occur in this country.”

The congresswoman stated, “We want to thank again our first responders, but we also want to thank those teachers, school employees, and administrators that were in place, moving, and prepared.” Those who were there to support the students previously and those who are there currently.

Rep. Bush stated that any families or victims ‘who don’t know who to talk to’ can call her office for assistance, noting that the phone lines will remain available.

St. Louis Public Schools tweeted on Monday morning, “Police are at Central Visual and Performing Arts this morning in response to reports of an active shooter, and both CVPA and Collegiate are on lockdown.”

Students were transported to “safe and secure” locations.

Later, they disclosed that parents and students might reunite at the Gateway STEM School, which is two miles from CVAP.

Monday, the school district requested that officials avoid the area between S. King’s Highway and Arsenal Street “until further notice.”

Governor Mike Parson of Missouri replied to the incident on Monday via social media, thanking the officers who raced to the site and expressing his ‘prayers’ for the victims.

The victims and their families of this morning’s shooting at Central Visual and Performing Arts High School in St. Louis are in our thoughts and prayers. This tragedy has been briefed to our office.

‘State Public Safety officials are collaborating with local law enforcement and have provided any state resources required to aid in the investigation.

‘St. Louis Metropolitan Police Department (OFFICIAL) responded swiftly to the sound of gunfire in order to protect lives, secure the area, and neutralize the threat.

We are praying for the victims, their families, and the community as a whole.

Trudy Busch Valentine, a Democrat competing for an open U.S. Senate seat in Missouri, also responded to the news via Twitter, expressing her own grief as a’mother and grandma.’

“As a mother and grandmother, I am appalled and praying for all those affected, including students, parents, educators, and community members.” I am appreciative of law enforcement’s prompt response.