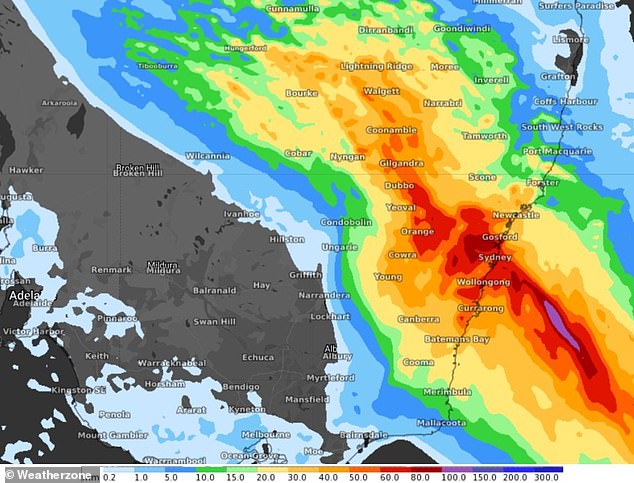 Australia’s east coast is expected to get a month’s worth of rain in a matter of days due to erratic weather that has raised concerns about severe flooding.

On Wednesday, when the rain continues eastward toward the coast, southern Victoria, inland NSW, and south-western Queensland will see the worst of the unpleasant weather.

150 millimeters of rain, or almost a month’s worth, might fall in a few isolated locations during the next several days.

Thanks to the rain this week, Sydney is also expected to have its wettest year since 1858, according to Weatherzone.

Sydney needs a another 82 millimeters to tie the previous record, and it so happens that prediction models anticipate between 70 and 110 millimeters up to 9 am on Monday, according to Weatherzone.

Dean Narramore of the Bureau of Meteorology has issued a warning that severe flooding is possible this week in rural NSW.

“Unfortunately, a lot more rainfall is on the way,” he warned. “Our dams are full, our soils are saturated, and we can’t take any more rainfall.”

In central and western NSW, heavy rains between 20mm and 50mm are expected to occur on Wednesday and Thursday.

The BoM predicts rainfall of between 50mm and 150mm across rural NSW on Friday and Saturday, particularly in Dubbo and Orange, making the rain only become worse throughout the weekend.

In NSW, there are warnings for minor, moderate, and catastrophic floods.

Three rain storms that are traveling east over Australia are to blame for the awful weather.

According to Mr. Narramore, “this rainfall is anticipated to cause extensive flooding over many of our rivers across NSW.”

Communities that have recently suffered floods are at more danger, he added.

The announcement of the alert coincides with NSW’s third straight La Nina season.

On Wednesday, as a trough pushes moisture through rural NSW, heavy rain and thunderstorms with a chance of flash floods are forecast in the western regions of the Riverina and Central West Slopes and Plains.

A significant portion of the state’s west, from Nyngan in the central north through Deniliquin near the Victorian border to Broken Hill in the center west, is under a severe rainstorm warning.

On Wednesday, dangerous wave and surf are predicted along the Macquarie, Hunter, Sydney, Illawarra, Batemans, and Eden coastlines.

According to Mr. Narramore, a second trough will move into southern Victoria on Thursday night and into Friday, bringing storms, rain, and brief periods of heavy rainfall from Queensland.

Finally, on Saturday and Sunday, a third system of rain will move through southern Queensland, New South Wales, and eastern Victoria.

With increases anticipated throughout the weekend, a flood watch has also been issued for rivers closer to the coast, including the Hunter, Hawkesbury, and Colo rivers as well as the Wollombi Brook, for minor to moderate flooding.

In terms of the major cities, Sydney is expected to get up to 20mm of rain on Wednesday and a high of 20°C.

The Harbour City is expected to see similar weather on Thursday.

A rainy Wednesday with a high of 17C will also be seen in Melbourne, while up to 25mm of rain may fall in Canberra.

Today will be mostly sunny in Brisbane, with just a 30% chance of rain and highs of 23C.

Although Adelaide may have a few showers, the most of the rain will begin to fall there on Thursday.

From Wednesday, Hobart will be gloomy, and on Thursday through the weekend, it will begin to rain heavily.

Perth, on the opposite side of the nation, will also see terrible weather on Wednesday, with between 5mm and 10mm of rain predicted.

Over the next days, Darwin could expect storms.