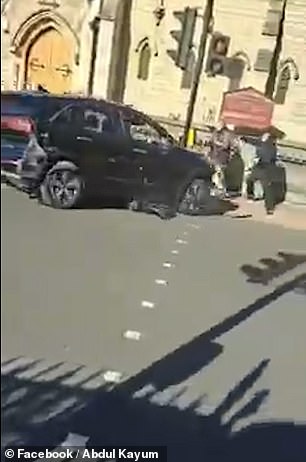 This horrible incident occurred when an elderly was crossing the street and was struck by a vehicle. He immediately retreated in fear.

In Bow, East London, shocked spectators watched in terror as the 70-year-old man urgently tried to climb out of the path of the erratic Kia 4×4.

The elderly pedestrians are shown being screeched at by a black engine that already has its bumper hanging off of it as a hapless bystander cries out, “No, oi, oh my God.”

The terrifying video, which was captured on Monday, shows the two terrified pedestrians — one of them is using a walking stick — scrambling to get out of the path as the car races toward them.

Only one, though, was able to avoid the Kia, falling to the ground just before the stampeding vehicle smashed into the wall and left it “in parts.”

The second man, who had been less fortunate, had missed the destroyed automobile and lay bleeding on the ground as frightened onlookers raced to help him.

The elderly man was seen on camera writhing in pain and wailing on the ground as blood was trickling from his head.

While a woman urges the injured OAP, “sweetheart, don’t move,” as he clings to her hand, one man who ran over to rescue him cried, “Police call, police call.”

The Kia’s driver stayed seated in the vehicle, apparently shaken by the collision while onlookers dialed 911. The Kia looked to have scratch marks on the back bumper.

With a head injury, the sufferer was brought to the hospital. According to The Sun, his illness is not believed to be life-threatening.

Following the collision, no one was taken into custody, but the Metropolitan Police stated it is still looking into the terrible occurrence.

‘Police were alerted at 12.02pm on Tuesday, October 18 to reports of an accident between a vehicle and a pedestrian in Bow Road, E3,’ said a Met Police spokesperson.

Along with the London Ambulance Service, officers attended.