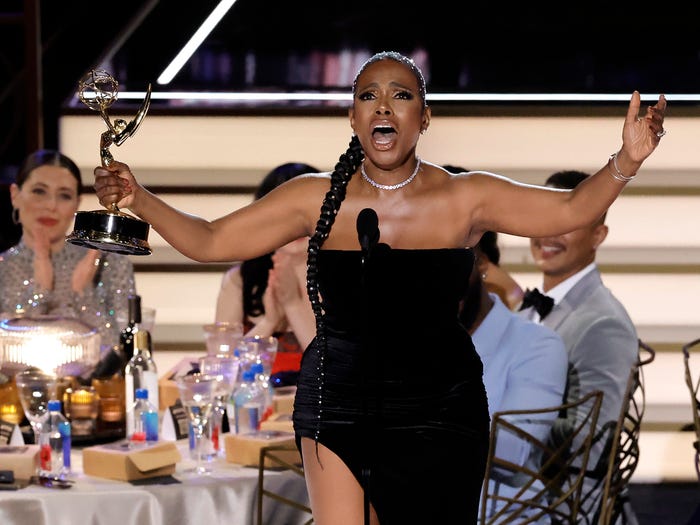 Ralph said to ESSENCE that Blackwood’s black, sleeveless velvet dress had rescued her from a bad night.

She told ESSENCE during a red carpet interview, “Brandon Blackwood—you know Brandon for the bag—came to my rescue.

As a result of her work on “Abbott Elementary,” Ralph became the first Black woman to win the Emmy for Outstanding Supporting Actress in a Comedy Series since Jackée Harry did it for “227” in 1987.

After she performed a lyric from the 1993 song “Endangered Species” by jazz vocalist Diane Reeves, her acceptance speech soon went viral.

Ralph completed the outfit with a tiny Kendrick trunk bag that was also created by Blackwood and decorated with sun-shaped crystals. It complemented the coral colour of the inner of the gown, which could be seen through its wide split.

Roberto Johnson, Ralph’s stylist, incorporated the high glitter of the purse into her makeup look. She had coral nail paint on and a braid by Moira Frazier that was bejewelled.

The Blackwood’s company shared on Instagram how happy it was at the publicity. The brand’s account commented on a photo of Ralph on the carpet with the message, “A BB gown and bag on the Emmy Carpet #Major.”

“We created our first gown ever for an amazing ICON! Thank you @thesherylleeralph for letting my team and I make this dress for you!” it added.

The designer, of Jamaican and Chinese ancestry, was born in Brooklyn and spent his formative years in both New York City and Tokyo. In 2015, while Blackwood was still in his early 20s, he introduced his first collection of handbags.

Blackwood launched a tiny tote in 2020 with the slogan “END SYSTEMIC RACISM” in support of the Black Lives Matter movement, and he donated the proceeds from its sale to neighbourhood charities.

With his ever-popular Kendrick trunks and Kuei bags, his celebrity power only increased.

The ESR tote, as it rapidly came to be known, became the internet’s “it bag.”

Blackwood has gained popularity among celebrities. He has been seen wearing his creations on celebrities including Kim Kardashian, Olivia Rodrigo, Megan Thee Stallion, Lala Anthony, and Saweetie.