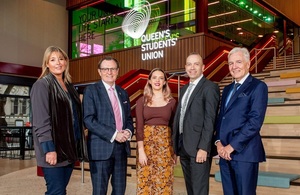 Chris Heaton-Harris, Secretary of State for Northern Ireland, met with young people at Queen’s University Belfast to discuss arrangements for the 25th anniversary of the Belfast Good Friday Agreement in 2023.

Speaking with students during a visit to One Elmwood, Queen’s University’s new Student Centre and Students’ Union, the Secretary of State emphasised the importance of education in enhancing understanding and recognition of the Belfast (Good Friday) Agreement’s transformative role in Northern Ireland and the rest of the United Kingdom.

He stated: “The 25th anniversary of the Belfast (Good Friday) Agreement marks an extraordinary achievement for Northern Ireland, with the Agreement helping to lay the foundation of a more peaceful and prosperous Northern Ireland that we see today.

“I’m delighted to hear about Queen’s University Belfast’s programme, and to discuss with young people what the anniversary means to them – they are key to safeguarding the benefits of the Agreement for the next generation.

“This anniversary moment provides us with a great opportunity to ensure that young people in Northern Ireland, and across the entirety of the UK, are well informed and can fully engage with the progress that has been made since the signing of the Agreement.

“Queen’s University Belfast is honoured to be the host the signature event to mark the 25th anniversary of the signing of the Good Friday Agreement.

“With current world leaders, as well as architects of the original Agreement, coming to Belfast to mark the anniversary it is fitting that it takes place in an institution which places social and civic responsibility at the heart of what it does.

“In partnership with the Senator George J. Mitchell Institute for Global Peace, Security and Justice, the three day conference will offer a unique opportunity to both reflect on the achievements of the Agreement and to discuss the challenges and solutions needed to drive forward a peaceful and prosperous future for the region.”