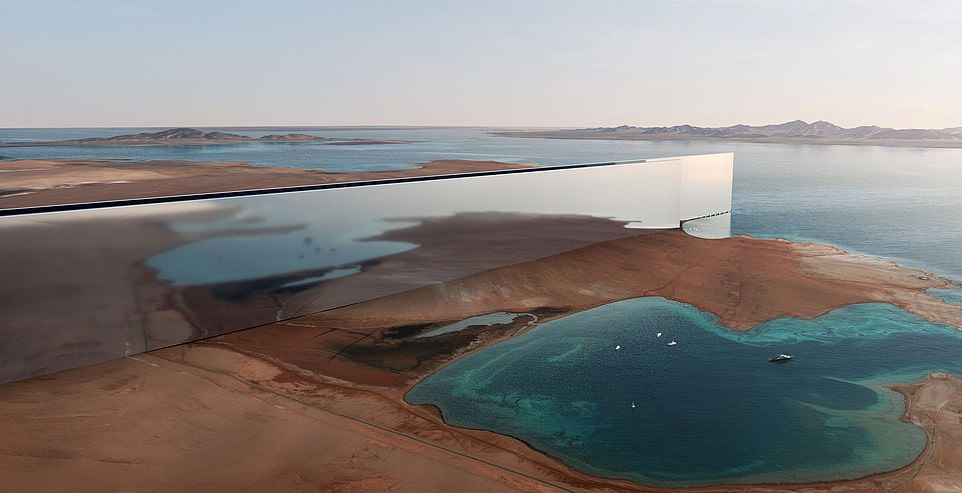 The project, which was announced by Crown Prince Mohammed bin Salman, is a component of the enormous Neom desert complex, which will also include an artificial ski resort, a 100-mile vertical city, an octagonal floating port city, flying elevators, a swimming lane for commuters, and robots and artificial intelligence to assist its future residents.

Excavators can be seen digging a hole in the desert in the video. The city’s foundations are anticipated to be erected inside the trench.

Additionally, there are proposals to build an underground transportation network that would run the whole length of the city.

The megacity, which has a maximum population of nine million, was first revealed this year.

After the city was presented, not everyone was sure that the employees could genuinely create the metropolis.

However, it seems from the video that the city is indeed being created and that the dream will come true.

The Line was mentioned by Tarek Qaddumi, executive director for urban planning at Neom, to Dezeen.

According to him, The Line will “revolutionize our existing way of existence.”

He also said that the megacity would be net-zero during its entire lifespan, despite some experts’ doubts about the project’s viability and if people will be able to live there.

The sci-fi-inspired interiors of the linear metropolis are shown in the design blueprints, with angular glass buildings bending and twisting over an artificial river.

In the enormous tropical city that resembles a Star Wars set, trees cling to the futuristic structures that will be entirely powered by renewable energy.

According to Bin Salman, he wants his nation to host a building endeavor that is as recognizable and enduring as the Egyptian Pyramids.

He said at the time that “The Line is a project that is a civilizational revolution that puts humanity first.”

The Mirror Line will span 75 miles of desert, coastal, and mountainous terrain with two 1,600-foot-tall structures running parallel to one another.

Engineers have estimated that building the Mirror Line may take 50 years, but Prince MBS has said that he wants it finished by 2030.

The structure will rest on struts to allow for the curvature of the Earth due to its length, and a high-speed rail line will run below it.

The Wall Street Journal said that if the tower is finished, it would reach from the Gulf of Aqaba, over a mountain range, and then continue down the coast into a desert “aerotropolis.”

Salman said that the initiative sought to make it possible for a million inhabitants to go from beginning to finish in a 20-minute span and to meet within a five-minute walk.

The futuristic structures have an elaborate interior with silver sheen, stairwells, and dwellings to form a linear village.

According to the Wall Street Journal, the multi-trillion dollar project will accommodate five million people once it is finished and a high-speed rail would run below the structures. Additionally, it will include a yacht harbor below the buildings’ arches.

According to reports, residents would pay a membership for three meals every day, and the community of millions will also be nourished by vertical farming that will be built into the walls of the gleaming structures.

The futuristic structures have an elaborate interior with silver sheen, stairwells, and dwellings to form a linear village.

According to the Wall Street Journal, the multi-trillion dollar project will accommodate five million people once it is finished and a high-speed rail would run below the structures. Additionally, it will include a yacht harbor below the buildings’ arches.

According to reports, residents would pay a membership for three meals every day, and the community of millions will also be nourished by vertical farming that will be built into the walls of the gleaming structures.

The structures, according to Prince MBS, would be completely carbon neutral and beneficial to the surrounding ecosystem.

In addition to being hot, sticky, and dusty, desert life will also include a sports arena that will be 1,000 feet above the earth in the Mirror Line.

According to the Wall Street Journal, Salman is also hopeful that the Neom as a whole would generate thousands of new employment and enable the oil-rich nation to reduce its reliance on the resource for income.

However, as many Western nations continue to boycott the nation due to suspected human rights abuses, international investments in the Neom have not been as plentiful. The murder of journalist Jamal Khashoggi was allegedly ordered by Salman in 2018, however the Crown Prince has refuted this claim.

Some people with less political integrity have questioned if the proposed initiatives are just too ambitious. Prior to running into finance issues, Saudi Arabia gave up on ambitions to construct a skyscraper that would have been one mile tall and the highest structure ever.

According to the Wall Street Journal, high oil prices are actually assisting Salman in advancing the Mirror Line and Neom project by providing cash for the pricey undertaking.

When Neom was revealed, however, after tribes had been forcefully evacuated from the region and a resident had reportedly been killed by security, it also drew condemnation for violating human rights.

The project is scheduled to be finished in 2030, but contractors and urban planners are having trouble finding answers to several issues. The project’s intended completion date was 50 years.

Planners are having trouble determining if inhabitants would contemplate living in a high-rise building during the epidemic, as well as how to cope with animal and bird migration and how the construction may affect groundwater flow.

Environmental planners claim that the Mirror Line’s size and length may interfere with migrating bird patterns, and that the building’s mirrored windows may further confuse the birds, undermining the project’s efforts to be environmentally beneficial.