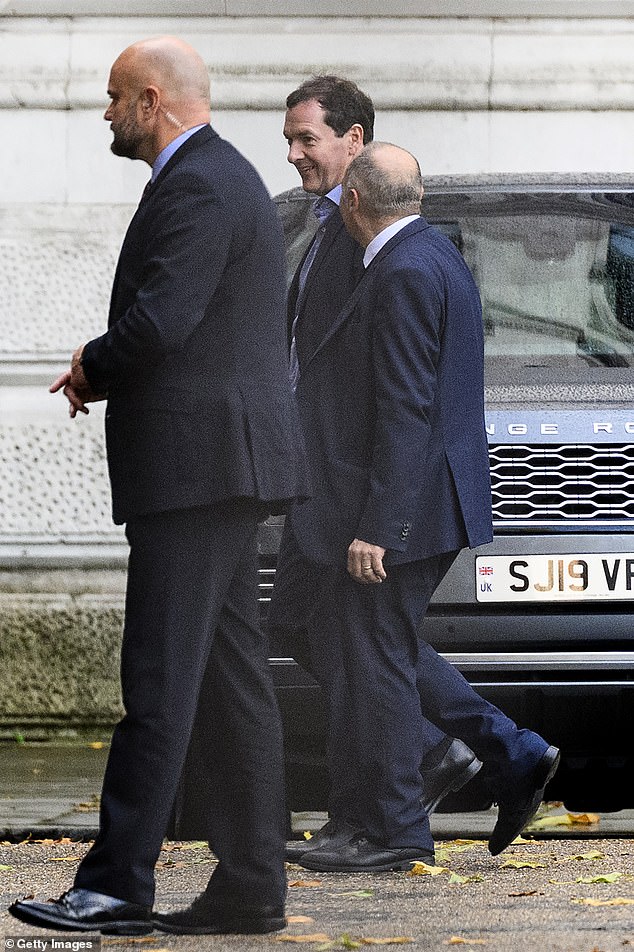 Rishi Sunak warned today that a massive package of spending cutbacks and tax increases is the only way to prevent further interest rate increases.

The Prime Minister stated during a hospital visit in Croydon that he and Chancellor Jeremy Hunt are determined to take ‘tough decisions’ to return borrowing and debt to a sustainable trajectory.

He stressed that the only way to ‘control as much as possible’ rising interest rates that are threatening to devastate family budgets was to ‘get a grip’ on inflation.

Mr. Sunak and Mr. Hunt are rumored to be seeking £50 billion in public spending cutbacks and tax increases to help close the budget deficit.

But the new prime minister received a boost today from a poll showing that Labour’s lead has been narrowing since he took office.

This is plenty for a landslide victory in a general election, but it is less than the eye-popping 37 points reported four days earlier when it was unclear who would succeed Liz Truss.

The Conservatives increased their support from 19 percent to 23 percent, while Labour dropped from 56 percent to 51 percent, contributing to the narrowing.

After Ms. Truss’s dismal 49 days at the helm, Downing Street will intently monitor the upcoming days for any signs of a Tory recovery.

Since Rishi Sunak resigned as chancellor earlier this year, the public finances have deteriorated.

The Prime Minister and Mr. Hunt spent yesterday examining the government’s accounts, and briefings have feverishly attempted to dispel rumors that the situation may not be as dire as anticipated.

Since Mr. Hunt and Mr. Sunak took office and lowered interest rates on UK borrowing, the markets have stabilized. This could improve the picture the OBR watchdog is expected to deliver on November 17, after the fiscal event was postponed from Halloween to allow for additional time to ponder the revisions.

As GDP lags, however, sources have emphasized that tax collections will remain below expectations.

He has spoken with all prior chancellors dating back to 2010, including Kwasi Kwarteng, whose mini-Budget caused market chaos.

A Treasury insider told The Times, ‘Markets have slightly stabilized, but the outlook remains dismal.

“Britain is in the midst of an economic crisis and must fill a big fiscal void.

People should not underestimate the magnitude of this problem or the difficulty of the decisions that must be made.

We have witnessed the consequences of governments ignoring this reality.

Prime Minister David Cameron and Chancellor George Osborne are rumored to have concluded that an additional £10 billion in cuts or tax increases will be required to help balance the nation’s accounts.

Mr. Hunt’s savings plan is said to have found a shortfall of up to £50 billion, comprised of a £40 billion black hole and a £10 billion buffer.

If thresholds are frozen for another two years, millions more workers will be forced to pay the basic and higher tax rates, according to a study conducted last night.

According to a study, almost three million more taxpayers will pay the 40p rate under the present freeze in effect until 2025-26, with an additional 3.5million paying the 20p rate.

If the freeze on thresholds is extended until 2027-28, however, another three million could be forced to pay either the lowest or higher tax rates, a situation that has been nicknamed a “stealth tax.”

Ministers exerted pressure on Mr. Sunak to keep the pension triple lock after Downing Street signaled that it may be subject to revision.

As the Prime Minister and Mr. Hunt struggle to cover a £40billion shortfall in the public budget, the Government is allegedly mulling a two-year extension of the income tax levels freeze.

The Bank of England expects the existing freeze will generate £30 billion by 2025-26. According to the Institute for Fiscal Studies (IFS), a two-year extension might generate an additional £4-5 billion.

The IFS report projects that 7.7 million workers will be subject to the 40p income tax rate by 2025-26, compared to 4.6 million if the thresholds were not frozen and raised with inflation.

During the probable two-year extension period covering 2026-27 and 2027-28, a separate analysis by the Centre for Economics and Business Research suggests an additional three million workers may be compelled to pay the basic and higher rate of tax.

Freezing the personal allowance and the higher-rate threshold until 2026 may increase the income tax burden of a worker earning £60,000 by up to £14,990.

Tom Wernham from the IFS stated, “The government confronts difficult decisions.” However, increasing taxes through freezing thresholds is confusing and deceptive. A Treasury spokeswoman stated, “We do not comment on tax change rumors outside of fiscal events.”

Yesterday, Downing Street intimated that the state pension triple lock may be subject to modification to make it more sustainable and “give long-term stability.”

The triple lock, which was implemented in 2010, assures that the pension will increase by the greater of inflation, earnings, or 2.5%. Minister of the Cabinet Office Nadhim Zahawi stated that ‘difficult measures’ would be required to balance the books in the Budget next month.

He said, however, that seniors should be safeguarded because they are “uniquely vulnerable” in times of high inflation. He stated, “I know the Prime Minister and Chancellor will be acutely aware of this fact.”

A second minister stated that dropping the triple lock, which the Conservatives vowed to retain in their 2019 platform, would be “electoral suicide.”

The official spokeswoman for the prime minister stated, ‘We recognize that uncertainty is tough for retirees and other groups. In light of this, the Prime Minister and the Chancellor feel it is necessary to take the time to craft ideas that would guarantee long-term stability.

“Decisions will be informed by the government’s values and made with compassion.”

On Thursday, former Chancellor of the Exchequer George Osborne enters the rear of Downing Street.