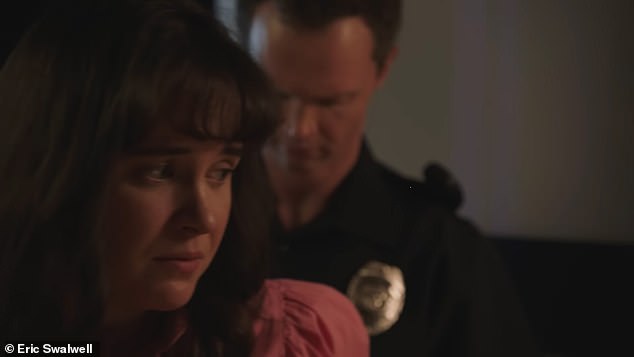 Republicans criticized Democratic Rep. Eric Swalwell after he unveiled a new commercial in which he claimed the GOP wanted women to be imprisoned for getting abortions.

The advertisement begins with a family having dinner together and a knock on the door. A warrant for the mother’s arrest for “unlawful termination of a pregnancy” is held outside by two police officers.

The lady responds, “That’s my own business.” The cops said, “That’s up to the courts to determine.”

The woman is then taken into custody under threat of force while her children sob and her husband object.

“MAGA Republicans want women who get abortions to be detained.” This is how that seems. Swalwell captioned the video with the hashtag “#LockHerUp.”

Conservatives, many of whom have taken care to avoid advocating for penalties for the woman who has the abortion, did not like the advertisement.

The legislation introduced by Sen. Lindsey Graham, which forbids physicians from conducting abortions at 15 weeks, does not impose fines on women who choose to have an abortion.

In March 2016, while he was still a newcomer to the anti-abortion movement, former President Trump received a scathing response from pro-lifers for suggesting that women who seek abortions illegally should face “some type of penalty.”

‘Once again Donald Trump has proved that he hasn’t truly thought through the problems, and he’ll say anything simply to grab attention,’ said Ted Cruz, Trump’s then-rival, in a statement. Of course, we shouldn’t be discussing penalizing women; instead, we should uphold their dignity and celebrate the amazing gift of procreation they possess.

In 2019, Pennsylvania GOP gubernatorial candidate Doug Mastriano, who was then a state senator, said that women who obtain illegal abortions should be charged with murder. Since then, he has distanced himself from the remarks and said that his personal beliefs are “irrelevant” because the legislature is responsible for passing laws.

The host of a conservative radio talk program stated of the new advertisement, “The only takeaway I get from this is Eric Swalwell has a very condescending, disgusting, bigoted attitude of police enforcement.”

“Eric Swalwell is a rubbish person,” someone said.

I don’t believe there is a single Republican contender for president who has advocated detaining women who have abortions. So be it. Ben Kew, editor of the Spanish conservative website El American, advised readers to never let the facts get in the way of a good tale.

But several Democrats were touched by the advertisement.

“This advertisement is terrifying.” Eliza Orlins, the public defender for New York City, said on Twitter, “I hope everyone sees it and takes the lesson to heart.”

Fred Guttenberg, an activist whose daughter perished in the Parkland tragedy, said, “This is the most poignant commercial I have seen.”

“ELECTIONS HAVE IMPLICATIONS! This election will have a greater impact than any other in our lives. VOTE ON THE REAL ISSUE THAT WILL AFFECT US FOREVER WHEN YOU VOTE. ONLY VOTE FOR DEMOCRATS!

In the secure Democratic district of California’s 14th, Swalwell is seeking reelection.

However, Republicans have a better chance of regaining control of his chamber.

Democrats had believed that the Roe v. Wade decision would provide them a political advantage in the next midterm elections.

Only 5% of prospective voters, according to a New York Times/Sienna College survey issued on Monday, rank abortion as the most important issue confronting the nation. 26 percent of respondents see the economy as the main problem, while 18 percent point to inflation.

That amount is three times what Democrats spent on pro-abortion advertisements during the whole 2018 general election.

The DCCC and at least seven super PACS have both made abortion rights the centerpiece of their messaging. According to AdImpact, outside organizations have spent more than 40% of their entire broadcast TV budget on pro-abortion advertisements.

While Republicans are avoiding the subject and focusing instead on crime, inflation, and the border, the advertisements generally portray Republicans as radicals who want to take away rights for half the population.