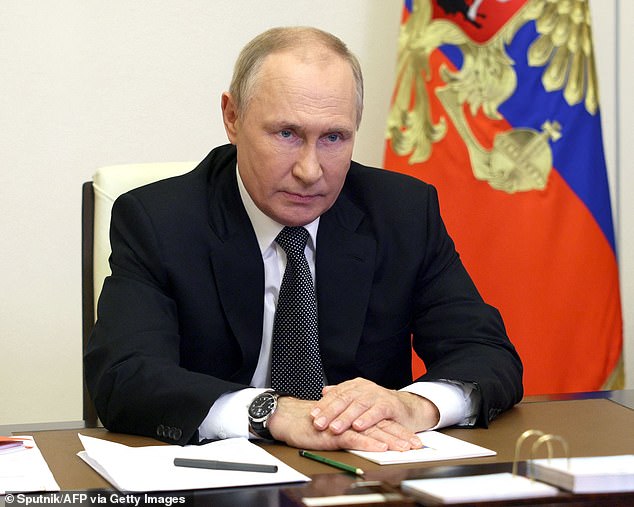 As concerns increase that Vladimir Putin may use a nuclear weapon to demonstrate his might over the Black Sea, he has come under fire for his ‘very reckless’ nuclear language.

Putin said last month that he was prepared to deploy nuclear weapons in the event that it were essential to maintain Russia’s “territorial integrity,” and yesterday, Russia declared that captured Ukrainian regions are now under its nuclear umbrella.

After weeks of humiliating defeats by Ukraine on the battlefield, it is thought that Putin has “few alternatives left,” which has led to an increase in the frequency of the threatening utterances.

Today, Tony Radakin, the Chief of the Defence Staff, asked all nations to stand together in opposition to what he termed Russian President Vladimir Putin’s “very reckless” nuclear rhetoric.

He (Putin) has few remaining alternatives. The nuclear rhetoric is a result,’ he stated in a speech.

The world community must continue to be strong and unified despite the fact that this is worrisome and very reckless.

Defence Secretary Ben Wallace’s Tuesday flight to Washington for urgent discussions with the Pentagon has raised grave worries that the dictator of Russia may launch a “nuclear show of force.”

As the new commander of the Russian military forces, Sergei Suvorikin, often known as “General Armageddon,” carried out a series of missile and drone attacks, a third of Ukraine was left without electricity.

After the assault, Mr. Wallace postponed a meeting with lawmakers and traveled to Washington, DC, to talk about “security issues.”

According to a security insider, “the danger has grown lately.”

Mr. Wallace was in Washington, “having the type of meetings that – beyond comprehension, really – the reality that we’re at a moment when these sort of conversations are essential,” junior defense minister James Heappey told Sky News.

While the spokesperson for Prime Minister Liz Truss said that using nuclear weapons by Russia would have “serious implications,” he also added: “I would steer away from commenting on this as a problem.”

He told reporters: “I believe it would be a mistake to get dragged into conjecture on this instead of concentrating on what we are witnessing take place day by day, which is a mindless and inhumane onslaught on people across Ukraine.”

As authorities started evacuating citizens from the city of Kherson earlier today, Putin proclaimed martial rule in the Ukrainian territories that were under occupation.

He claimed that the order would go into effect at midnight in the regions of Donetsk, Luhansk, Kherson, and Zaporizhzhia, giving him broad authority to restrict civil liberties, repurpose industries, and press Ukrainians into his armed forces to fight their fellow citizens. It is unclear, however, whether he will use all of these powers.

The directive also applies to the seized Crimea as well as the Russian cities of Krasnodar, Belgorod, Bryansk, Voronezh, Kursk, and Rostov, which are all located on Russian soil and border Ukraine.

Shortly after Sergei Surovikin, his new commander in Ukraine, described the situation in Kherson as “tight,” Putin made the announcement.

Evacuations began there today as Vladimir Saldo, the Kremlin’s representative in the area, said that up to 60,000 people will be relocated over the next six days, implying that an assault may occur within a week.

Saldo continued, saying that the government was likewise making progress but pledged that Russia would “fight to the death” to reclaim total power. If Putin’s army is forced to retreat, this would be the most humiliating loss it has ever experienced, increasing concerns about future escalation.