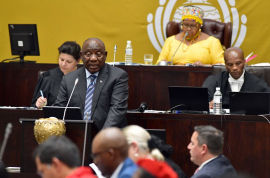 President Cyril Ramaphosa said, using the results of a recent study performed between 2021 and 2022, that despite the increase in the number of individuals getting social grants, food security and household and child hunger remain persistently high.

“Therefore, our interventions to support vulnerable children must be implemented alongside actions to drive inclusive economic growth, investment and job creation, which this administration has taken as a top priority,” said the President.

On Thursday, he responded orally to questions before the National Assembly.

The questions posed by parties represented in Parliament to the First Citizen ranged from the hunger and malnutrition experienced by destitute children to the work done to connect units at the Medupi and Kusile power stations to the national power grid and from the report of the State Capture Commission to the Anti-Gang Unit.

President Ramaphosa stated that nutrition is one of the country’s hurdles to the well-being of its citizens and the growth of its society.

According to statistics, 27% of children under the age of five in South Africa are stunted, which is the result of severe and prolonged malnutrition and occurs when a kid fails to reach the anticipated height for his or her age.

The fight against child poverty is at the top of his agenda, as he regarded it to be an issue that the nation needed to address.

“This is reflected in several social protection interventions that the government has embarked upon to ensure that every child has access to adequate nutrition, decent housing, to free healthcare to education and also childcare.”

The government has increased the Child Support Grant (CSG) throughout the years to assist impoverished and vulnerable children. Currently, more than 13 million children have access to CSG, up from 12.5 million in 2018.

In addition, he said that several study results, such as those undertaken by the United Nations Children’s Fund (UNICEF) and International Labour Organisation (ILO), demonstrate that the CSG decreases child poverty and vulnerability.

Similarly, the Social Assistance Programme was a government initiative similar to the School Nutrition Programme and Community Nutrition and Development Centres, which give nutritious meals to homes in need.

According to the President, 9,6 million students nationwide get free meals, up from 9,1 million in 2018.

In addition, the government has launched the 1000 Days programme to improve the nutrition of pregnant women and infants throughout the first 1000 days of life in order to guarantee that newborns have the greatest possible start in life and attain their full potential.

The effort comprises initiatives for nutrition, education, and awareness.

He said that the Department of Social Development is now developing a maternal support policy in order to provide a state social assistance package for needy pregnant mothers. “Once the policy is finalised, it will be presented for approval by the relevant structures.”

He said that the nation was plagued by poverty, inequality, and unemployment, all of which have a significant part in aggravating hunger and malnutrition.