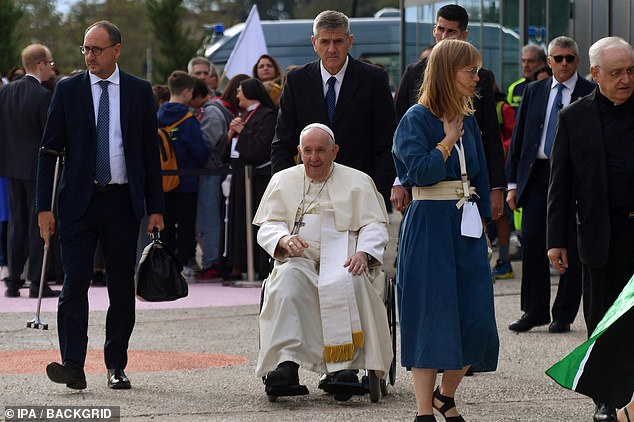 On Saturday, Pope Francis, 85, was seen being pushed in a wheelchair as he traveled to Assisi to urge young people that it was their responsibility to safeguard the earth and alter Earth’s course.

Francis was visiting the birthplace of his namesake, a nature-loving saint, when he urged for ‘courage’ in rejecting fossil fuels and lamented that older generations did not know how to safeguard the earth and ensure peace.

He informed the youth that his aspirations rested on their efforts to save the earth and make the global economy more considerate of the poor.

Concerned observers have pondered for some time whether the old Pope still possesses the vitality to carry out his responsibilities as pontiff.

It is believed that he uses a wheelchair due to a severe knee condition that limits his movement, but he was also said to have undergone colon surgery in July to remove 33cm (13 inches) of intestine.

Because the Pope’s bowels had ‘narrowed,’ the Vatican classified it as a ‘scheduled surgery.’

On a journey to Assisi in central Italy, the Pope was again observed being pushed in a wheelchair.

Francis, 85, is believed to need a wheelchair due to a severe knee condition that limits his movement; nevertheless, he was also claimed to have undergone colon surgery in July to remove 33cm of intestine.

Francis was visiting the birthplace of his namesake, a nature-loving saint, when he urged for “courage” in rejecting fossil fuels and lamented that older generations did not know how to safeguard the environment and ensure peace.

And in August, Francis established the position of Personal Health Assistant to the Holy Father to supplement his existing personal physician.

The appointment of Italian Massimiliano Strappetti was announced by the Holy See in the same month.

During his July journey to Canada, where he apologized for the Catholic Church’s part in removing indigenous children from their homes and placing them with Canadian families, he was always accompanied by a nurse.

During his brief visit to the hill town in central Italy on Saturday, Francis addressed a crowd of approximately one thousand young people, some of whom were young economists. Others are involved in environmental initiatives, including startup companies.

Participants came from throughout the globe. Among them was a woman who told Pope Francis how she and her husband were aided to evacuate Afghanistan during the Taliban’s takeover of the country last year by an organization called The Economy of Francis, which is inspired by the life of St. Francis and his care for the poor and those in need.

The pope stated that a global economy must convey a “new perspective of the environment and the Earth.”

Numerous individuals, corporations, and institutions are undergoing an ecological transition. We must continue on this path and do more,’ urged Francis.

The pope underlined the urgent need to discuss development paradigms.

Pope Francis participates in the Economy of Francesco (EoF) event in central Italy’s Assisi. He told the youth that he pinned his hopes on their efforts to save the earth and make the global economy more considerate of the poor.

Francis stated, “Now is the moment to quit fossil fuels and speed the development of energy options with zero or positive impact.”

He warned the youth, “Our generation has bequeathed you a wonderful inheritance, but we do not know how to safeguard the world and we are not securing peace.”

He bemoaned the absence of “creativity, excitement, and passion” and told the young people, “We thank God that you are here. You will not just be there tomorrow, but you are also present now.’

The Pope’s faith in youth may be bolstered by the atrocities he admits are being committed in Ukraine, as his charity chief who is delivering help in Ukraine was forced to flee and find cover after coming under gunfire last week.

Cardinal Konrad Krajewski, a Pole, was forced to avoid gunfire while on his fourth humanitarian and pastoral journey to Ukraine, together with a Catholic bishop, a Protestant bishop, and a Ukrainian soldier, delivering supplies.

Yesterday, the pope reportedly spoke with Krajewski, who had inspected mass graves of Ukrainians outside Izium, in northeast Ukraine.

Francis stated today, “He (Krajewski) informed me about the suffering of these individuals, the savagery, the horror, and the tortured bodies they discover.

Let us unite with these heroic and martyred individuals.

»Pope Francis, 85, uses wheelchair to exhort youth to save the planet«