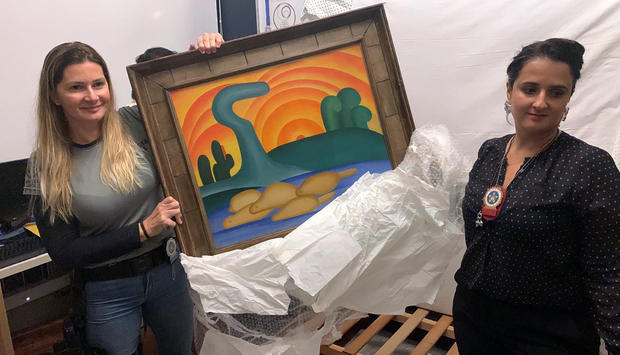 On Wednesday, Rio de Janeiro police sought the arrest of six suspects accused of participating in the theft of 16 artworks valued at more than $139 million, some of which were recovered.

According to a police statement, the group stole the artwork from an 82-year-old widow whose late husband was an art collector and dealer.

The haul included works by Brazilian artists Tarsila do Amaral and Emiliano Di Cavalcanti of museum-quality. Do Amaral’s “Sol Poente” — a painting of a brilliantly hued sunset — was discovered at the bottom of a pile of more than ten paintings that were discovered beneath a bed, as captured on video by the police.

According to the statement, the theft was masterminded by the widow’s daughter. Neither of their identities were provided. Wednesday, the daughter was among those detained, according to local media, which also displayed photos of a lady trying to escape via a window as police arrived.

The artworks were not taken in a robbery, but rather by means of a peculiar hoax. According to the police report, a self-proclaimed “psychic” contacted the widow in the Copacabana area in January 2020 and told her that her daughter was ill and would soon die.

The elderly woman was “convinced to pay exorbitant amounts for the spiritual treatment of her daughter,” police said.

The widow, who has mystical beliefs, was forced to make bank payments totalling 5 million reais over a two-week period for alleged spiritual therapy. Her daughter, who supported the payments, fired the housekeepers so that her accomplices could enter the home undisturbed and steal the artwork. The widow made more bank transactions after getting threats from her daughter and the accomplices.

An art gallery in Sao Paulo retrieved three artworks with a combined value of nearly 300 million reais. According to the complaint, the gallery owner informed police he acquired them directly from the widow’s daughter and sold two others to the Museum of Latin American Art in Buenos Aires.

The world-renowned museum’s founder, Eduardo Costantini, acquired the pieces for his personal collection and possibly future exhibition at the museum, according to a press officer for the institution. The museum identified the widow as Genevieve Boghici and said that Costantini had kept direct communication with her since acquiring the artworks.