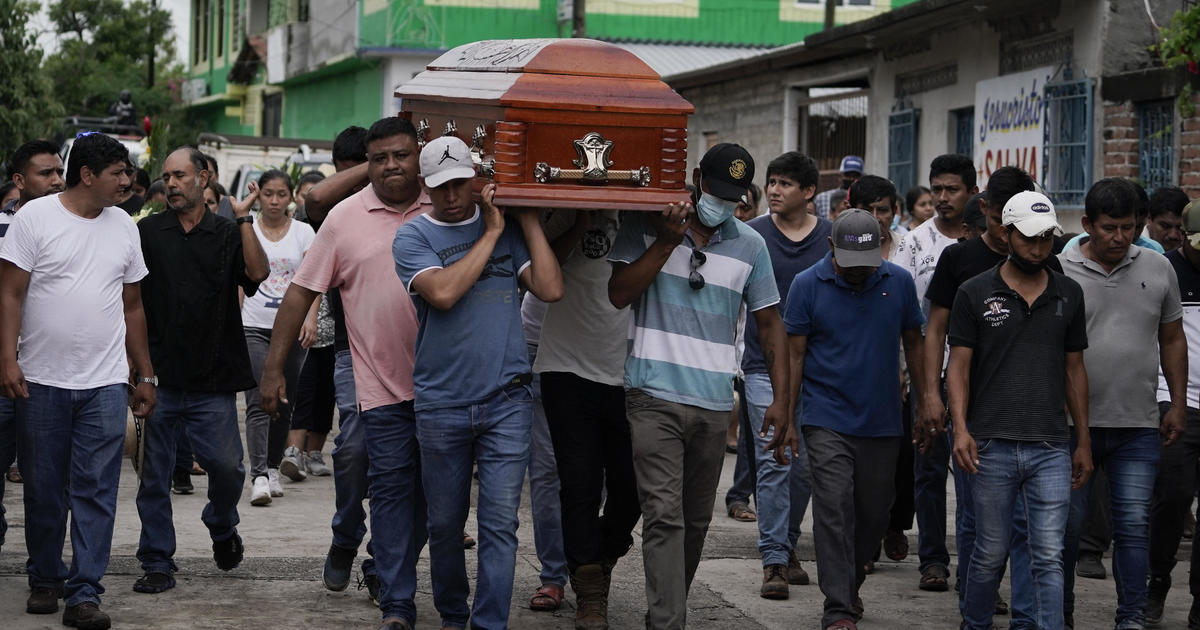 Authorities reported on Thursday that the slaughter of 20 townspeople in southern Mexico looks to be the act of a drug lord who attempted to blame a rival gang via social media.

Mexico’s assistant secretary of public safety, Ricardo Mejia, announced on Thursday that five houses belonging to the Hurtado brothers, who operate as the Familia Michoacana cartel, had been raided. These raids uncovered ranches, mansions, and a menagerie of tigers, zebras, antelopes, and other wild creatures.

Wilmer Rojas was murdered in a mass shooting in San Miguel Totolapan, Mexico, on Wednesday, October 5, 2022. On Thursday, October 6, 2022, residents of San Miguel Totolapan carried his coffin. Thursday, officials reported that a narcotics gang stormed a town hall meeting and murdered 20 people, including the mayor and his father. Eduardo Verdugo / AP

The Tequileros harassed the town for years, but they were driven out by a vigilante force said to have been sponsored by the dominant Familia Michoacana.

José Alfredo Hurtado, also known as “The Strawberry,” and his brother Johnny are the leaders of the Familia Michoacana. Several days later, Hurtado posted a video in which he claimed he was the intended victim of the gunshot and had narrowly survived.

“The attack was intended at me,” Hurtado said, recounting the incident in which gunmen entered the town and opened fire on a meeting between the mayor and other authorities. The shooters were presumably members of a vigilante group.

However, Mejia stated on Thursday that the capo’s own gang was likely responsible for their deaths.

“According to a serious line of inquiry, they carried out the mass execution and attempted to make it appear as if another organization was responsible,” Mejia added.

Local media said that the Hurtado brothers may have been furious because the mayor of Totolapan and the vigilante group he allegedly led rejected the capos’ pick for the town’s leadership.

A gang of armed men claimed to be the Tequileros and said they were retaking control of Totolapan, which is in the highlands where the majority of Mexico’s opium poppy crop is grown, in a video released hours after the 5 October shootings.

With poor lighting and audio, the Tequileros film stood in contrast to the slickly produced cartel recordings that have become the norm, in which well-armed groups of masked cartel gunmen routinely threaten competitors and authorities, and claim or deny responsibility for homicides. It now appears that the Tequileros film was a hoax.

Hurtado, whose moniker “The Strawberry” is slang in Mexico for someone with costly tastes, appeared in his own film a few days later wearing a Gucci T-shirt and a timepiece that appeared to be pricey.

Hurtado stated that he had intended to attend the meeting where Mayor Conrado Mendoza and his father, a former mayor, were assassinated, but that the shooters started fire before he descended from his bulletproof car, allowing him to escape with his life.

He said that he and the deceased mayor had worked together in the past to combat the Tequileros gang, stating, “The mayor and I began this effort together.”

“We arranged this meeting with the mayor, his father, and the peace organization they have,” he stated, alluding to an active vigilante group in Totolapan.

In Mexico, villages under the control of one cartel frequently form vigilante organizations and appeal to competing cartels for assistance in combating their oppressors. In Mexico, cartels generate the majority of their income by extorting protection money from local farmers and businesspeople.

Totolapan villagers are so fed up with Tequileros kidnappings in 2016 that they kidnapped the gang leader’s mother to secure the release of others.

The increased usage of the synthetic opioid fentanyl has decreased the demand for opium paste and reduced the degree of violence in Guerrero, where the Tequileros had long relied on the trafficking of opium paste from local poppy producers.

The Tequileros gang is a branch of the formidable Jalisco Nueva Generacion drug cartel. According to the Department of Justice, the Jalisco cartel is “one of the five most dangerous transnational criminal organizations in the world.” The boss of the cartel, “El Mencho” Nemesio Oseguera, is among the most sought after by Mexican and American authorities.