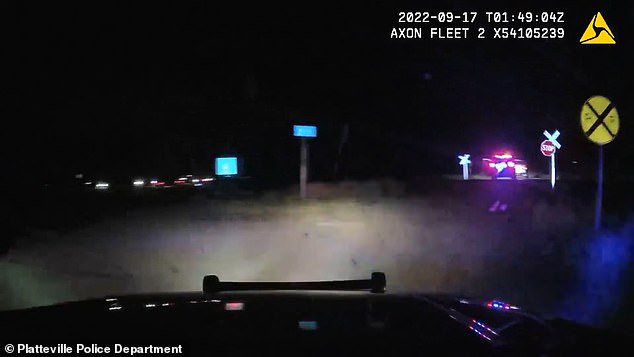 The arresting officer left the police patrol car parked in the middle of the railroad tracks, and the female suspect is fortunate to be alive when it was hit by a train.

The Platteville Police had stopped Yareni Rios-Gonzalez, 20, of Greeley, Colorado, close to Denver, in relation to a road rage incident that happened last week and featured a pistol.

Officers stopped her at a railroad crossing after seeing her white pickup vehicle.

At the point of a pistol, Rios-Gonzalez was forced out of her car and forced to kneel as police officers handcuffed her and took her into custody.

After that, she was forced to sit in the back of a police cruiser while cops performed different inspections while seeming to be unaware of their hazardous situation.

More over five minutes later, the cops could be seen speaking with a female suspect while seeming completely unconcerned about their exceedingly risky parking situation.

A railroad train’s horn and lights can be heard ominously in the distance.

A police officer can be heard yelling, “Move your vehicle, keep back!” seconds later to a fellow cop.

However, there was barely time to respond before the train slammed into the police SUV, sending Rios-Gonzalez inside speeding down the tracks.

Despite having nine shattered ribs, a broken arm, a fractured sternum, and multiple missing teeth as a result of the tragedy, the mother of one somehow lived.

Officers stopped Rios-Gonzalez in relation to a road rage incident in which a weapon was deployed, according to the explanation provided by the investigators.

Police have put the officer whose patrol vehicle was struck by a train on administrative leave until an investigation is conducted.

Why would you park on train lines is the main question. Wilkinson told Fox 31 that it was just carelessness, severe negligence, and recklessness.