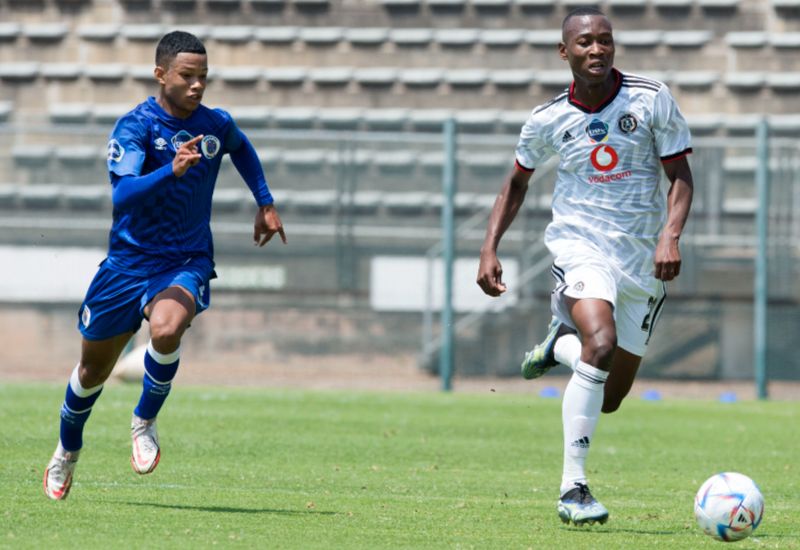 After registering just one point in their previous two matches, the Bucs Reserves made several lineup adjustments, with Zeke May making his first start at this level in place of Ndumiso Ngiba, and Gomolemo Khoto, Mohau Nkota, and Relebohile Ratomo being deployed up front upon their return to the starting XI.

The majority of the game’s opening exchanges were characterized by tenacious defence on both sides, with most of the action occurring in the middle of the field.

It took nine minutes plus a moment of brilliance for the decisive moment to occur, which was delivered by Nkota, who scored the game’s first goal from just beyond the penalty area, leaving United goalie Samkelo Xulu helpless.

Despite holding the lead, the visitors maintained their intensity, with midfielder Njabulo Mndebele establishing strong connections with the attacking duo of Nkota and Ratomo.

United attacked with a corner kick in the 29th minute, forcing Bucs goalkeeper Allesandro Du Plessis to make a spectacular save to preserve the advantage.

SuperSport United went on the offensive late in the first half in quest of an equalizer, but Pirates did have a few minutes of their own inside the opposition’s half, where Nkota continued to pepper Xulu with long-range attempts in pursuit of his second goal.

In the 50th minute, United’s period of dominance was briefly interrupted by a close call at the other end as Nkota combined with Khoto, whose shot was cleared off the line after being blocked.

Siyabonga Ndlozi was penalized for handling the ball within the penalty area, presenting the home team with a golden opportunity to tie the score seven minutes later, which they took advantage of to tie the game 1-1.

The Soweto Giants were kept busy at the back, as the new central-defensive pairing of Spandiel and May kept the hosts at bay, while Jabulani Mokone, who was added after the hour mark, attempted to make things happen on his rare foray into the United half.

The right winger nearly made a decisive contribution late in the game as he made a beautiful move down the flank before seeking for Nkota in the middle, but the defense made a quick clearance.

When the final whistle blew, the Pirates Reserves were forced to settle for a point for the second consecutive week as the score remained 1-1.