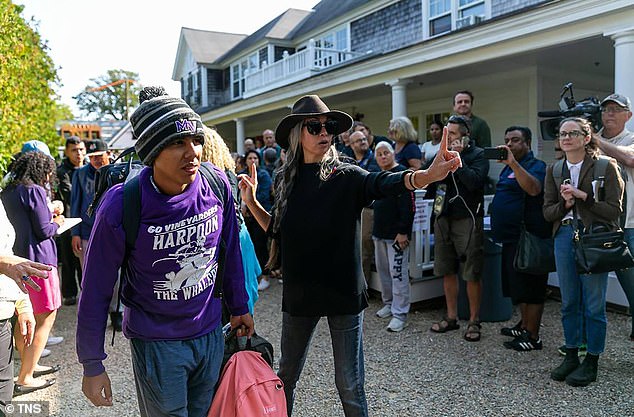 Nancy Pelosi questioned why Governor Ron DeSantis is flying migrants to Democratic areas, asserting that Florida farmers require immigrants to “harvest the crops down there.”

A few weeks after DeSantis’s stunt of bringing 50 migrants to the affluent Massachusetts island of Martha’s Vineyard, the House Speaker drew a confused analogy during a press conference on Friday.

Pelosi stated, as a justification for the need for immigration reform, that there is a labor shortage in the United States.

Even in Florida, some farmers and growers ask, “Why are you transporting these immigrants to the north?” We need them to harvest the crops here,” she asserted.

The California Democrat continued, ‘But that doesn’t mean we don’t understand our moral responsibility as well.’

A class action lawsuit was launched against DeSantis following his flight of migrants, alleging that he misled those who boarded into believing that their destinations were different.

This month, another flight funded by DeSantis was due to land in Delaware, the home state of President Joe Biden, but it never came.

In reaction to what Democrats call a ‘political spectacle,’ Congress is also considering opening investigations into the Florida governor.

Pelosi’s remarks also come after months of migrant buses from Texas and Arizona disembarking in Washington, D.C., New York City, and Chicago – areas that refuse to cooperate with federal immigration authorities and are considered sanctuary towns.

The governors of these Republican-led states claim they wish to bring the immigration crisis to the attention of the nation’s decision-makers and distribute funds to border communities to alleviate the strain caused by the inflow of migrants.

Customs and Border Protection (CBP) statistics indicate that they have seen more than 2 million migrants since October 2021, with only one month of reporting remaining until the end of the fiscal year.

The remarks came after DeSantis transported 50 migrants to the posh island of Martha’s Vineyard in Massachusetts earlier this month.

In addition to the record-breaking number, more migrants have perished this year than in any other year when illegally crossing the southern border into the United States.

Pelosi stated, “We have a responsibility to safeguard our border.” We also have a duty to appreciate the significance of newcomers to our country.

‘Right now, comprehensive immigration reform is the best thing we can do for our economy,’ she continued.

While the focus was already on DeSantis for sending migrants north, it shifted to the Sunshine State this week when it was struck by Hurricane Ian, a category four storm, on Wednesday.

As of Friday morning, a minimum of 23 deaths have been confirmed.