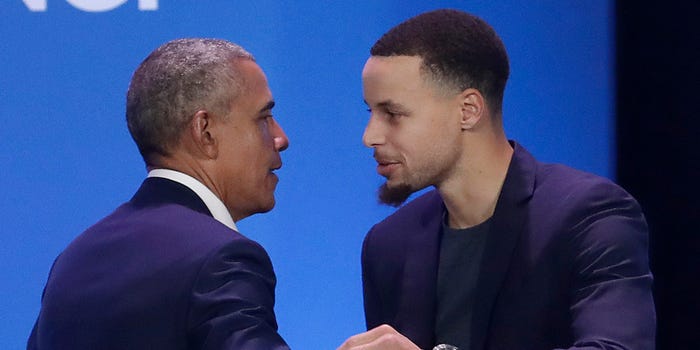 Stephen Curry of the Golden State Warriors needed to learn a lesson on influence from former US President Barack Obama.

Curry was reprimanded by Obama in 2018 for saying on a podcast that the moon landing was a hoax, according to Matt Sullivan of Rolling Stone.

Curry questioned if humans had ever visited the moon on the “Wingin It” podcast in 2018, along with NBA stars Vince Carter, Kent Bazemore, and Andre Iguodala. Curry concurred when the other players voiced their scepticism and said, “I don’t think so, either.”

The remarks drew outrage, and NASA even issued a statement in which it provided Curry with proof that people had visited the moon.

Curry revealed to Sullivan that Obama sent him a “stern” and “direct” email, chastising the star point guard for using his platform carelessly. Obama said that humans had visited the moon and urged Curry to take action to make things right.

Curry eventually issued a statement clarifying that he was kidding. Additionally, he hosted a 15-minute educational live session with an astronaut on Instagram.

Additionally, Curry had special edition Under Armour shoes with a space motif produced, which he subsequently auctioned off to benefit STEM initiatives in the Bay Area. For almost $58,000, they were sold.

Curry and Obama are good friends, so Curry didn’t find the gravity of Obama’s message offensive.

You won’t believe what the aliens look like, Obama told Curry when they were playing golf, according to Sullivan, who claims that Obama has even made jokes about top-secret information that presidents have access to.