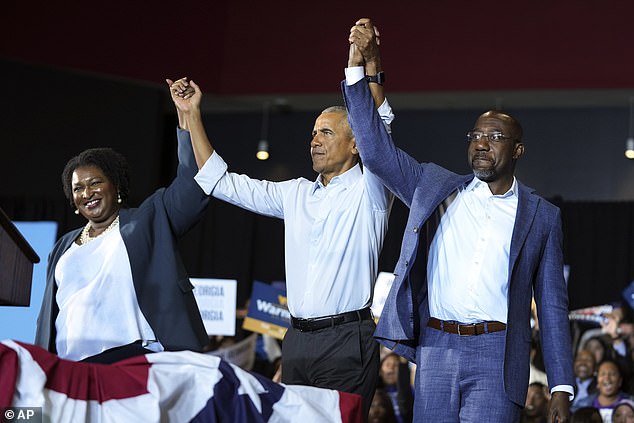 Former President Barack Obama returned to the campaign trail on a Friday evening outside of Atlanta, where he blasted Republicans for remaining loyal to former President Donald Trump and their selection of Herschel Walker for the Georgia Senate.

At the Gateway Center Arena in College Park, Georgia, the former president stated, “Virtually every Republican candidate appears consumed with two things: owning the libs and winning Donald Trump’s support.” It’s not difficult. And, at least in my opinion, it lacks inspiration.’

Obama was tasked with bolstering the campaigns of Democratic candidates Raphael Warnock, who is in a close race against Walker, and Stacey Abrams, who is lagging incumbent Republican Governor Brian Kemp.

He took special pleasure in attacking Walker, a former Georgia and NFL football player who has weathered a number of scandals, including allegations that he paid for his ex-girlfriends’ abortions.

Obama noted that Walker has shown little enthusiasm in public service, volunteerism, or helping others.

Obama stated, “It appears to me that he is a celebrity who aspires to be a politician.” ‘And we’ve seen how that goes. This is nothing new,’ he replied, laughing.

Obama was also referred to be a “celebrity” by his 2008 opponent for the White House, the late Sen. John McCain.

Obama stated, “There are a great number of young folks in this room.” Some of you may have forgotten, but Herschel Walker was an outstanding football player.

But the question is, does this make him the best candidate to represent you in the United States Senate? Does this qualify him to weigh in on crucial issues regarding our economy, foreign policy, and future?’

Obama then invited the audience to participate with him in a “thought exercise.”

Let’s imagine you’re at the airport and you spot Mr. Walker and you exclaim, “Hey, there’s Herschel Walker, the Heisman Trophy winner! Let’s have him pilot the plane!” Obama stated. “You would probably not say that. You would undoubtedly want to know, ‘Can he fly an airplane?’

Obama presented the same concept in a hospital.

Obama stated with a chuckle, “That Walker man could certainly dismember him at Sanford Stadium if he had a scalpel.”

Obama continued, “And by the way, the inverse is also true: you may have liked me as president, but you would not want me starting at tailback for the Dogs.” Can you imagine my slow, skinny rear end getting hit by a 300-pound defensive tackle? No, I can’t. You’d have to drag me off the field.

Obama and Warnock also referenced Walker’s memorable moment during the debate, when he displayed a fake police badge to demonstrate his support for law enforcement.

Obama pondered, in response to the question of which Georgia Senate candidate would keep families safe, “Is it someone who carries a fake badge and claims to be law enforcement?”

Both Obama and Warnock advocated that Walker was a liar.

“He literally wears his lies as a badge of honor,” said Warnock.

Obama argued, on a broader scale, that voters should give President Joe Biden and the Democrats a pass on inflation and crime, two issues that Republicans have used to their advantage.

A local radio DJ warmed up the crowd with oldies, hip-hop, and go-go beats, and audience members were asked to raise their hands if they attended historically black colleges and universities (HBCUs).

Georgia is the state where we are experiencing a decline. It’s hard to think they’ll go after Herschel Walker,’ Schumer said to Biden on a Syracuse airport tarmac on Thursday.

Walker, a Trump-backed Republican and former University of Georgia and NFL star, faces Warnock, a Democrat and senior pastor at Atlanta’s Ebenezer Baptist Church, who won his seat in a special election and a subsequent runoff in January 2021.

FiveThirtyEight.com gives Walker a 52 percent likelihood of victory, while Warnock has a 48 percent chance of victory.

Walker’s campaign has been dogged by reports that he asked former girlfriends to seek abortions, despite his pro-life stance; yet, his dramatic personal life has not greatly impacted his standing in the polls.

Abrams is involved in a rematch with Republican Governor Brian Kemp from 2018.

Kemp has drawn independents, with Rasmussen giving him a 17-point lead over Abrams among unaffiliated voters, according to a Thursday survey. Kemp has maintained GOP support despite criticizing President Trump over Georgia’s 2020 election result.

After Atlanta, Obama will fly to Michigan and Wisconsin on Saturday then Nevada and Pennsylvania the next week.

The former president will campaign alongside the Democratic candidate for governor of Michigan, who is being challenged by the Republican Tudor Dixon.

Then, he will attempt to assist Wisconsin Democratic Senate candidate Mandela Barnes, who lost the lead in his race against incumbent Republican Senator Ron Johnson.

Obama is set to reconnect with Biden, who served as his vice president, in Pennsylvania in order to assist Lt. Gov. John Fetterman, who is competing for the state’s open Senate seat after a difficult debate performance.

Obama will also campaign for Democratic gubernatorial candidate Josh Shapiro, who, according to polls, enjoys a commanding lead over Republican Doug Mastriano.

This time around, there is no obvious bogeyman, as Obama will be tasked with highlighting Democratic achievements in the face of rising inflation and crime, two issues that Republicans have used to their advantage.

President Obama is always the tie that binds the Democratic coalition together: college-educated voters, women, suburban voters, and African-American voters. In an environment where voter turnout and enthusiasm are paramount, surrogates like President Obama are invaluable on the campaign trail,’ explained Hillary Clinton’s 2016 campaign senior strategist Joel Payne.

And Obama is aware of how difficult midterm elections can be for the president’s party, as he referred to his own 2010 defeat as a “shellacking.”

In that year, Democrats lost 63 House seats and six Senate seats, resulting in a successful Republican takeover of the House.

During Obama’s second term, the Democrats lost control of the Senate in the 2014 midterm elections.

In a midterm rebuke of Trump, the Democrats regained control of the House in 2018 and the Senate after Warnock and fellow Georgia Democrat Sen. Jon Ossoff won their run-off races on January 5, 2021.