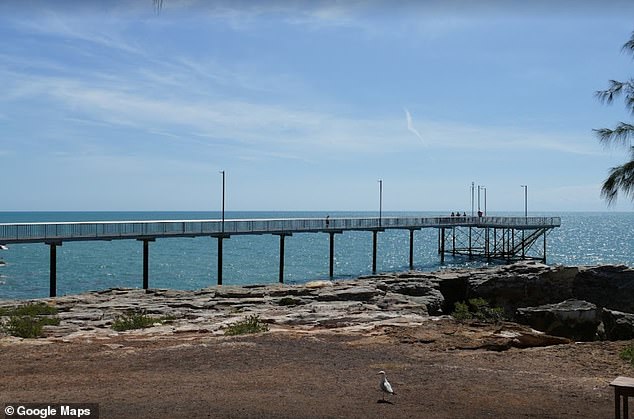 An enormous saltwater crocodile pursued a man at a famous beach, and police managed to save his life.

The beachgoer went swimming at Nightcliff Jetty in the Northern Territory on Friday night, and when he surfaced on a rock bar, he was confronted by an adult crocodile.

Around 7:30 p.m., police were hurriedly summoned to the location due to claims that the large predator was stalking a man.

According to Northern Watch Commander Mick Fields, the man was unable to return to shore because the crocodile was impeding his path, according to NT News.

He claimed, “A pretty huge curious adult crocodile that was pursuing him blocked this escape attempt.”

Officers were able to remove the man from the rock bar and rescue him.

Commander Fields stated, “Water Police personnel were sent and were able to save the frightened individual from becoming meal.”

The man informed police that he had gone out to the rock bar at low tide with the expectation that he could return to the land when the water rose.

The public was advised by Commander Fields to use care before entering the water.

‘Fortunately, on this occasion, a problem was barely averted thanks to the prompt reaction of Police personnel,’ he added.

In the region, crocodiles are often seen.