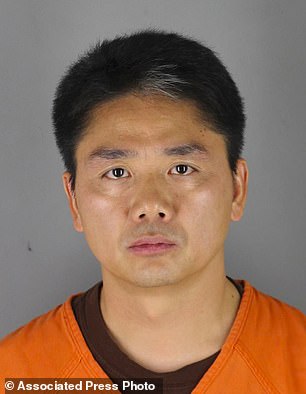 Attorneys for both sides said over the weekend that Chinese billionaire Richard Liu would not be charged with the alleged rape of a Minnesota college student after striking an undisclosed deal to dismiss the explosive case.

Following her back to her Minneapolis apartment in 2018, Jingyao Liu, 25, accused Liu, a well-known online entrepreneur from China who established ecommerce giant JD.com, of raping her.

The alleged encounter allegedly took place after the two people involved went to a drunken dinner with affluent Chinese businessmen where Jingyao Liu, a 21-year-old senior who was in charge of keeping the employees entertained, was the lone female.

After the meal, Liu, who was then in his mid-40s, allegedly forced himself onto her in his car before raping her later that night at her apartment.

In light of growing government inspection of China’s technology industry, Liu, the CEO of his $77 billion Beijing-based business, resigned this year. He had previously denied raping the lady, who chose not to press charges.

But in a joint statement issued Saturday evening, the attorneys for both parties described the encounter—part of which was captured on the security cameras of the apartment building—as “a misunderstanding that has consumed substantial public attention and brought profound suffering to the parties and their families.”

Just two days before the civil trial was scheduled to begin in court on Monday, with a jury of seven men and five women chosen to preside over the now-cancelled hearing, a settlement was reached.

The statement issued late Saturday says, “The incident between Ms. Jingyao Liu and Mr. Richard Liu in Minnesota in 2018 resulted in a misunderstanding that has consumed significant public attention and caused tremendous grief to the parties and their families.”

To prevent future hardship brought on by the litigation, the parties “decided today to lay aside their disagreements and resolve their legal battle.”

In one of several actions Liu, 48, took to separate himself from the firm he established in the wake of the four-year investigation, he cashed out roughly $1 billion from JD.com in June.

According to estimates, Liu is worth $10.9 billion.

When Liu, who has a wife in China, was in Minneapolis for a week-long residence as part of the University of Minnesota’s doctor of business administration China program in 2018, Jingyao, a Chinese national, said the assault took place.

Jingyao, who was a student at the university at the time and was a volunteer in the program, had been targeted at high-level Chinese businesspeople.

Jingyao said Liu raped her at her apartment after forcing himself onto her in his car during a meeting with Liu and other JD.com officials in April.

Liu, also known as Liu Qiangdong in his home China, was detained on suspicion of criminal rape four months later.

Prosecutors at the time refused to bring charges because of the case’s “deep evidentiary issues.”

The next year, Jingyao Liu would file a lawsuit against Liu and JD.com for more than $50,000 in damages, claiming sexual assault and violence as well as wrongful detention.

The #MeToo movement was becoming more well-known in China at the time the issue gained notoriety, and both Liu’s fans and detractors engaged in strong public relations operations on Chinese social media.

After that, accounts calling for Jingyao’s support were deleted or blocked, which increased public resentment over the situation.

At the time, Beijing said that the accounts were blocked by censors for “violating rules.”

The story then circulated around the US, where it picked even more momentum.

But in China, Jingyao faced ruthless criticism and was called a “slut” and a “whore” for daring to claim that the entrepreneur had assaulted her.

Both Lius are seen in surveillance camera images and video from the alleged assault night entering the victim’s apartment building after the intoxicated executives meeting, which was also captured on camera.

After alleging in her complaint that she had to withdraw from school in the autumn of 2018 and seek therapy and treatment, the young lady has subsequently claimed that she now sleeps with pepper spray and a stun gun on the side of her bed.

She has since graduated, but according to her attorney, she is now dealing with severe post-traumatic stress disorder.

At that time, a Liu attorney gave American media outlets access to the whole, unedited CCTV footage from a restaurant and an apartment building, claiming it offers a different narrative of what happened.

In the meanwhile, Jingyao Liu also supplied her supporters surveillance footage, which they later edited and put online to show their support for the lady.

The identity of the person who uploaded the films in the beginning remains unknown. The ‘Minnesota Events’ account claimed to be ‘exposing’ Jingyao Liu’s ‘intimate way’ by seemingly inviting Richard Liu into her residence.

Some online critics criticized Jingyao Liu when the initial surveillance films were published, claiming they showed she had been a willing participant.

The legal team defending Jingyao Liu said that the tapes corroborate her statements to law enforcement and the claims made in her complaint. What transpired at her apartment or in her vehicle, which are at the heart of her accusations, are not shown on the tapes.

Wil Florin, a lawyer representing the accused, said that “an unfinished footage and the silence of WeChat supporters would not prevent a Minnesota jury from hearing the truth.”

Jingyao, who chose to publicly identify herself and make the accusations, said she had developed into a victim of constant bullying ever since she decided to file the lawsuit in an interview with The New York Times at the time.

She also expressed sorrow for how she handled calling the police to report the event.

When Jingyao first met Liu, she was enrolled in a program for the school’s Carlson School of Management, and part of her duties included bringing Liu and other executives—many of whom worked for JD.com—jogging every morning.

She was asked to join the guys for dinner at the Japanese restaurant Origami Uptown on the last night of the trip, when the millionaire purchased everything on the menu for the party of 24.

She claimed in her complaint that when they arrived at one of the executive’s residences but she objected to going inside, Qiangdong dragged her back into the vehicle and drove to her apartment.

When they finally entered the building, they were shown on surveillance tape having trouble locating her unit.

They strolled together to her flat, when she says he allegedly assaulted her.

Then he went. When she described what had occurred to a male acquaintance, the buddy made a police call.

She was demonized in the media when the police decided not to prosecute charges and she filed her case.

I was reluctant to call the cops in the first place because I anticipated this outcome.

“People would see me and comment, “Her tale has much too many gaps in it. She claimed to be inebriated, but the film clearly didn’t capture that.”

She said, “But I didn’t state that I was so completely inebriated that I couldn’t move.”

She said that in China, people call her a “slut” and humiliate her on purpose.

When I couldn’t locate my unit in the complex, they claimed that I was acting.

But if I were a true gold digger, why would I need a guy to search the building for my door for 15 minutes? Why I would drive a guy home in the middle of the night was questioned. But Richard Liu was there, and that was my house!

Who would have believed he would act in that manner, she asked.

She first said, “Of course not,” when asked whether she believed she was comparable to Monica Lewinsky. Never in my free will would I sleep with a married guy.

Although she said Lewinsky was braver than she was, she acknowledged parallels between them when she learnt about Lewinsky’s continuing effort to end the kind of cyberbullying they both claim to have experienced.

“We’re so alike!” I have the utmost respect for her for continuing to have a happy life in spite of everything. Extraordinary!

She said, “I’m such a loser that I don’t even dare read the police report.”

Liu is wed to a Chinese celebrity, and the two of them have two kids. They are not related, the two Lius.

His lawyers have often said in remarks that the encounter was consensual intercourse and that the CCTV film demonstrates it.

The incident marked the start of the #MeToo crisis in the Chinese corporate community.

Since then, despite ongoing censorship measures, support for sexual assault victims in China has grown significantly.

Along with the aforementioned complaint, he was one of many prominent Chinese tech entrepreneurs who stepped aside from managing day-to-day operations at their businesses in the midst of a harsh regulatory crackdown that began in late 2020.

In relation to the alleged event, Liu was not charged.