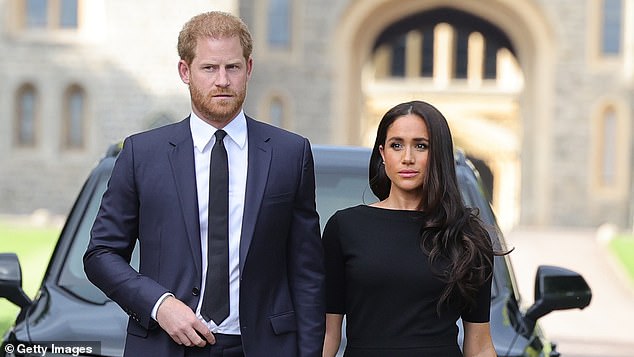 A new book alleges that Prince Harry diagnosed his royal staff with “palace syndrome” because he felt they weren’t doing enough to protect him from the media.

Valentine Low, a royal writer for the Times of London, said in his book “Courtiers: The Hidden Power Behind the Crown” that the Duke of Sussex’s suspicion of the media began to impair his relationships with his closest advisors.

Prior to his relationship with Meghan Markle, according to Low, the prince’s irritation with the media led to tensions with his staff at Kensington Palace. Prior to October 2018, when they announced the formation of their own royal household, Harry and Meghan were part of the royal household, which also cared for Prince William and Kate Middleton.

The Duke of Sussex’s representatives did not immediately respond to Insider’s request for comment.

Low featured comments from an anonymous source who stated that Harry would use the term “the palace syndrome” to describe staff workers who refused to fight the battles he desired with the press. According to the source, he perceived staff members who did not intervene on his side as institutionalized.

On September 6, 2022, Prince Harry speaks during a news conference during the 2023 Invictus Games in Dusseldorf, Germany.

Chris Jackson/Getty Images for the 2023 Invictus Games in Düsseldorf

“Submitting to the media was a crucial indicator of whether or not you had developed it. It was a constant test of allegiance for the group battling in all these engagements. “Are you going to safeguard me? Or have you become one of those individuals who will not fight for me? It was tiresome,’ “The informant informed Low,

The prince has openly criticized the media for years. In November 2021, he talked at the RE:WIRED virtual conference hosted by WIRED about his belief that media in the United Kingdom spread misinformation.

“I learned at a very young age that the incentives of publication are not always aligned with the motivations of the truth,” he remarked. “My experience with the British press is more pre-social media, as they tragically confuse profit with purpose and news with entertainment.”

“They do not report the news; instead, they make it,” Harry continued. They are successful in transforming fact-based news into opinion-based gossip that has terrible effects on the nation.

Earlier in the same chapter, Low reports an anonymous source as saying that when the prince was frustrated with how his staff handled the press, he would text them at all hours of the day to vent his anger.

“Particularly on tours, he took everything he did very seriously… But the necessity for conflict existed the entire time “The source informed Low, It was nonstop texting and messaging throughout the entire night.

The Duke and Duchess of Sussex were captured on camera at the 2019 Trooping the Colour.

However, the revelations regarding Harry’s relationship with his royal employees ahead to his and Meghan’s departure from royal life in 2020 follow rumors that the couple suspected palace workers of leaking tales about them to the press.

Some of the Duchess of Sussex’s closest friends, according to “Finding Freedom,” a 2020 royal biography by Omid Scobie and Carolyn Durand, believed that someone inside the palace was leaking stories to the press when, for example, it was reported that Meghan made Kate Middleton cry before her wedding.

Meghan later said to Oprah Winfrey during their March 2020 sit-down interview that Kate was the one who made her weep.

According to an excerpt from “Finding Freedom” posted by The Guardian, an unnamed acquaintance of the couple stated that there were only a “handful of people working at the palace they could trust.”