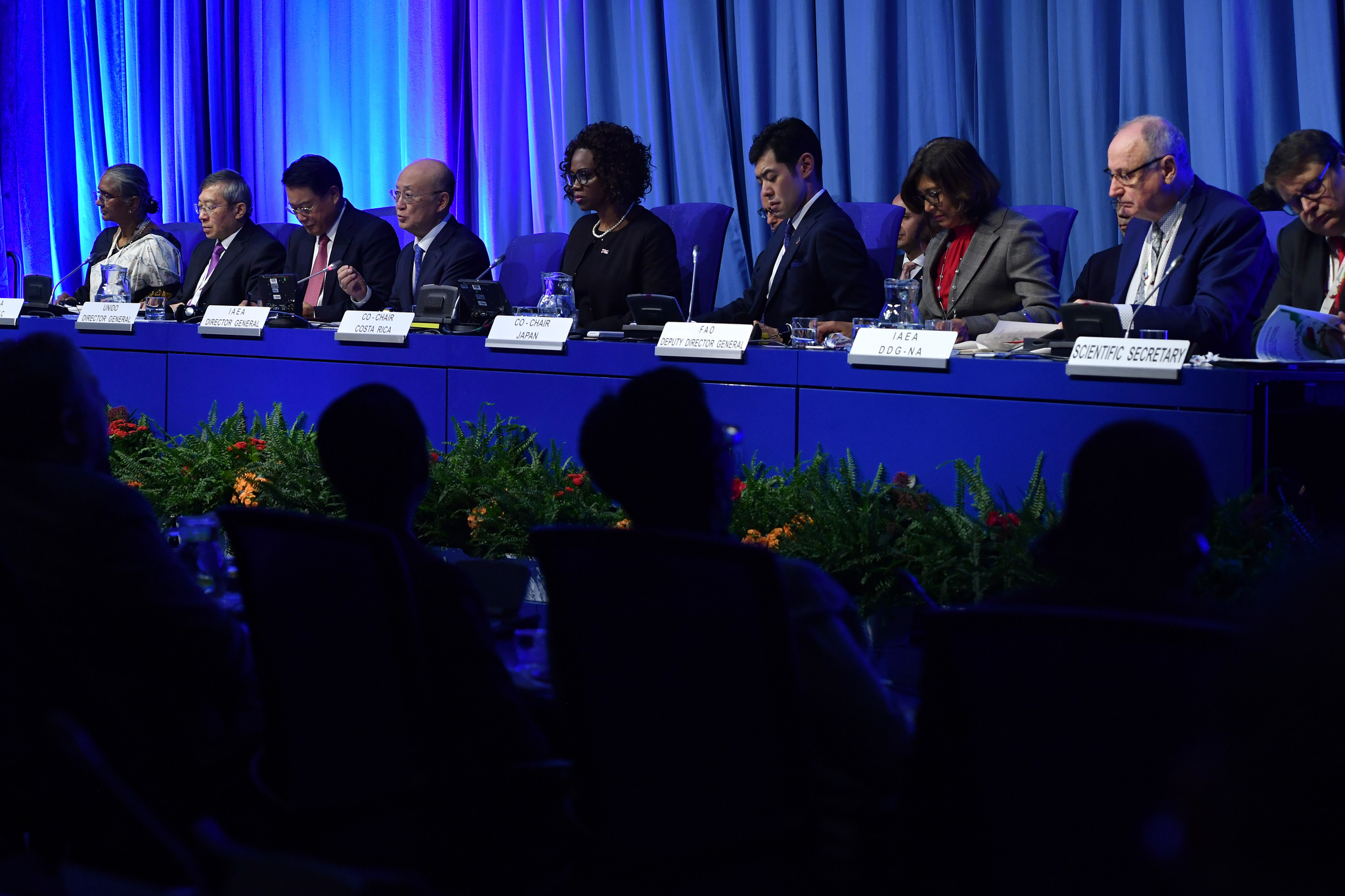 Madam President,
It is an honor to be present today. The United Kingdom thanks the Director General of the International Atomic Energy Agency and Secretary Granholm for hosting this important event on behalf of His Majesty’s Government.
The underpinning for economic growth and prosperity, Madam President, is a reliable and inexpensive energy supply. As the current crisis indicates, economies lacking energy security are less resilient and more susceptible to abrupt shocks influencing global energy markets. The United Kingdom was the first country to harness the reliability of civil nuclear energy to power our homes and companies sixty years ago. We placed nuclear power at the center of our Energy Security Strategy earlier this year, with the goal of delivering 24 gigawatts of nuclear energy by 2050.
The United Kingdom is devoted to nuclear power not only because its energy supply is stable, but also because it is carbon-free. I am proud of the United Kingdom’s leadership at COP26, where we prioritized nuclear energy and its role to attaining net zero. Next month, it will be featured again at COP27 in the UK Pavilion. The United Kingdom commends the Director General and the IAEA for their dedication to advancing the tremendous potential of nuclear technologies and their role in promoting nuclear energy.
However, it would be a grave error to disregard the situation at Europe’s greatest nuclear power plant, Madame President.
The United Kingdom continues to condemn the illegal invasion of Ukraine by the Russian Federation and its heinous attacks against nuclear facilities. This includes the Zaporizhzhya Nuclear Power Plant, where every week the Russian occupying forces flout fundamental nuclear safety and security norms, endangering the safety of millions. Their illegal and irresponsible behavior includes the maltreatment and mistreatment of the Ukrainian workers operating at the site, which increases the possibility of human error in a future nuclear event.
The only way to guarantee the safety and security of Ukraine’s nuclear facilities is for the Russian Federation to halt its unjustified invasion and unconditionally withdraw all of its troops and staff from both Ukraine’s nuclear facilities and its internationally recognized borders.
I thank the Director General, his team, and the Ukrainian employees for their courage and tenacity in promoting nuclear safety and security in Ukraine.
Additionally, we must acknowledge, Madam President, that it is of the utmost importance for the world community to collaborate in order to reinforce our nuclear safety regimes. The United Kingdom acknowledges the International Atomic Energy Agency’s global leadership in nuclear energy and continues committed to supporting these efforts.
The United Kingdom will continue to work closely with the International Atomic Energy Agency to ensure that the robust and effective standards that underpin the use of nuclear energy and nuclear technologies continue to benefit all IAEA member states.
A reliable and secure nuclear fuel supply will also be essential for the successful deployment of new nuclear projects. The United Kingdom is dedicated to collaborating with like-minded and dependable international partners to ensure the supply of nuclear fuel, so enabling the use of nuclear power to promote energy security. In order to facilitate this, we are investing in our nuclear fuel supply chain and enhancing our decades-long knowledge to support present and future nuclear fuel technologies.
For Nuclear Energy to flourish, Madame President, we must cultivate an atmosphere that enables us to exploit its potential. Safety, standards, and supply security are of the utmost significance. And investment is also important. Great British Nuclear will be the United Kingdom’s premier nuclear energy delivery mechanism. It will collaborate closely with the nuclear sector to assist projects at every stage of the development process, enabling a robust pipeline of new construction projects, including megawatt- and gigawatt-scale reactors.
We must also ensure that innovative regulation inspires investor confidence. This is why the United Kingdom approved The Nuclear Energy Financing Act in March of this year. This introduces a new funding mechanism based on the Regulated Asset Base (RAB) as an option for financing small, big, and advanced nuclear projects. This paradigm has fostered the construction of large-scale infrastructure with great success, and we are certain that it will do the same for future nuclear projects.
We cannot lose sight of the opportunities that Advanced Nuclear Technologies present during this process. The United Kingdom will work with its international partners and the IAEA to make these opportunities a reality, from the development of small modular reactors to meet our energy demands, ensuring that they meet the highest standards of safety and security, to the development of innovative nuclear techniques that promise to solve the most pressing global development challenges, such as tackling plastic pollution. In addition, we are studying potential for regulatory harmonization, such as through the IAEA’s “Nuclear Harmonisation and Standardisation Initiative” (NHSI).
However, Madam President, the decision to include nuclear energy in a country’s energy mix is not only made by politics and industry. The approval of the public is vital, and their opinions must be considered. We recognize fully in the United Kingdom that early involvement with local communities is crucial for garnering public support and informing policymaking.
To this purpose, we are collaborating with the Nuclear Decommissioning Authority to locate a site for a nuclear waste geological disposal facility. We have adopted a consent-based strategy, which requires a willing community to participate in the development of the project.
And ultimately, the community will get the last say. This is part of the United Kingdom’s commitment to the safe, secure, and accountable management of radioactive waste.
Permit me, Madame President, to conclude by restating. We are aware that current and future nuclear technologies will contribute to the delivery of a secure supply of low-carbon energy, which is in our collective interest. The Director General and the Secretariat can count on the support of the United Kingdom to realize this vision.
Thank you.