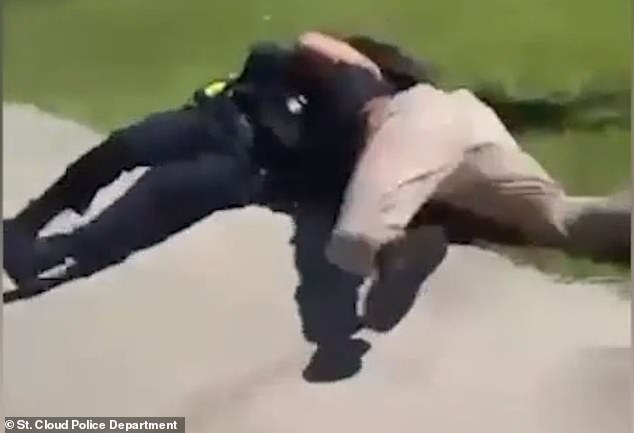 Unprovoked, a high school student body slams a police officer on a concrete walkway in a video that was first shared online.

Authorities say School Resource Officer Ball was separating two other students, both 14 years old, who were fighting when the unidentified 15-year-old went up to the officer and grabbed him by the neck.

According to St Cloud Police Chief Douglas Goerke, the student then allegedly dragged the officer away from the altercation, and the officer sought to handle the teenager “with the least amount of force feasible.”

The 15-year-old is then shown on camera putting his arms around a school resource officer and flipping him to the ground as shocked students at St. Cloud High School in Florida scream.

The youngster was then observed repeatedly body slamming and striking the officer before a school administrator, another school resource officer, and other students interfered, according to authorities.

FOX 13 reported that they were able to subdue the student until other officers arrived on the scene.

In the attack, neither the youngster nor Officer Ball were wounded.

Thursday, the student was arrested for battery on a law enforcement officer and violent resistance, according to the police.

According to FOX News, he is currently being held at the Juvenile Assessment Center in Orlando while officers seek to disclose body camera footage of the event.

The other two students involved in the altercation face pending charges of battery on a law enforcement officer and violent resistance to arrest.

He then continuously strikes the cop with his body until others separate them.

In a statement, Goerke described the video as “very frightening” and added that the attack was absolutely unprovoked.

“What happened to Officer Ball was horrible and never should have occurred,” he continued. We will never accept behavior that targets our officers, and anyone responsible will be held to the highest standards of accountability.

He further mentioned that Ball has worked at the institution for the previous 12 years.

According to his profile on the St. Cloud High School website, Ball formerly served for years in the United States Air Force and has been a St. Cloud Police Department officer for 18 years.

Officer Ball takes his job of campus safety and security very seriously and wants to ensure that students are secure and able to learn in an environment where they do not have to fear for their safety.

He considers it his responsibility to reassure parents that their children are safe when they send them to school; they should have no cause for concern