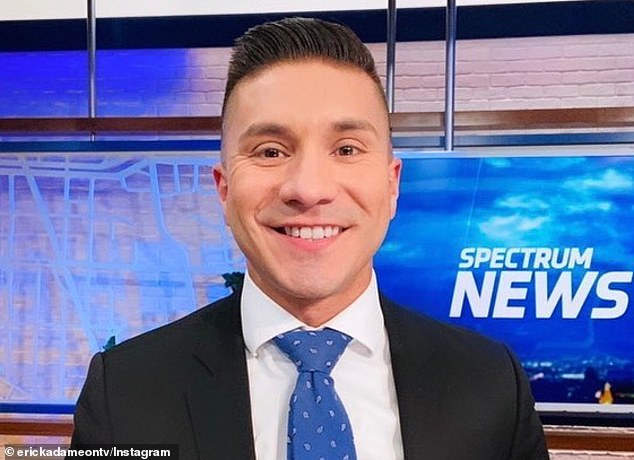 A Spectrum News NY1 meteorologist nominated for an Emmy was dismissed when a member on an adult webcam site got photos of him engaging in explicit behaviour and forwarded them to his boss and mother.

Meteorologist Erick Adame went to Instagram on Monday to explain his unexpected disappearance from the radio, stating that he had engaged in “compulsive behaviour” unbecoming of a public person.

Adame wrote in a long confessional article, ‘Despite being a public figure and being on television in the biggest market in the country in front of millions of people five days a week for more than a decade and a half, I secretly appeared on an adult webcam website.’

‘On this site, I acted out my compulsive behaviors, while at home, by performing on camera for other men,’ he wrote.

‘It was 100% consensual on both of our parts. I wasn’t paid for this, and it was absurd of me to think I could keep this private. Nonetheless, my employer found out and I was suspended and then terminated.’

‘It was absurd of me to think I could keep this private. Nevertheless, my employer found out and I was suspended and then terminated.’

Recent court filings indicate that despite the apologies, Adame has asked the webcam site to assist him in identifying the person who allegedly captured and distributed the sexual screenshots so he may file a lawsuit.

Adame was nominated for two Emmys during the course of his almost 15-year career, the last five of which he spent as a meteorologist at NY1.

In a petition filed with a Manhattan court on Monday, Adame requested that the webcam site, named only as Unit 4 Media, Ltd., be compelled to divulge the identity of the person who leaked the photographs so that he may initiate a lawsuit against them.

In late 2021, Adame allegedly utilised the ‘video chat service’ on the Unit 4 website, and an unknown user ‘wrongfully copied unclothed images’ of him ‘by taking screenshots’, according to the petition.

According to the complaint, the user then ‘wrongfully disseminated the images’ to his mother and employer ‘with the intent of harassing, annoying, or alarming’ and ‘tortiously interfering’ with his employment.

According to the petition, the acts of the user, who went as Sonal Prehonn, Funtimes99, Landenboy227, and Tommysize29 on the site, directly contributed to Adame’s dismissal.

However, according to court records, the website does not gather sufficient personal information about its users and hence cannot assist Adame in identifying the individual.

According to the Daily Beast, it is unknown which website Unit 4 Media, Ltd. truly is; nonetheless, the cam site LPSG.com states: ‘When you buy an LPSG membership it will appear on your bank statement as Unit 4 Media’.  LPSG stands for ‘Large Penis Support Group,’ and bills itself as ‘the most amazing open-minded fun-spirited sexy adult community.’

In his apology, Adame said he was receiving professional help for his behaviour ‘so I can make appropriate decisions that don’t affect those I care deeply about, as well as my career, as I move forward in my life.’

He further emphasised that he was not apologising for his sexual orientation.

‘Let me be clear: I don’t apologise for being gay or for being sex-positive – those are gifts and I have no shame about them.’

Adame closed by expressing his desire that future potential employers will not hold the event against him and instead concentrate on his extensive broadcasting experience.