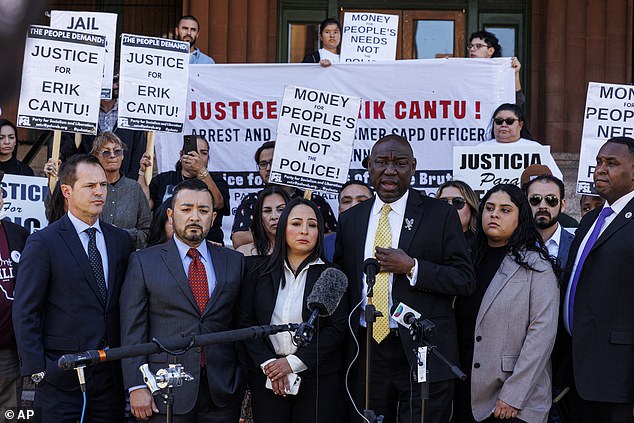 The family of a 17-year-old who was shot multiple times by a San Antonio police officer in a McDonald’s parking lot has revealed that he is afflicted with pneumonia and frequently hallucinates.

On October 2, rookie officer James Brennand, 25, shot Erik Cantu up to five times while he and a female companion were eating in Cantu’s 2008 BMW 1281.

His parents, Erik Cantu Sr. and Victoria Casarez, claim that he now has cardiac arrest if his pain medication is reduced. He also has hallucinations in which he simulates pressing a car’s gas pedal.

Due to his protracted intubation during his three-week stay in the ICU, he is also suffering from pneumonia.

Cantu Sr. stated, “These are the things that we must witness daily that no one should have to witness or feel.”

Cantu is anticipated to remain in the intensive care unit for at least three more weeks, and his condition remains severe.

Ben Crump, a civil rights attorney who has represented the families of George Floyd and Breonna Taylor, stated that the parents seek murder charges against Brennand. A civil lawsuit is not excluded.

Erik Cantu Sr. (left) and Victoria Casarez addressed the public for the first time after their son was shot in San Antonio.

Cantu, who was shot many times by Brennand as he sat in his car eating a cheeseburger from McDonald’s, is currently on life support after several of his organs were pierced during the shooting.

Cantu Sr. revealed that his kid now has frequent hallucinations, such as imitating a gas pedal while holding up finger guns.

Cantu sr. and Casarez discussed their son’s rehabilitation after James Brennand, a 25-year-old rookie police officer, fired 10 rounds into their son’s automobile, striking him up to five times.

Crump stated that he has not ruled out pursuing a legal claim against Brennand on the grounds that the officer violated Cantu’s Fourth Amendment rights.

Rookie San Antonio cop Erik Cantu, 17, was shot by James Brennand, 25, as he sat in his car in a McDonald’s parking lot.

According to Bexar County District Attorney Joe Gonzales, Brennand assumed Cantu was a suspect because he was “a Hispanic boy with a bowl cut.”

“That’s it,” said Crump. “This is why we are here.” Therefore, (Brennand) fired ten shots.’

Additionally, the family disclosed that additional body cam footage has not been made public.

Cantu Sr. recalled the video, adding that his son was yelling for his mother and stating, “I’ve been shot” while Brennand placed handcuffs on the injured teen.

Brennand reportedly replied, “Yes, you have, because I shot you.”

Since Brennand exhibited ‘no humanity’ in the unreleased tape, in addition to the officer’s bogus allegation that Cantu had struck Brennand with his car, Brennand’s family has demanded that his $200,000 bond be revoked.

Casarez stated, “No one is secure with him out on the streets.”

William McManus, chief of police in San Antonio, stated that ‘there is no doubt in anyone’s mind after watching that video that the shooting was not justified’ and that the body cam footage is ‘horrific’ to view.

In the body cam clip, Cantu is seen driving away as Brennand approaches the scene.

Cantu was placed in handcuffs by Brennand after he fired fire and as the teen was gasping for air on the pavement, according to DailyMail.com.

She told DailyMail.com that she is in a state of shock and also feels guilty because it was her decision to eat outside the fast food business that night.

Cantu, the man she is dating, wanted to dine inside, but she begged him to utilize the drive-through so they could eat in the car, according to insiders.

After collecting up their order at the window, they parked in the parking lot and Cantu took his first mouthful while listening to music.

When the officer observed the maroon automobile, he reportedly assumed it was stolen.

The police have confirmed that Cantu’s car had a license plate belonged to a different vehicle, but they have not yet determined whether it was stolen.

Brennand opened the door abruptly and insisted that Cantu exit.

According to San Antonio Police Chief William McManus, there is no doubt in anyone’s mind after viewing the footage that the shooting was unjustified.

Cantu’s family anticipates that he will spend the next two to three weeks in intensive care.

According to the girl, they were both astonished and terrified, unsure of what was occurring, sources told DailyMail.com.

As Cantu questioned the officer’s commands, he attempted to put the car in reverse, at which point Brennand fired multiple rounds into the driver’s side of the vehicle.

Four or five of the ten bullets fired by Brennand struck Cantu, who was attempting to flee in his vehicle.

As they drove away, the girl heard the loud cracks of gunshots. The group then halted a block away.

The girl assisted Cantu in unbuckling his seatbelt, and they both exited the vehicle. Cantu was holding his wounded arm, unaware that he had been struck elsewhere.

A source said, “He believed it was only his arm”

The source stated that he was shouting “help” and asked her to “call an ambulance.”

Cantu was injured in the abdomen, liver, diaphragm, lungs, and arms.

She held his head in her lap while sitting on the pavement. She observed blood gushing from his stomach and was also yelling for assistance.

Moments later, the officer caught up with them. According to the girl’s story, Brennand handcuffed Cantu behind his back and instructed her to turn aside.

While it is standard procedure for police to handcuff a suspect before administering aid in order to prevent potentially unruly behavior, several individuals close to Cantu told DailyMail.com that the officer’s actions were grossly inappropriate given that he was the one who shot the unarmed teen multiple times.

Additionally, they considered it odd that he would instruct his passenger to look away regardless of his motive.

The authorities have not yet released the cuffing bodycam footage. Brennand reportedly performed CPR while waiting for paramedics.

After turning himself in at the Bexar County Jail, he was subsequently charged with two counts of aggravated assault on a public servant.

The date of the hearing is November 23.