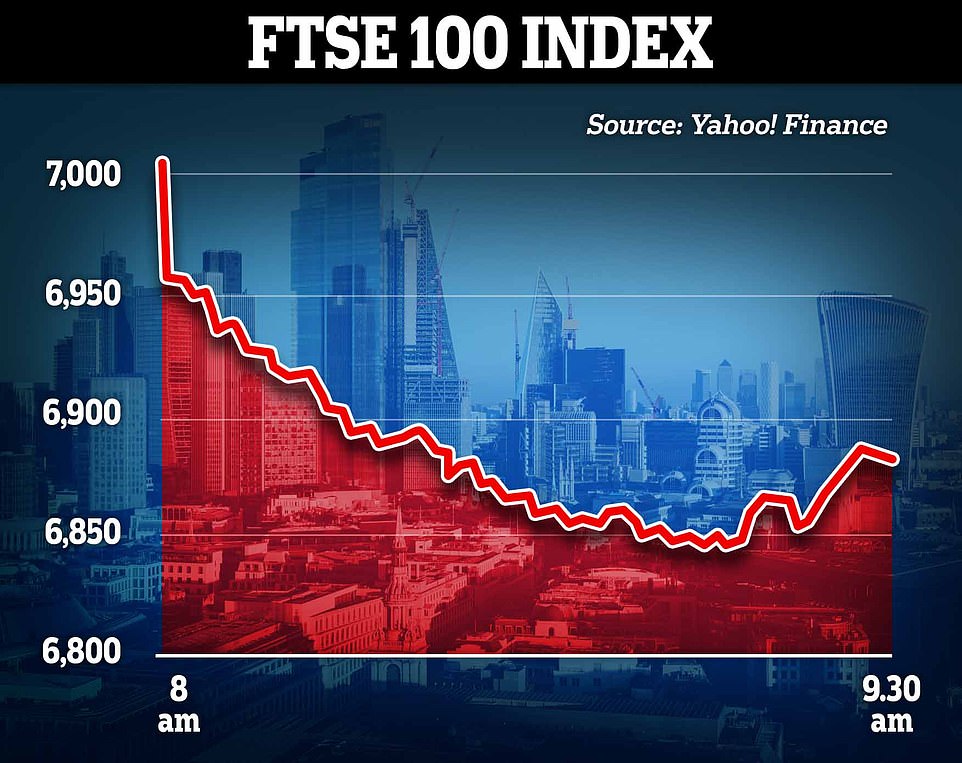 The effects of Kwasi Kwarteng’s mini-Budget are still being felt in the economy today, with the FTSE 100 falling by over 2% as the pound somewhat recovered to $1.10.

After Prime Minister Liz Truss defended her economic policies in a flurry of media appearances this morning, the pound rose from its low of $1.08 at 6 am to $1.10 by 5 pm.

But throughout the day, the FTSE 100 hovered around 6,850, far below the psychologically significant 7,000 threshold.

Ten-year gilt rates had decreased 50 bps to 4.01%, while two-year yields declined a similar amount to 4.24%. This occurred after a bond market intervention by the Bank of England (BoE) to prevent a brand-new financial crisis.

As many long-dated government bonds, or gilts, as are required will be purchased by Threadneedle Street in order to calm the markets, which have been rocked by worries that last week’s budget would cause debt to skyrocket.

According to MUFG analyst Lee Hardman, the BoE’s action “has undoubtedly escalated the degree of anxiety about the potential negative economic and financial market ramifications from the lack of trust in the UK’s public finances.”

Prime Minister Liz Truss finally spoke out after over a week of instability in the financial markets. She claimed she was prepared to take “difficult” actions to rekindle economy and stressed that the mini-Budget was the “right thing” to do despite the crisis.

She told several local BBC radio stations on Thursday morning that the approach they had outlined was the appropriate one.

Asked whether she would overturn the mini budget that stunned investors with the extent of its tax cuts and government borrowing, Ms Truss said: ‘I don’t accept the premise of the question.’

She added: ‘We are confronting severe economic circumstances. I do not dispute this. This is an international issue. But the UK government’s intervention and action at this trying moment is exactly correct.

As the yield on gilts began to increase once again, the PM said today that the government needed to take urgent measures to spur economic growth in order to defend her tax-cutting budget.

She told local BBC radio that the strategy was intended to improve Britain’s trajectory in the long run and that she was ready to make painful choices to support individuals and companies through what is anticipated to be a very challenging winter.

She claimed that the Bank of England and the government were in close contact.

When asked about the mini-budget in an interview, Ms. Truss said, “No, it isn’t because…the bulk of the package we released on Friday was the help on energy for people and companies and I believe it was exactly the correct thing to do.

She said, “I have to do what I believe is best for the nation,” and that she is willing to make tough choices.

The UK’s recession-threatened economy is expected to benefit from the budget’s significant tax cuts and energy price freeze, but traders were concerned that these measures will wreck the national finances and send bond rates skyrocketing and the pound plummeting to a historic low of $1.0350 on Monday.

The BoE action came after the International Monetary Fund lambasted the latest budget release, claiming it may raise inequality and aggravate inflation.

Last week, Chancellor of the Exchequer Kwasi Kwarteng provoked turbulence in the financial markets by announcing a proposal to slash taxes without addressing how it would affect the public finances or how the government would transform the economy to promote growth.

As a result of the falling pound and rising rates on government bonds, the BoE was compelled to resume its bond-buying program on Wednesday in order to support pension funds.

According to Ms. Truss, the government must act quickly and decisively to safeguard citizens’ homes and workplaces from rising energy costs.

That requires making contentious and challenging decisions, of course. The fact that we get our economy going is vital to me, therefore as prime minister, I’m willing to accomplish that.

Allies indicated prior to her public appearances that she had no intention of departing from Kwasi Kwarteng’s economic strategy outlined in Friday’s mini-Budget.

His plan to eliminate the 45p top income tax rate, reduce other taxes like corporate tax and national insurance, while increasing UK borrowing, has prompted demands for him to resign or be removed from office.

However, Ms. Truss is said to have disqualified herself from firing him less than a month into the job or making adjustments in light of the financial crisis.

Investors, companies, and consumers are now waiting for the government to provide more information about its plans to accelerate economic growth, which will be essential to repairing the nation’s increasingly strained public finances.

According to Tony Danker, director-general of the Confederation of British Industry, “markets and businesses will now judge the government on how serious they are about growth and about their fiscal responsibility to pay back debt on a daily, weekly, and monthly basis.”

Mark Carney, a former governor of the Bank of England, criticized the tax scheme, claiming that it undermined the bank’s attempts to fight inflation and caused instability in the financial markets.

Carney said to the BBC: “Unfortunately, having a partial budget in these circumstances—a challenging global economy, a severe financial market situation, and operating at cross-purposes with the Bank—has unfortunately led to pretty big changes in financial markets as we have all witnessed.”

The government will keep to its plan, according to Chief Secretary to the Treasury Chris Philp, to conduct a comprehensive fiscal statement on November 23 when it would provide more information on how it will reduce debt.

However, according to some financial experts, the government may need to make that declaration sooner to calm market jitters.

Capital Economics consultant Jonas Goltermann, a senior markets economist, stated: “I don’t believe (the BoE’s intervention) is going to be a long-term lift for sterling, but it may avoid an acute slump.” A further decline in the value of the pound, he said, is likely.